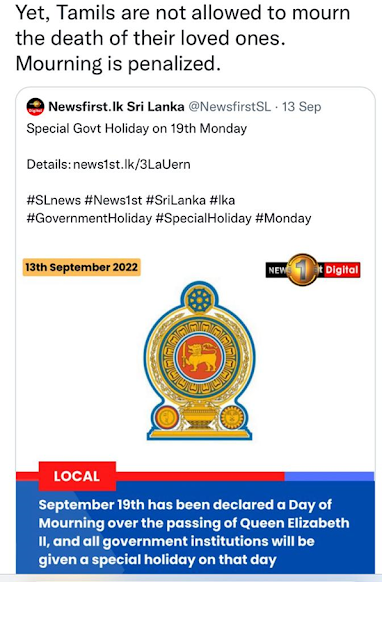 THE ONLY ME TAMIL

Significant number of Diaspora Tamils claim that the ethnic war, using weapons was due to Racial Discrimination. I also attributed Racial Discrimination as the reason for the pain I felt at the University of NSW. I fought on that basis in courts of law. They all dismissed me. My declaration began with the following letter:

This morning, in consultation with my husband, I made up my mind to return to Sri Lanka as soon as possible – to a place where I can perform as a Professional in all my creativity.

I heard Pauline Hanson on the 4 Corners Programme last night. Ms Hanson suggests that we go back to our countries of origin if we cannot be like them. It hurts that we even have to hear such things. In the name of ‘Freedom of Speech’ we – the new Australians are being made to lose our freedom to live as individuals. If the leadership of Australia is unable to turn it around – to make up for their negligence in failing to hear the cries of new Australians – one has to wonder whether Ms Hanson is expressing what these leaders (and employers) feel themselves in their heart of hearts. This is the million dollar question to which I have been seeking a favourable answer – that the leaders of the country to which we brought our children and made them call it their ‘home’ would ensure that it is ‘home’ for our children. But, my experience during the past 13 years has failed to deliver the answer that I have been seeking so desperately. When an educational institution such as the University of New South Wales also demonstrated that it was no different – I do not wish to waste any more time – hoping.

I am sorry if this causes you any inconvenience, but I am quite happy to handover to your satisfaction – to a person of your choice. I am not arrogant to think that I am indispensable. There are so many excellent Accountants in the market (might even ease the unemployment problem) and I sincerely wish you the very best – for you are a good leader.

The letter was written during Nallur festival.  There was positive sharing from many parts of the Medical faculty. I did prolong my stay but the more natural I was, the higher the level that the conflict was escalated to. When we are true, that truth escalates the conflict to the appropriate level. Mine was heard by the then Chancellor – Sir Anthony Mason – a law expert. The Chancellor ordered an investigation. That investigation did not seek and find the truth.

The Sri Lankan parallel of this is the escalation of the ethnic problem to UN level. But that has also failed to seek and find the truth.

The parallel of my Court actions are the cases filed against various politicians in Sri Lanka and beyond. In my case, I first shared my pain through emails to all concerned within the UNSW. Later it extended to others concerned, including the queen. I did receive a response from Mr Tony Blair  who was then Prime Minister. It made me feel connected. Likewise, I did get response from the UN once and I felt included. Often, in public life, we tend to expect returns as per the official portfolio. But that is theoretical. Being included is the real franchise to participate. If our participation is not expressly opposed, then we have the moral obligation to know that our ‘protests’ have been accepted.

In my Australian battles, I realised that my investments led me to have insight into the minds of those whom I opposed. It is that ‘insight’, known as the third eye in Hindu philosophy, that helped me realise that my pain and loss were escalated to ‘intuitive intelligence’. This meant that it was of exponential value to me.

This morning’s mail brought me the regular acknowledgement from our Australian Minister for Foreign Affairs the Hon Penny Wong whose recent service in including Pacific Islands is deeply valuable to me. As per my mind that inclusiveness resulted in the outcome indicated by Sky News as follows:

This morning’s mail brought also the following response from Trevor Jayatilleke who is in my UN list:

‘The circuit breaker for Sri Lanka's Debt Cycle lies in the Jaffna Peninsula and nowhere else in  Sri Lanka., and that is the crux of the matter. God (Hindu or non Hindu) places the solution to a crisis in the right place. You are right and our Politicians are ignoramuses or too shy to admit it and living in a fool's paradise.

To me, Trevor is a Common Sri Lankan and hence belongs in the UN list. But the solution is not as simple as Economic wellbeing.

Certainly not so, in the case of  one who laments that Tamils are not allowed to mourn in Sri Lanka.

I responded as follows to his group:

[Every citizen is entitled to –the freedom, either by himself or in association with others, and either in public or in private, to manifest his religion or belief in worship, observance, practice and teaching;]

It is highly likely that Sri Lankan police would arrest someone who is publicly mourning the LTTE or JVP. The reason is that they are respectful of their own who died fighting against armed rebels. To oppose rebels mourning publicly  is an endowment of such  a natural law.

If you are referring to war memorial in Jaffna University Premises being demolished, that alleged memorial was a disturbance to Education. Armed power is the Opposition of Intellectual power.  The memorial ought to have been in an area that was ‘home’ to the group. In the case of  civilians it was their family cemetery or places of ancestral worship in their own religious forms. To the LTTE it was the jungle areas of North.

Truth will lead us to the ultimate solution.
Posted by Austms at 11:46