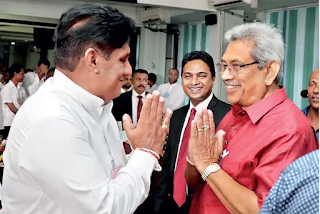 My search gave me the information that Dr Pethiyagoda is officially recognised including by Australians. His analyses are structured to suit intellectuals. The question is ‘Did these intellectuals foresee this collapse and if yes ‘what did they do to prevent it?’ As per Wikipedia :

[On 22 June 2022, Pethiyagoda was appointed Senior Policy Adviser to Sajith Premadasa, MP, Leader of the Opposition of Sri Lanka]

This confirms vested interest in opposing the Protestors. The Protestors are blaming the whole Parliament for the collapse. The way they measure is ‘effects’ based. One who is at policy level has the responsibility to measure through ‘causes’.

Dr Pethiyagoda blames Mr Gotabaya Rajapaksa for the collapse. The above picture taken in 2019 confirms to my mind – that Mr Premadasa was in his mind, an admirer of Mr Gotabaya Rajapaksa. When one genuinely and through Due Process available opposes the government at policy level, one becomes the true opposition of the government. That is how Democracy works, through the exponential power of Truth. The best example known to me is Mahatma Gandhi who became part of the labour class. He continuously opposed the British Government at policy / causal level. His actions were in the form understood by labour class. The invisible power was belief in Truth / God.

So far no Buddhist leader has highlighted the imbalance in Buddhism Foremost article in the Sri Lankan constitution. This means that at voter level, Buddhists would assume leadership over non-Buddhists. By accepting Buddhism Foremost article since 1972 – Sri Lanka became a Buddhist country where others were minorities. This President openly ‘showed’ that when he took oaths.

Eelam Tamils who in their minds live in separated part do not have the power to Oppose this. Only Sri Lankans who are neither Sinhala / Buddhist nationalists nor Tamil Nationalists have the natural power to exponentially oppose as Sri Lankan Opposition.

The Buddhism Foremost article in the 1972 Constitution was effectively to suppress JVP. It was NOT belief based. Belief is Absolute power and hence spreads itself. A true Buddhist would have naturally promoted Equal Opportunity principles – with or without constitutional support. The law is like senior relatives who raise our standards to the higher level than our belief. One who practices the law – would eventually believe at the level of that law. Parliamentarians who act in breach of the law under cover of their positions – keep lowering the standards of Sri Lanka to their levels of belief. That is where this President failed by entertaining those who desired wins over Tamil rebels. Given that this President confirmed commitment to Buddhist community – while carrying the karma of violent war – he invoked the real opposition of Sri Lanka – non-Buddhists. That was also a Constitutional protests. As I say and have been quoted – a wrong becomes a sin once we give up ownership. Sin – like covid – is exponential in its spread and cannot be corrected through current ‘rights’. Only positive karma in this can offset the sin.