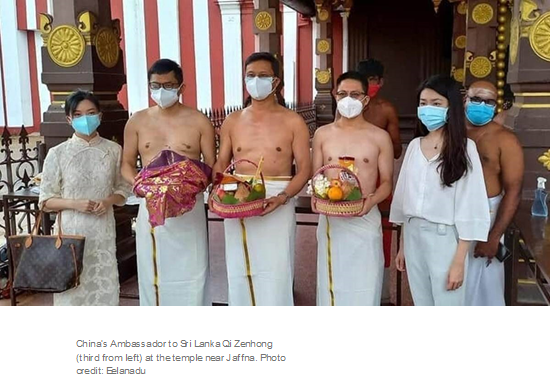 ‘The debate on the inclusion of religion and ethnicity in Sri Lankan birth certificates has been persistent while many welcomed proposals to include the term ‘Sri Lankan’ as opposed to ethnicity and religion.

Previously there were reports that ethnicity, religion and marital status of parents will be removed from the new birth certificate but was rejected by Registrar General N.C. Vithanage who stated that while regulations on not including the marital status of parents could be proceeded with, the requirement for race or ethnicity will continue’ – Ceylon Today article - Is Change Accepted?

This is an Administrative process. Who we are as per our own experiences is the ultimate declaration of belief. Until then – these processes are for the purposes of bringing about institutional connections of the mind. Common laws and rules facilitate this.

When we have too many subgroupings it dilutes the power of Opposition needed in democracy. Hence Tamil or Sinhalese ethnicity makes sense. This is also facilitated through the 13th Amendment to the Sri Lankan Constitution. In his article

‘Indo-Lanka Accord, 13th Amendment and the Tamil March of Folly’ DBS Jeyaraj states:

[ A news report filed by “The Hindu”s  Colombo correspondent  Meera Srinivasan provided pertinent details of the Colombo meeting. Here are a few excerpts -

“India has repeatedly asked the Sri Lankan leadership to ensure the full implementation of the 13th Amendment. While Colombo has in turn given many assurances to “go beyond” the legislation, to ensure meaningful devolution, “that has not happened so far,” said senior Tamil politician and Tamil National Alliance Leader R. Sampanthan. “We have gathered today from different political parties to discuss the situation. We exchanged our views on the subject, and will be taking this discussion forward,” he told a press conference, following the MPs’ meet at a Colombo hotel on Sunday.”]

Does India have rights over Sri Lankans? If the answer is NO – why did India have to sign an agreement?  Given that it was signed one needs to ask whether that is morally valid. This question needs to be asked especially due to Easter Bombings and the indicated connection with ISIS.

Politicians like Mr Wigneswaran are claiming Genocide while having done very little to improve Judicial Administration in North where he was Chief Minister.  Yesterday I wrote yet another letter – this time to the Public Trustee , in which I stated as follows:

Public Trustee to be sole competent authority in testamentary matters

Your early response would help us initiate legal action when we are in Sri Lanka in January.]

Our Colombo lawyer highlighted that the above law was no longer applicable. I then wrote:

[As a lay person, I was not aware of this. But to my mind, as per the laws of Truth / Dharma – the spirit of those who did practice that law brought this out. That mind of your professional elders including yourself to the extent you respect yourself are in Section 526 of the Civil Procedure Code which is commonly applicable to all Sri Lankans. The law in that matter was Thesawalamai law codified in 1707. As per my understanding - The Administration of Justice Law was enacted in 1973. This is like the a Great grandfather  being supported by a new born baby. The direct application of any law ceases within one generation. Beyond that it is the spirit of the law that works. To invoke that one needs true belief. This applies to religious laws also.]

The 13th Amendment, like Buddhism Foremost article in the constitution is for Government purposes and not for the People. The People are largely unaffected by both. But they helped the Indian and the Sri Lankan governments ‘find fault’ with each other. Now that the ethnic issues have escalated to global levels these two have become dysfunctional.

As per my experience, if we develop Federal structure, when would happen to Customary laws such as Thesawalamai law? Indigenous folks continue to need them. If Indian intervention was needed – then it confirms that the Vaddukoddai Resolution 1976 was false. But that declaration was homemade and this was confirmed through 1977 Parliamentary elections through which Tamils confirmed their Equal Opposition status. But the then President took it as the gods giving him the mandate to rule as king and hence the Executive Presidency which effectively took us back to the hierarchical system. That naturally blocked the path of democracy and resulted in Reverse autocracy by the unregulated mobs. We continue to suffer due to Reverse autocracy under cover of Democracy.

Given that we do not have a firm position about ourselves, others with vested interests invade our idle minds and thus was born the 13th Amendment.  More than three decades later we know that no one has expressed a NEED. Is India genuine in making out that it is essential for harmony in Sri Lanka and does so despite the Independent outcomes we have delivered as Sri Lankans? Which Indian leader is Common to both nations? That leader has the power to being about a merger. But such a leader will not ‘Tell’ Sri Lanka what to do.

One of the names mentioned in my communication is the Jaffna Mayor Mr Visvalingam Manivannan whose proficiency in Civil Procedure Code common to Sri Lankans is so weak that he would be open to Indians or Chinese making the rules for Jaffna. According to Ceylon Today – The Chinese Ambassador  visited the Jaffna Library and was accorded a traditional welcome. Mayor of Jaffna V. Manivannan was present at the welcome reception organised for the Envoy.

This confirms that both Indians and Chinese are taking turns to enter the weak politicians in North who have no identity of their own.