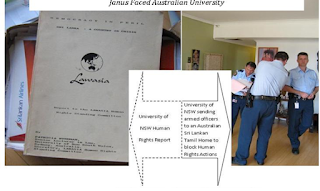 AUSTRALIA-LEARNING FROM OR TEACHING SRI LANKA?

[Australian Minister of Home Affairs Karen Andrews has informed President Gotabaya Rajapaksa that assistance will be provided to Sri Lanka to become an educational hub in the region.

Minister Andrews pointed out that this will be enabled by establishing educational institutions in Sri Lanka which provide facilities to students from other countries who wish to pursue degrees in Australia, to study basic stages of relevant courses in Sri Lanka.

The Minister made these remarks during the meeting held at the Presidential Secretariat yesterday (20), President’s Media Division said.

Plans are afoot to implement a special project in collaboration with the State Ministry of Skills Development, Vocational Education, Research & Innovations to develop vocational and professional skills. The amount allocated for this project is 12 million Australian dollars.

Ms. Andrews stated that the Australian Government intends to bring in Australian products to Sri Lanka to add value and re-export with the objective of developing Sri Lanka’s industries.]

I am a common citizen of Australia and Sri Lanka. To achieve this commonness I needed to forego Professional Benefits & Opportunities. I enjoy this commonness largely through educational investments based on my experiences at the University of NSW. The above picture was taken when armed officers unlawfully broke into our home to confiscate our household furniture and equipment – largely from Sri Lanka and India. The reason was to pay their legal bills in the Equal Opportunity matters initiated by me through court process.  It is through that commonness that I raise the question as to the timing of this collaboration.

Given that we Sri Lanka are an ethnically divided country – any ‘foreign’ investment in education, needs to be strongly focused on Equal Opportunity laws and Principles. On 20 December, I wrote as follows under the title ‘Ethnic Origin’:

[Does India have rights over Sri Lankans? If the answer is NO – why did India have to sign and agreement?  Given that it was signed one needs to ask whether that is morally valid. This question needs to be asked especially due to Easter Bombings and the indicated connection with ISIS. ]

Unjust discrimination eventually culminates into separations at physical levels and / or conflicts between cohabitants. The above article about Ethnic Origin was prompted by the news that the Chinese Ambassador had visited Nallur Murugan Temple in Northern Sri Lanka which is a centre of belief to majority Tamils of Sri Lanka. As per my own analysis – I concluded that China is also trying to woo Sri Lankan Tamils. This move by Australia indicates that Australia is moving to oppose China in this regard. The following communication with Dr S B Asoka Dissanayake would indicate how I made the connection:

Asoka: This is a rough sketch and man had been investigating mind control from antiquity.

Chinese mushroom was harvested in China which is known to produce psychedelic effects long before Afghans were cultivating opium.

My reason China not having a religion is related to their long use of mind altering drugs.

[The Philadelphia experiment and Mkultra funded many universities all over the world.

The original attempt was to train killer spies who assassin political opponents and then commit suicide.]

On 03 August 2019 – the Financial Times published my article headed ‘Easter bombings in Sri Lanka – Déjà vu? – which included the following:

[Yesterday I learnt about the Japanese suicide bombers who attacked Ceylon on Easter Sunday – 5 April 1942. Because Sri Lanka is my homeland, and because Easter is about resurrection, I felt a deeper connection between the 2019 Easter bombings and the 1942 Easter bombings.  There were many common features that would, I believe, help find a preventive pathway. In terms of karma – the cause and effect produce the common picture of truth – as if we are both in terms of time or place. The mind to which the whole of Sri Lanka is one place – would ‘see’ the time based connection: [The Japanese attack began at 07:30 on Easter Sunday morning. Air defence of Colombo Fort and Harbour was provided by the 3rd Searchlight/Light Anti-Aircraft Regiment, Ceylon Garrison Artillery with two batteries based at Galle Face Green and Mutwal. Colonel R.M. White and his operations staff officer, Major J.O. Widdows, DSO commanded ground units from ground forces headquarters at Echelon Barracks. St. Luke’s Church, Borella, was packed for Easter services with both locals and military personnel. According to parishioners, the vicar, Reverend Canon Ivan Corea, was preaching when the RAF Hurricanes engaged the Japanese Zero aircraft high above the church. The Sri Lankan writer Ariyadasa Ratnasinghe recalled the Easter Sunday Japanese raid: “Japanese aircraft flew in close formation over Colombo and dropped bombs at different places. The air battle lasted for nearly half an hour. The Allied forces, warned of the danger, were able to shoot down some of the enemy aircraft which fell on land and sea.” Among those shot down, one fell near St. Thomas’ College, one closer to the Bellanwila paddy fields, one near Pita Kotte, one on the racecourse in Colombo, one near Horana and one on the Galle Face Green. A bomb fell off the target and damaged the Mulleriyawa Mental Hospital, killing some inmates. It appeared that the pilot had mistaken the buildings for the Echelon Barracks. One fell near the Maradana Railway Station, partly damaging it. There were many deaths and more casualties, most of them civilians. To prevent bombs falling on hospitals, it was decided to have a large red cross painted on the roofs.  H. G. P. Jayasekera, President of the Ceylon War Veterans Association of World War II, wrote: “The April raids in Colombo were led by Vice Admiral Chuichi Nagumo and Commander Mitsuo Fuchida, the two men who inflicted the biggest damage on the mighty American Pacific Fleet. The Ceylon R.A.F. had only 20 planes as against that of 120 planes of Mitsuo Fuchida. These 20 fighter planes got off from the Racecourse grounds and there was an air battle over Colombo on Easter Sunday morning (5 April). Ceylon Garrison Artillery and Boys of Royal Artillery managed to shoot down many of the Japanese planes.” The Ceylon Daily News reported the raid on Monday, 6 April 1942: “Colombo and the suburbs were attacked yesterday at 8 o’clock in the morning by 75 enemy aircraft which came in waves from the sea. Twenty-five of the raiders were shot down, while 25 more were damaged. Dive-bombing and low-flying machine-gun attacks were made in the Harbour and Ratmalana areas. A medical establishment in the suburbs was also bombed] Wikipedia

So there were Japanese Suicide Bombers who attacked Ceylon back then, indicating the importance of this small island confirmed as follows also:

[Churchill quote on the Battle of Ceylon – Prime Minister Winston Churchill said: The most dangerous moment of the War, and the one which caused me the greatest alarm, was when the Japanese Fleet was heading for Ceylon and the naval base there. The capture of Ceylon, the consequent control of the Indian Ocean, and the possibility at the same time of a German conquest of Egypt would have closed the ring and the future would have been black. — From a conversation at the British Embassy, Washington, D.C.]

The first attack wave of Japanese planes took off in pre-dawn darkness (30 minutes before sunrise) from the aircraft carriers Akagi, Hiryu, and Soryu, moving about 200 miles south of Sri Lanka. The first attack wave of 36 fighters, 54 dive bombers, and 90 level bombers was led by Captain Mitsuo Fuchida, the same officer who led the air attack on Pearl Harbor. The Hawker Hurricanes of the RAF’s No. 30 Squadron were on the ground at Ratmalana Airport when the Japanese aircraft passed overhead. The auxiliary cruiser HMS Hector and the old destroyer HMS Tenedos were sunk in the harbour. The RAF and the Fleet Air Arm (FAA) lost at least 27 aircraft; the Japanese only five. The Japanese also bombed the mental asylum at Angoda, mistaking it for the fuel tanks at nearby Kolonnawa. After Fuchida and his aircrews returned to the flagship Akagi, a second-wave of 53 Aichi D3A Val dive bombers led by Lieutenant Commander Egusa took off to attack the two British cruisers Dorsetshire and Cornwall, 320 km (170 nmi; 200 mi) southwest of Ceylon, and sank the two ships. British losses were 424 men killed; 1,120 survivors spent hours in the water. The Japanese dive bombers scored hits with close to 90% of their bombs—an enviable rate of accuracy, according to Mitsuo Fuchida in Midway

The Chinese seem to be continuing after Japanese learnt their lessons.

It is interesting also to note the Cornwall connection. That I understood was the ancestral place of our current Australian PM.

My response to Dr Asoka was :

This contributes towards better appreciating the LTTE suicide bombers. As Nada highlighted - the Karthigai flower / Gloriosa Superba has poisonous effect as well as suicidal effect. It is also the National Flower of Tamil Nadu.

You state [The meditation teacher may add mind altering drugs in a session for coercion (I am made to understand some Indian Gurus do that surreptitiously). ]

The Caritas doctor – Dr Hayes kept on reducing my status by ‘telling me’ that I had left home without telling my husband. The young lady doctor who asked me questions before the arrival of Hayes – was soft and listened. After Hayes said that they had the authority to enforce medication I panicked. When the lady doctor came by herself to ask me , my husband’s phone number, I asked her not to give me medication. She said ‘we’ll see’ Then I panicked and prayed to Swami Said Baba. For my part I did not consume any food or water. The following day I refused even fruit. Later when I had counselling session with the kind nurse – and expressed my fear – she said they would not do that. Then I asked for her water and had some after almost 24 hours. Later in the prison cell I was with Florence who was ‘given’ medication. Florence said to me that at one time she was pinned down and injected with medication. Florence read the Bible and I concluded that I had the experience to help her come out of prison and go to her daughter. Florence was initially arrested for resisting Police who asked her to get rid of chucks but she refused.

It is scary but true faith in ourselves protects us. I believe that it was also my call through Yoga Swami to go to Vanni in 2003. This helped me become one of them and learn the truth naturally. Hence I am not fooled by LTTE supporters who use the outcomes for their own benefits. Mr Wigneswaran is such an example. It is then left to us to live with the costs that have become sins after LTTE eliminated itself.]

My question to our Australian minister is – Is Australia coming to Sri Lanka to teach or to learn. If latter – should they not pay a premium price to Tamil militants who became experts in suicide bombings. During my last stay in Vaddukoddai – I was approached by a Communist – to facilitate marketing of mushrooms already in cultivation. More recently we learnt about a resurgence of caste issue in that area. Communism played a significant role in reducing the effect of unjust discrimination on the basis of caste.

If we eliminate caste based discrimination in North would that facilitate Communism in Northern Sri Lanka and lead to separation from Tamil Nadu?

Does the Australian Minister seek to first address the Caste issue in North or Race issue in South? Will that they protect Sri Lankan minorities from being brainwashed with mushrooms ? This might lead to the issue of sexual abuse within the Church. Wikipedia presents the following:

[The 1976 Church Committee report found that, in the MKDELTA program, "Drugs were used primarily as an aid to interrogations, but MKULTRA/MKDELTA materials were also used for harassment, discrediting or disabling purposes.]