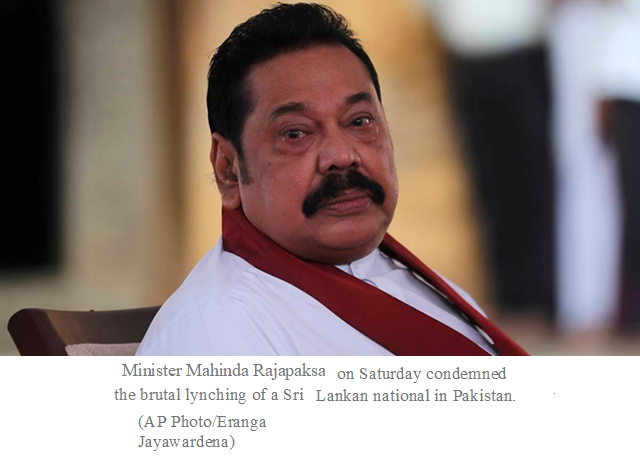 Did Priyantha Earn the Support of Sri Lankan Parliament?

[Sri Lanka’s Parliament and Prime Minister Mahinda Rajapaksa on Saturday condemned the brutal lynching of a Sri Lankan national in Pakistan and hoped that Prime Minister Imran Khan will keep his commitment to bring all those involved to justice and ensure the safety of the rest of the island nation’s expat workers.

In a grisly incident on Friday, Priyantha Kumara Diyawadana, who was in his 40s, was lynched and his body burnt by angry supporters of a hardline Islamist party which attacked a garment factory in Pakistan’s Punjab province over blasphemy allegations.] The Indian Express

The system that is common to Buddhists and Hindus is the system of Karma. More and more in the secular world are known to use this system – especially in a ‘free’ environment unlimited by human laws. As per my discovery – this system works at Energy level. Like in the case of the student who killed himself after doing the exam under the painting of ‘Man Proposes; God Disposes’ Priyantha seems to have effectively committed suicide. Wikipedia presents the UK experience as follows:

[The painting adopts the dark tones of Landseer's later works. The scene shows two polar bears among the scattered wreckage of the expedition – a telescope, the tattered remains of a red ensign, a sail, and human bones, which William Michael Rossetti called "the saddest of membra disjecta". The image shows humanity and civilization defeated by "nature, red in tooth and claw", and can be seen as a commentary on the crisis of British triumphalism and imperialism in the middle of the 19th century.]

The 2009 battle between the LTTE and the Sri Lankan Armed Forces was effectively a natural war between two tribal forces. The LTTE was a self-proclaimed guerrilla force. Under the Rajapaksa leadership – the Sri Lankan armed forces became natural Asura forces – free of Common rules and laws.

[  I am not an econometrist , but I feel that this government with all its short comings in administration , is the best bet we have now to run the country]

I responded to this as follows:

[I identify with this. This is due to Mahinda who is like Sakuni.  He is fair in his own way]

All those who use the outcomes that Mahinda’s group produced, own the ‘structure’ through which those outcomes were produced. Likewise those who use another group’s outcomes as if it were theirs. From Tamil Chief Minister CV Wigneswaran to President Xi Jinping – who invoked the Silk Road and got the Pandemic with it – ignored governors with natural powers – resulting in benefits of another structure being used as their own. Then nature invokes the costs exponentially. Hence the virus spread itself through its own mind at global level and continued war mode at Sri Lankan level.

Sakuni in Mahabharatham was the maternal uncle of the Queen who married the blind King whose children had majority power. Sakuni was a master in gambling with the dice – so much so the dice obeyed him. It’s like us using the mind to write programs that obey our commands. The big war surfaced due to Sakuni playing the game on behalf of majority. Had the Prince of that place played – he would have lost. The gamble in Sri Lanka was the money game which Mahinda was good at. Had he continued to invoke the money game, Indian Sakuni heirs /Paramparai would have blessed him against LTTE – as was the case before Mahinda became President. But Mahinda got hyperactive and ‘showed off’ to the world – that he defeated the guerrilla force by becoming a senior guerrilla force. The show off included grand ‘victory parades’.

Now, as per my discovery, the system through which effects are produced becomes of heritage value when we respect it and not when we use/consume it as current cost. It is an asset when we use it consciously with respect and as positive Energy when that cycle becomes ‘gratitude’ and therefore takes Energy form. The more benefits we take – the less there is for this Energy formation. Laws and Due Processes are like the water in a paddy field. The Varambu / Bund that preserves the water within the field is the structure formed by the owners of the field. The higher the structure the better the irrigation. Taking the effects through a different structure due to time and place variations – be they artificial or natural – eventually invokes the costs also as per that system through which the outcomes we  ‘took’ the were produced.  This is the fundamental principles of protection against plagiarism.

In Sri Lanka, the LTTE used Ellalan’s name to claim  his outcomes as  heritage and the current President used the name of King Dutugamunu. Tamils know that LTTE leader was NOT Ellalan heir in terms of higher level justice system. They were worlds apart in terms of Justice. Sinhalese heirs of King Dutugamunu – including President Gotabaya Rajapaksa recognized him at outcome level and failed to identify the heritage through the complete experience, in which King Dutugamunu’s son lost eligibility to the crown by marrying a ‘Chandala caste’ girl. This caste is the parallel of Paraiyar in Tamil culture.

The parallel of the above experience of Dutugamunu happened to Rajapaksa also when he took on LTTE as Opposition. His Political Oppositions were ignored and he took on ‘junior caste’ group as his Equal Opposition. As per Hindu Dharma it is unethical for one to fight with arms, against an unarmed opposition. Presented as follows in Ramayanam:

[Rama smilingly told Ravana, “I saw your valour. But now you have lost your Chariot, bow and you are very tired. Go back to your place and come tomorrow fully equipped. Then you will see my real warfare.”]

The LTTE was an unofficial force and lacked the status to use arms. To that extent they were unarmed and hence the war became unethical as per Hindu Dharma. This meant – a wrong was committed by denial of fundamental right. When left unaddressed, it became a debt, followed by sin. When People of different cultures marry – they have to take Equal position for the same reason. Hence the demotion of King Dutugamunu’s son who was demoted to Equal status as his bride. Likewise, Rajapaksas who demoted their status to the level of a force made up largely of junior caste combatants – as if they were orphans. All due to outcomes using the name of Buddhism.

Mahinda looks sad in the above picture. He probably knows that it is his return karma that is working against his clan. Tamils who failed to discipline their side also need to leave the issue to nature and its system of karma which always provides a better structure for us when we surrender to nature and not when we fight against nature – as we know through the saying  ‘Man Proposes; God Disposes’  which is about membra disjecta / scattered remains of the war. Yet another lesson learnt through the lynching of Priyantha Kumara Diyawadana.