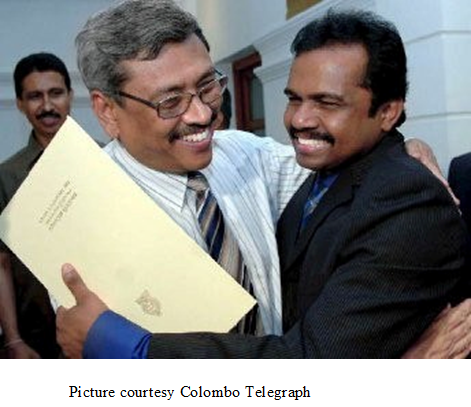 Karuna was effectively renamed Freedom Fighter by the Rajapaksa government when he was made Minister for  National Integration in their government. The above picture shows that the current President was happy to have Karuna on his side. Unless the LTTE terrorised after 09 March 2009 – the Rajapaksa government did not have the Dharmic (moral) authority to punish them – including through death. Given that article 9 of the Sri Lankan Constitution requires the State to foster Buddha Sasana – which I believe would lead to truth – any punishment rendered in the name of  actions prior to 09 March 2009 is in breach of the fundamental duties as per the Constitution.
On 25 January 2008, the BBC reported under the headlines ‘Renegade Tamil rebel jailed in UK’:
[In court on Friday, Col Karuna said he had received the false diplomatic passport from the Sri Lankan government.
He said the defence secretary in Colombo, who is also the brother of President Mahinda Rajapaksa, had arranged the documents for him.]

Given that the government did not deny the above or challenge the BBC, one is entitled to conclude that it is based on fact. Given that the current president supported his brother who rewarded Karuna, one is entitled to conclude that he was part of the ‘bribe’ paid to Karuna to switch allegiance. This breach of fundamentals of warfare including tribal warfare confirmed that war crimes were committed during the period March to May 2009. One does not need any international court once one’s universal court – the mind driven by truth - delivers that judgment.

If one does not believe in the national or global judiciary – but continuously believes that crimes were committed Natural Justice takes-over. Such a believer need not have knowledge of law beyond her/his environment. All s/he needs is her/his conscience based thoughts shaped by the common law of her/his environment. Natural Justice does the rest.

On 27 October 2015, I wrote about the ever shifting mind of Karuna under the heading ‘Democracy Going with the wind’ – at - http://austms.blogspot.com/2015/10/gajalakshmiparamasivam-27-october.html
Am I surprised by Karuna’s latest declaration – that he killed soldiers? No! Karuna knows his powers and so long as he in his mind, is a freedom fighter as per his environment - he would not be  afraid of death. Likewise, the current president, in his own environment. The moment they become politicians – they become fearful of losing the next battle. That fear is already showing in the current president – and many have highlighted it already – each from their own angles. Politics is an alien environment to the current president.

Since  I do not have any official portfolio – I am free to identify with them through the pain of the victims of their actions. As per that assessment – Karuna is NOT GUILTY under the current government; nor are the Easter Bombers for that which was invoked by Buddhist supremacy claim,  capped by the then government’s negligence of secular duties. By pardoning on 26 March 2020 Staff Sgt. Sunil Ratnayake who was found guilty in 2015 of killing eight civilians, including a 5-year-old, at Mirusuvil, in northern Sri Lanka, in 2000, Mr Gotabaya Rajapaksa confirmed that he did not believe in the Sri Lankan Judiciary.

As per the timing - Karuna’s elevation as well as Staff Sgt. Sunil Ratnayake pardon were for political purposes. This automatically demotes the institutional values of the Presidency. Any pardoning by the Governor needs to be belief based and on behalf of the whole. If Sri Lanka is sovereign, the value of the Presidency is equal to the total value of the citizens. The pardon becomes part of that Sovereign force only when juniors get lesser punishment than seniors in a group. Pardoning  Staff Sgt. Sunil Ratnayake limits the level of order in the armed forces to his level. It is disrespectful of the more disciplined members of the armed forces who did not cross their position lines.

If the Sinhala Buddhists continue to uphold this government – then we would have more suicides of intellectual Sri Lankans who have no pathway to develop belief through higher Common Law. Effectively, Rajeewa Jayaweera was killed by Covid19 which blocked the pathway to intellectual management of his ill health through the mind connection to Health experts. Now that they are under the armed forces – that pathway is blocked to intellectuals. These are equally application to the Tamil community driven by armed forces. We have to first release ourselves from the profits of war. Then the political pathway will become the highway to reliable governance.