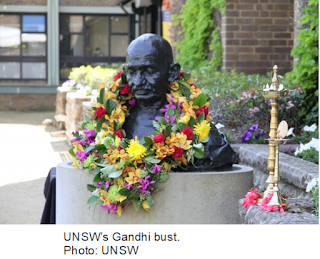 This morning’s mail brought me the following message:

[Ranil Wickramasinghe, Prime Minister of Sri Lanka, made  a statement (below) praising the JVP even while the JVP was launching a no confidence motion against him and his government.
I have always believed this man is extraordinary and statesmanlike.
He is slander-proof and praise-proof-much like the leader in the Dammapada. He stands unshaken and believes in what he does. He has no desire to amass fortune, not because he is rich on his own, but also because he has no inheritors to pass wealth onto. People slander him but he remains unruffled………………………………….
Prime Minister Ranil Wickremesinghe has said whatever the political party heads the next Cabinet, the Janatha Vimukthi Peramuna (JVP) must represent it. ]

To my mind, while Ranil is holding the position of Prime Minister – which has strong executive powers and not that of governor to ‘forgive’. Mr Sirisena forgave  Buddhist monk Gnansara Thero while he holds Executive Power as Minister of Defence. If they seek to be ‘soft individuals’ they need to renounce the Executive part of their leadership and follow Lord Buddha’s pathway and not Administer but facilitate the citizen to self-govern.

To the extent Ranil recognizes the importance of JVP in politics – he has the DUTY to recognize Tamil as well as Muslim militants in Sri Lanka also as being important contributors to the Parliament. They know the ground reality.

The writer who declares that Ranil is Dharmic goes on to refer to the following:
[Prime Minister replied on the floor of parliament to JVP leader’s questions during the NC debate;
“There is no sofa. Sofas will be available in the lounge out there.”
He said discussions were going round regarding updating the SOFA agreement entered into by Gota. They will next be presented for cabinet approval and from there to parliament for approval. Right now there is no SOFA.]

SOFA – Status Of Forces Agreement – with the USA is at the centre of discussions in parliament. The question is ‘what would it mean to the common Sri Lankan?’

The above writer whose work is regularly published by the official media, states:

[What a magnanimous leader Ranil is to praise the JVP as having honest leaders and the party as being a disciplined one! Ranil said he hoped the JVP will be in cabinet when the next government is formed-whoever wins government.
I have always held that Ranil is the only statesman Sri Lanka has]

But a deeper study would confirm that Ranil is giving the message that it would be more convenient to tap the intelligence of the JVP and therefore ‘would be militants’ if they were part of the government. The clue is in the following:

[A team of US counter-terrorism experts is reported to have stressed at a meeting with Prime Minister Ranil Wickremesinghe the need for stricter border control and coast guard to ward off terrorism.
The team led by US Ambassador Alaina B. Teplitz called on the Prime Minister on Tuesday evening and briefed him about measures taken by them to counter terrorism after the 9/11 attack. They said terrorists would fear any attempt to infiltrate a country whenever there was rigid border control and coast guard.
The Prime Minister reportedly informed them that the government was planning to establish a counter-terrorism centre to coordinate intelligence operations and take action.]
According to a source privy to talks, the US experts said that they had practical difficulties in trying the terrorist suspects, arrested after the 9/11 attack, in civil courts. They said terrorism was not a normal crime to be tried through the ordinary civilian court system, and therefore they had special arrangements to prosecute such suspects.]

Most of the militants tend to be ignorant of the law. Hence when they are punished by law enforcement authorities – such authorities would seem alien to them. It would be difficult to try them in civil courts through laws that are for those who accept the authority of the government and the judiciary to administer and punish them. Suicide bombers confirm that they protect themselves from such leadership that they do not believe in.

I learnt about this mental order by living as part of the village of toddy tappers in Northern Sri Lanka. When I complained to the police against some youth – after my roof was stoned, one of them explained that it happened to all of them regularly – when they went against someone. That is their way of protesting against such discipline.  As per Dharma a leader must feel that the one being disciplined is part of her/himself. When such a leader is seriously hurt by the junior – to the extent that junior is out of the circle of belief of the apparent senior – the leader would tend to punish the offender excessively. Hence Americans need special system to try those who are by law insiders but as per truth are outsiders.

In Sri Lanka – by law Non-Buddhists are outsiders to Buddhists. The reason is article 9 which allocates senior position to Buddhism. To many the value  may be just the paper that it is written on. The Government prosecutor asked me in relation to trespass – whether I considered the ruling by then Vice Chancellor Professor Wainwright – to be not worth anything more than the paper the order was written on? The order was for me not to come into the University of NSW to seek to speak to the Vice Chancellor. To me when I did so seek – it was an act of Peaceful Protest. But to Professor Wainwright – it was vastly different to the unwritten internal autocratic laws of obedience that he was used to – especially from migrants driven by money and status as quickly as possible. He thus became the militant whilst I was well within the law. But I had to lose my hard-earned status to prevent militancy. The University in turn became more aware of the ‘terrorism’ problem including through Sri Lankan student – Nizamdeen.

On  01 November 2004 – Gandhi himself confirmed his blessings of my work to uphold my truth at the University of NSW. This was manifested by Dr Peter Vaux who stated that I was following in the footsteps of Gandhi. I was sent to the Prince of Wales hospital to be assessed for mental illness. Later I found out that Daily News (Sri Lanka) published on the same day my response to Justice Weeramantry on the Relevance of Ahimsa. http://archives.dailynews.lk/2004/11/01/fea03.html

That was how I learnt  directly through the system of truth that Gandhi had blessed me. Back then I was sent to prison. But since 2012, that very University of UNSW started celebrating Gandhi day – as if they are the custodians of  the power of Gandhi Power! Each time they do that without making amends – they curse themselves. That is how militants become Terrorists at the University of NSW. Our wrongs become sins if they are not corrected under current structures  including through compensation to the victims. Correction and compensation including taking junior position to the victim – leads to sharing pain and therefore becoming one. Until then the wrong remains – as negative energy to make militants look like terrorists.

One such orator at the UNSW - Peter Greste, the Australian journalist jailed on confected terrorism charges in Egypt, to my mind has been blessed by Gandhi. Peter stated during his UNSW Gandhi oration in 2016 :

[As I discovered in Egypt’s prison system, a lot of radicals who support Islamic State want a war.]

Those who punish radicals need to have the authority of their truth to do so. When the punisher carries preconceived prejudices against the punished – and the punished is Not guilty as charged – the punishment returns to the punisher.  Peter explains it was follows:

[But, Gandhi went on: “If the control is from without, it proves more poisonous than want of control. It can be profitable only when exercised from within.”]

To the genuine militant, the power of the law is foreign power. Unless therefore the punisher feels the pain of punishment  as if the punished is part of her/himself – it is better to not have that power to punish and/or have the law that measures rights and wrongs.

While journalists reward or punish politicians through their own published work – for which Peter was punished in Egypt – they need to make politicians ‘internal’ . That is when their work becomes valuable to the whole. Citizens who are part of the government would be named Freedom Fighters – whilst those who are ‘outsiders’ would be named Terrorists. Peter presents this as follows:

[Even the word “terrorist” is a problem. The BBC tells its journalists never to use the “T” word in their reporting because of the old cliché “one man’s terrorist is another man’s freedom fighter”. And if our reporting is to be genuinely neutral and fair we’ve got to stick to that difficult middle ground in the words we use.]

That is how JVP is included in government by the Sri Lankan Prime Minister  but LTTE remain terrorists. To the extent Tamil Community shared their credits and included militants – they would feel the ‘terrorism’ accusation to be theirs. To the extent the Government does not feel that pain – it gets separated from that community. How can the government then be relied upon to operate under Unitary structure?

Peter quotes Gandhi again :
[As Mahatma Gandhi once said: “In a true democracy, every man and woman is taught to think for himself or herself.”]

Likewise every institution – starting with Universities. Except for Peter, I could not find any other UNSW Gandhi Orator – I could identify with. Many produce hearsay effect; some contribute to intellectual development; but only a few have the Gandhi experience. They bring Gandhi power by experiencing Gandhi pain at that place. In Peter’s case he experienced it in Egypt and is bringing the lessons to UNSW Australia as positive energy.

Finally – when Ranil declares LTTE’s value as being parallel to JVP – then to my mind he is following Buddha. Ranil failed to uphold Tamil Political Leadership in Parliament despite getting Tamil support to reinstate him. That confirmed lack of investment in Democracy.