Sri Lankan journalists seek to protect their Independence.  How deep is their commitment to respecting the independence of others including contributors through De facto social media? An officially recognized journalist TOLD  me as follows, in response to my article ‘Rebirth time for Sri Lanka’

[Please unsubscribe me from your mailing list . This is the fourth time I am telling  you and I will not be telling you again !!]

Mr Ravi Ladduwahetty, by copying others in the list was confirming that this was a Public issue:

2.     Are the official media of higher status than De facto media?
3.     If yes, as per what law?
4.     If No – is Mr Ravi Ladduwahetty guilty of abuse of ‘freedom’ of expression as provided for in article 14 (1)(a) of the Sri Lankan Constitution as follows:
14. (1) Every citizen is entitled to –
(a) the freedom of speech and expression including publication ;
As per my observation, except for Sri Lanka Guardian, my work is not regularly published by mainstream media. But the fact that I feel motivated by my own Energy and those of others who from time to time seek my advice and successfully address their own problems, confirms to me the current value of my work.  The proof is in consumption at one level or another. Majority may not understand intellectually the connections I seek to show as per my own experiences. But to the extent they are in need – they would identify with me as a possible source of the solution they need. That motivates me continuously.

On 10 November 2018, I published the following through my article headed ‘Truth becomes true law in Sri Lanka’: 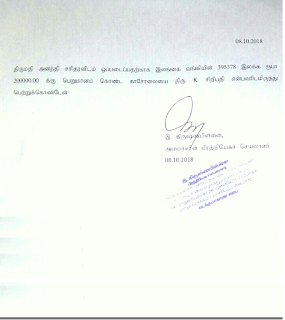 [This week I received emails inviting us to donate to prevent war-widows who were selling their kidneys to survive. The invitation came with the note shown above. It translates as one Mr Krishnapillai – the Minister’s special secretary having received Rs 200,000 from Mr Sripathi, to be handed over to Mrs Ananthi Sasitharan. The memory that my Truth invoked was that the then Tamil Nadu Chief Minister M G Ramachandran who earned big brother  status from LTTE leader  Prabhakaran received the kidney of a young relative. Money that does not go through common values of our positions, come with the true values. Hence the kidney sales by war widows who are the parallels of the poor relation of Mr MG Ramachandran.
As of now, Mrs Sasitharan is yet to demonstrate  appropriate structures through which these donations would be processed to make them ‘Service’ to the whole.]
http://austms.blogspot.com/2018/11/gajalakshmi-paramasivam-10november-2018.html 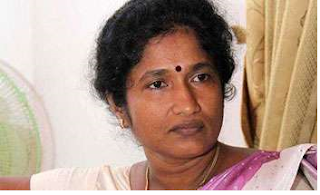 Whether Mrs Sasitharan is found guilty or not – the inquiry would go towards establishing more regulated pathways in relation to ‘donations’. Pampered communities  become indebted communities.
Is Mr Ravi Ladduwahetty such a pampered journalist? Am I a true journalist ? Yes I am. Hence through that ‘insight’ I have learnt that Mr Ravi Ladduwahetty sees me as a ‘junior’ who is to be ‘told’ where her place is. Such assumption happens when we owe someone in that issue. The lessons / knowledge I need comes to me – including from cyber space – in confirmation of my own true independence. The credits I did not wait for – raised me to the level of ‘policy’ as per my motive. Those who are seeking respond. Where there are no current takers the value stays and self-accumulates – until there is someone in true need.

The work of truly self-determining Tamils was brought to me this morning while I was writing this – through a video clip of Tamil actor Sivaji Ganeshan bringing to life the message of  well known Tamil Nadu Chief Minister the Hon Karunanithi. The script was changed to suit Mr Sirisena – lamenting about why he has been put on trial – including by Mr Rajapaksa and Mr Ranil Wicremesinghe. The part I love best in the original is the one where Savaji says – about his sister ‘she ran and ran to the edge of life itself’. In the clip that came today, Mr Sirisena is allegedly lamenting ‘I ran and ran – from Mahinda and Ranil - to the end of Galle Face Green!’

That was my reward today, to keep going with my Service work. One who ‘tells’ the true service provider becomes the junior. That is the way of Truth. It’s to prevent such return that we have Equal Opportunity Laws in multicultural societies. When we practice such laws we protect ourselves from such returns which are the other side of our  desires – in this instance to use Authority – as Mr Ravi Ladduwahetty has done. In terms of media – the Tamil media brought to life the Political Artist the DMK Chief “Kalaignar” Karunanidhi. This means blessings to artists who have made investments in politics also. An independent person derives her/his own returns – often without being conscious of it.