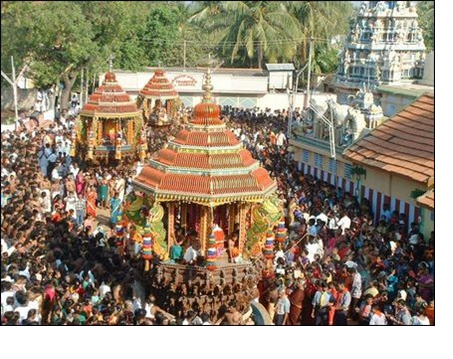 Today is the first day of the festival of Mother Kali temples at Sangarathai-Vaddukoddai and Trincomalee – the place that attracts ‘foreign’ powers due to its natural harbor. As per the Sunday Times article ‘Trincomalee’s long road from ethnic conflict to ethnic harmony’:

[In this eastern district, where the strategic port city of Trincomalee, the administrative capital, appears as an ideal ground for national reconciliation, more people now turn up at police stations to lodge complaints in a sign of increasing public confidence in the police and the judicial system.]

One could therefore conclude that the author admits to the lack of Police service to have contributed significantly to the ethnic conflict. My investment in Trincomalee was work related – through Prima Ceylon Ltd. Prima is a big business organization  in Singapore and I believe I added value to Prima through my services while working in Prima. Years later, when we purchased a unit in Coogee-View apartments here in Sydney, Australia - I was pleasantly surprised to learn  that Prima was the owner-developer. This further confirmed that my ‘ownership’ work while in Prima was not lost when I  left Prima to join the National carrier – Airlanka. My true investment in Prima traveled beyond time and place borders to support me in Australia. I felt the blessings of Mother Kali of Trincomalee when I had a dream about my life beyond Sri Lanka. This meant also that Trincomalee was ‘home’ to me – just as Colombo and Jaffna were. Likewise, Vaddukoddai due to my ownership-investment in my husband’s family. Today, on this auspicious day,  I pay homage to both cities.

The above observation about the People accessing the Police Service more and more now, needs to be read in conjunction with the following observations in that article:

[Trincomalee businessman Nishantha Abeywickrema said: “All communities lived in harmony in this district before the war, but now we see that communities live in isolation, confined to their respective villages. The interaction is not the same as it used to be.”]

The way I read this, before the war People of Diverse cultures were not aware of the need to interact with each other, while after the war – they feel obliged to do so. Once we have knowledge of the law and its custodians, we are tempted to use them. Once we use them – mentally and/or physically, we become relatives. To the extent we are disappointed with them – we separate ourselves and live away from them – as I do even now with those of my biological relatives who give preference to the physical above the mental and the ‘Common’.

Both side leaders in the ethnic war were limited by their biological relationships and their irredeemable actions and policies that others acted upon – remain as Energies – positive as well as negative – affecting all those to whom that place is ‘home’ and more importantly all those who ‘claim’ that place is their home. Mother Kali is the personification of Courage to act physically. Both these cities carry that power for better or for worse.

Those to whom these places of war are ‘home’ would be Natural with the positives and negatives – as the People of Thunaivi in Northern Sri Lanka are. But if they went / or were taken to the Police – they would not know how to construct their case as per the law. Under those circumstances – the matter will be constructed as per the interpretation of the Police and unless the Police consider,  the persons concerned as their higher relatives than the biological relatives through families and members of their community – the judgment of the Police is likely to be as per their own cultural values. A person with higher education for example needs to consider others with investment in higher education as her/his higher relative than one with biological ties but without investment in higher education. To an officer, a higher relative must rank before a biologically closer relative.

The Sri Lankan ethnic war deteriorated to the lower level of using arms – due to both sides using the lower  personal approach in preference to the higher common approach. Today, an Australian reader wrote in response to my article ‘LTTE Killing Rajiv Gandhi - Mistake or Natural?’ :

Having lived with the People of Thunaivi-Vaddukoddai  – as part of that community – my response is NO. Most of the People of Thunaivi react emotionally and would expect to be killed even when they set out to kill the other side.  It is animal behavior alright but ‘murdering terrorists’ – NO. One who has knowledge of right conduct as per her/his own environment with fairly comfortable access to the law – and sees the events through such eyes - would find it easier to mark these guys wrong – and label them as murdering terrorists. Not one to whom that place is ‘home’ through common faith. If the above Australian were part of the ‘Hybrid’ system of judgment – including at social and Australian political level, such injustice would be a negative force for Australians who are active in this issue.

Truth when written from within – through our own experiences – is the measure at the individual level. Reconciliation is needed by those with official positions of responsibility. Majority Australians of Sri  Lankan origin – do not insist on Equal Opportunity practices here in Australia. They accept the lower status and make up the loss through ‘Community-structures’ and their financial freedom. Devolution as per cultural diversity prevents such ‘expectations’ and therefore disappointments.

In Sri Lanka – at the official level – any reconciliation needs to include Buddha Sasana due to Article 9 of the Constitution.  Accordingly in terms of the actions of the armed forces – this test also has to be applied to their actions and/or non-actions in attacking the opposition. Judges without knowledge of Buddha Sasana  are disqualified due to Article 9.

On the basis of Equal Opportunity principles facilitated by articles 10 and  14 (1) (e )  of the Sri Lankan Constitution, a non-Buddhist Sri Lankan has the right to be heard on the basis of her/his religious belief when interpreting the law as well as ‘facts’. In terms of Reconciliation – one side does not have the right to speak for the other – but has the authority to declare independently – its own claims as per its own interpretation of law and facts as experienced by that side. Separation is needed for this the exercise of independence. Without such separation – reconciliation would not be legitimate even if accepted by those concerned as happens here in Australia.

Where the level of Truth discovered is higher than the ‘facts’ reconciled – Devolution of power in regards to the issue of use of arms is a legitimate claim of  minorities who have established this claim.
Posted by Austms at 16:01