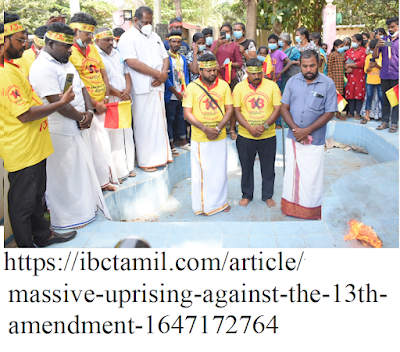 My attention was drawn to IBC report on the protest against the 13th Amendment to the Constitution of Sri Lanka. As per that report at https://ibctamil.com/article/massive-uprising-against-the-13th-amendment-1647172764

As per that  report, the blessings of Vanniyar Chieftain Pandara  Vanniyan were sought at the beginning of the procession. The protest is reported to have been organized by TNPF - Tamil National People's Front headed by Mr Gajendrakumar Ponnambalam – the grandson of the Hon GG Ponnambalam who sought Equal Rights for ethnic minorities in National Parliament. Now that has evolved as  TNPF policy of Two Nations One Country.

To my mind, the 13th Amendment confirms this status through language policy. One therefore is entitled to question the need for such a protest. Today I responded as follows to a group of high thinkers:

[Knowledge becomes wisdom when it is shared on the basis of genuine need.

Any knowledge  in  excess gets hoarded and becomes obsolete. Knowledge from senior to junior becomes Shakthi / Energy  that preserves Itself]

The senior in this instance is the Hon GG Ponnambalam. To my mind that Political elder would NOT have sought the blessings of Vanniyar Chieftain Pandara  Vanniyan in terms of law. His mentors were largely British.

The 13th Amendment confirms that Tamils have the blessings of India, which includes Tamil Nadu in its governance structure. Most Tamils of Sri Lanka continue to practice the culture inherited from India. To that extent we have Sovereign status of the original. It is a natural status that protects the heir from exploitation.

Heritages are formed through sacrifice of immediate benefits. One who uses heritage for current benefits, naturally invokes the sacrifices as current costs and does so exponentially. To my mind the Silk Road Heritage was used by the current Government of China in its One Belt One Road project and we  got the Pandemic.

Tamils who abuse our Political heritage lose the protection of  Sovereignty and get exponential costs.