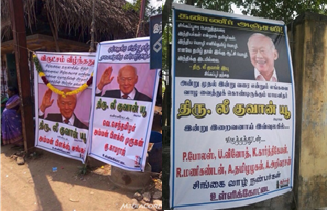 [Many homes in the region, known as Thanjavur delta, share an emotional bond with Singapore's founding father Mr Lee Kuan Yew. Several parents from the villages of Kooppachikottai, Ullikottai and Paravakottai have sent their sons to earn a livelihood in Singapore.

NEW DELHI: Several villages in the southern Indian province of Tamil Nadu are remembering Mr Lee Kuan Yew. Though these villages might not even be easily visible on a map, people there know who Singapore's founding Prime Minister was.
Though these people had only seen Mr Lee Kuan Yew in pictures, they had heard great stories about the city-state's first prime minister. And, many homes in the region, known as Thanjavur delta, share an emotional bond with Mr Lee.
Several parents from the villages of Kooppachikottai, Ullikottai and Paravakottai have sent their sons to earn a livelihood in Singapore. The families of rural Tamil Nadu look up to Mr Lee as a man who provided them with an opportunity to escape poverty.
A villager from Ullikottai said: "Our survival, my survival and my family's survival, we are all alive today because of Singapore. I went to Singapore at the age of 18 and was able to earn a living by working hard. It's because of Singapore and Mr Lee Kuan Yew, Mr Goh Chok Tong and Mr Lee Hsien Loong that not only this village but adjoining villages were able to survive."
Another villager from Ullikottai said: "If we have reached to this level in life, it's only because of Singapore and Mr Lee Kuan Yew. We are feeling the pain of his demise as if one of our family members has passed away. He was like a guiding light for the people in this area."
Money earned by migrant Indian workers in Singapore and sent home has helped provide electricity in one of the most under-developed regions in India. As night descends, the families huddle to pray for the man who dramatically improved their living conditions. For many of the villagers, Mr Lee will continue to live in their hearts.
- CNA/ir

To me this is the value of Nationalism.  Tamil Nadu has gone global through these true feelings of gratitude by villagers whose young ones found employment in Singapore and supported their families in Indian villages.  This applies also to quite a few Jaffna Tamils – including  from Vaddukoddai where the first Political Declaration of Independence was made under the leadership of a Tamil – the Hon SJV Chelvanayakam - whose father also went to Malaysia towards economic freedom. Unlike the Hon Lee Kuan Yew, no Malaysian leader promoted Tamil as an Equal National Language. Like Sinhalese politicians – Malaysian Politicians also failed to give form to their own true Identity.  The Tamil message in the above banner translates as follows:

Last week a Sinhalese group discussed the issue of National Anthem being sung only in One official language on the basis of an article ‘THE MOST BRILLIANT POLITICIAN YOU NEVER KNEW  by  Singapore-born, Miami-based writer Beverly Murray. In that tribute the author states:

‘The most brilliant politician you never knew is on his deathbed. Hooked up to a ventilator – a contraption designed to replace the most basic of human functions –  a withered 91-year old faces the inevitable. Alongside him, a nation awaits, heavy with the knowledge that for many, their world will never be quite the same. …………

However, to judge a man by his accomplishments, certainly one who has left an indelible imprint on the national psyche of an entire country, one needs to really delve into  the flavors, the rhythms, the rojak of Singapore life. Which is to say – one needs to go back. Back to when Lee was in his prime and brimming with vitality, back to when Singapore was on the brink of taking the world stage, back before Marina Bay Sands or the Singapore Flyer dominated the landscape. Back to when I was in Primary 1. Sitting cross-legged on the floor with other squirming 7 year olds, while a music teacher patiently sounded out the notes to our very first lesson in productivity:

We sang this all the way home. It was an ethos that underpinned our collective spirit, echoing well into our later years. There were no A’s for effort in Lee’s Singapore. Instead, there was his institutionalized demand, pure and strikingly simple – for the best. Not your best, which was entirely subjective, and easily dismantled by the accomplishments of another. But the best. The kind that was unequivocable’.
The beauty of Singapore is in its national activity of employment. One who realized nationalism through employment would invoke that in others. When those others are beyond country borders – we form Commonwealth. In this instance Father of Singapore recognized the value of Tamils’ contribution through employment and recognized it through the official structure. By doing so – the Hon Lee Kuan Yew gave birth to the Tamil Commonwealth of Nations.

We could be driven by our personal Truth and/or our investment in Policy.  Policies that accommodate the Truth of all major participants would lead a country towards Nationhood. It is common knowledge that Mr. Lee  Kuan Yew worked very hard and did not lead a life of luxury.  This must have helped him realize economic freedom. Once we realize one kind of freedom – we enjoy freedom of all shapes and forms. We do so because we go into the world of Truth. Those villagers in India’s Tamil Nadu actually recognized this through their own economic freedom enjoyed due to Singapore’s founding father who made them his family by including them at National level through National Status.

Every Head of Government who  honestly works for her/his benefits – would thus contribute to development of National values. The Hon Lee Kuan Yew did so in Policy/Law – and the Indian villagers did so in Experience – demonstrating great Human culture.

In terms of Sri Lanka where Tamil was made  National language through the 1978 Constitution, there is still demands that  the National Anthem being sung in Sinhala only. I responded as follows in this regard:

‘One can follow the Truth or one can follow a system – in this instance the system of Common Law. If our personal Truth is given  form and it does not  facilitate others to express their Truth it is more beneficial to US to follow the Common Law.   To enforce through the law the singing of National Anthem in a particular language only – is like the State taking over children because the mothers are not of the Government’s culture – as happened here in Australia in the case of Aborigines.   A country needs law. A nation is driven by Truth – which anyone is free to express as per God’s system.  One who interferes with such natural rights and hurts another – gets into God’s system and is punished by acts of Nature.’

Sinhalese demanding that the National Anthem be sung only in Sinhalese are disrespectful of the Constitution. Tamils failing to recognize their Equal status are doing likewise. Neither group in the Diaspora would have facilitated their folks back in  Sri Lanka’s villages to feel economic self-sufficiency. It is far healthier for countries like Australia to have economic migrants with close family ties in the villages of Sri Lanka – than to have war-affected migrants who have forgotten their families back in the villages. Lee Kuan Yew is in heaven.
Posted by Austms at 12:42