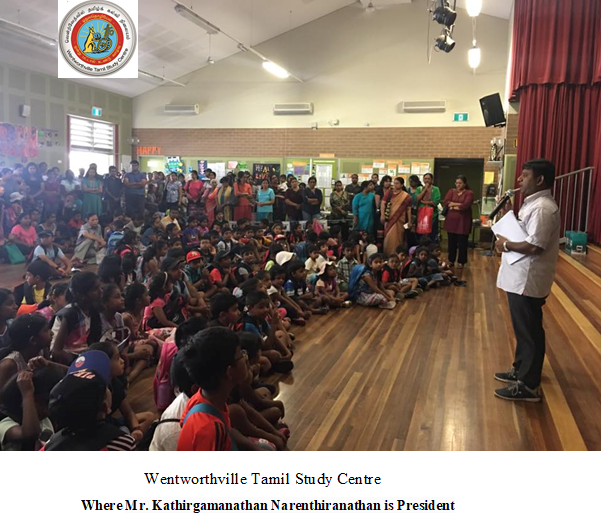 Someone who has invested in Transnational Government of Tamil Eelam (TGTE) forwarded the report under the heading  - P.M.  V. Rudrakumaran’s public challenge to Sumathiran!! What is the respons? - published at https://www.einnews.com/pr_news/427879452/.

Around the same time, I received another local report about Australian Tamil  Mr. Kathirgamanathan Narenthiranathan who is reported to have nominated himself to the position of President of Wentworthville Study Centre and is reported to have switched places with the Teacher who is reported to have received 13 votes relative to his 9 votes, to become the principal of the senior school. Amongst the allegations is the serious allegation of issuing certificates of 100% attendance in relation students who did not actually attend 100%. This reminded me of an NGO executive in Nallur – Jaffna – asking for my signature in certificates relating to their English course. I realised through the process that there were more than the numbers who actually attended the training. The realisation came when the lights went off at that point. The place was our Thunaivi Sri Lanka, cottage veranda  directly opposite the altar of our temple, where I have had many similar indicators which to me are messages from Above. I have severed all connections with this lady – thanks to that Blessing from above.  They are all Governance messages which need no explanations.

To me it was no coincidence that the above mentioned  two reports came to me at about the same time. They confirm the struggles that we Tamils as a community face from within, towards confirming our Independent identity. Every person / group which is able to claim without inner anxiety that s/he/ the group is self-governing contributes to Self-Governance of every place that is her/his/the group’s home. That is true Governance power which naturally consolidates the ownership power of others to whom also that place is ‘home’.

One group is there for the other during the latter’s time of true need – as  Indian, Malaysian and Singaporean Tamils led the support of world Tamils to openly support  Sri Lankan Tamils in 2009 when our dignity as Sri Lankan Tamils was imprisoned by the Sri Lankan Government, under the excuse of eliminating Terrorism.

Taken as a Tamil Nation, Australian Tamils are an autonomous group Equal and parallel to  Sri Lankan Tamil Community that Mr Sumanthiran is a part of and to American Tamil community that  Mr Rudrakumaran is a part of.  Like Mr. Narendranathan of Wentworthville, mentioned above,  Mr Rudrakumaran was selective in choosing his population. I was informed of the election process but later was not sent the voting forms. In Australia, the groups that consider me to be part of themselves – continue to include me in various activities that operationalize the hypothesis that we Tamils are a global nation. Not so, the American group TGTE nor the Sri Lankan Political group whose partnership includes Mr Sumanthiran. But from time to time various groups that through their apparent makeup are non-political do seek my services one way or the other – the latest one being the University of Jaffna in whose Governance power I had already invested.

It was through this assignment that I learnt the beauty of the mind/s  that crafted the Universities Act No. 16 of 1978  which includes the solution to the Tamil Eelam problem that we are all grappling with.

Section 45 of this Act provides as follows:

(a)           Section 45 of the Universities Act Universities Act No. 16 of 1978  :
45. (1) Subject to the provisions of this Act, the Council shall exercise the powers and perform and discharge the duties and functions conferred or imposed on, or assigned to, the University.
(2) Without prejudice to the generality of the powers conferred upon it by subsection (1), the Council shall exercise, perform and discharge the following powers, duties and functions:-
(xii) to appoint persons to, and to suspend, dismiss or otherwise punish persons in the employment of, the University:
Provided that, except in the case of Officers and teachers, these powers may be delegated to the Vice-Chancellor;
That to me was ‘catch 22’ for Universities which effectively says ‘you are an Administrator but the moment you have to discipline a person parallel to  yourself – with the responsibility to uphold Intellectual Independence  - you are no longer an Administrator’. This means that the Vice Chancellor can only vote from then on and not Administer. Anyone who Administers a true governor invokes the power of other governors of that place / institution and loses their fundamental rights to the extent of their Administration.

The parallel in Parliament is that law-makers who Administer fellow law makers or citizens who govern through practice of law and/or faith lose their own fundamental rights to the extent of their Administration.

In the case of teachers and most senior officers of the University – they are all custodians of Governance powers by their fields of speciality  and hence are beyond Administration. They could only be voted out at that level. The outcomes produced by them could be verified by the Governors in the Council through identity – as in multiple choice questions. The first answer that you identify with is the true answer for you. It’s like seeing in the mirror your investment in that subject matter. There is no logic needed to identify with that answer,  for it is your participation marks. It may not get you the grade at the exam but it will preserve your independence value and motivate you from within to invest more in that subject matter through direct intellectual pursuit and/or by genuinely respecting those who are already experts in that subject-matter.

At the University of NSW where I operationalized the hypothesis that  ‘first generation migrants from the East holding positions that are less than their real value  in the Australian University structure at the current time, would become equal owners as the Vice Chancellor of Western culture who is yet to complete his duty as per his stated mandate.’  Now I realise that it was this Governance power to which I gave form despite the threats and difficulties I faced – that brought me the express support of Sir Anthony Mason with wisdom in law and Dr. John Yu  - with wisdom in Public Administration,  who were both Chancellors with Governance Powers and no direct Administrative powers at the University of NSW. They were true custodians of Intellectual Independence in their respective fields. Intuitively recognizing this through the Chancellors’ responses - I asked the Vice Chancellor who did eventually meet with me for about half an hour, for surface listening,  after he discussed his eye problem with the Director of Human Resources at that short meeting,  to escalate the matter to the Council level.  The Vice Chancellor did not respond and I operationalized this non-violent, non-cooperation through Peaceful assembly in an area allocated to those who waited to see the Vice Chancellor. This was also an expression of my claim that the reason was racial discrimination which is unlawful in Australia, confirmed through the Police who arrested me and listed me as Sri Lankan. Had I been violent – physically and/or mentally, I would have lost power as a Governor.

Back then, I did not know how to explain to White Australians who stated that this would have happened to them also if they had done as I did. It would not have because if they had done the work I did at the standard I did,  they would have been promoted to the highest level in their field within that institution or they would have left that University to join another institution for more pay and/or higher position. So now I know that it was my non-violent non-cooperation that confirmed my ownership / governance power at the University. If I had reacted to hurt any part of the University – I would have hurt myself and confirmed that I was NOT a Governor yet.  The Australian Government then led by Mr John Howard failed to participate in the Court process. To my mind,  my continued pain eventually internalized by my acceptance of reality beyond my control, contributed strongly  to Mr Howard losing his seat in Parliament through migrant vote. Different groups of Governors would attribute different reasons for the fall/the dismissal. If they are true Governors –  who travel to the ultimate destination of their pathway without disturbing another’s rights, all would merge at the destination  of Common Ownership of Australia.

After the first arrest under the influence of the University Administrators, I sought the blessings of  the architects of the INCLOSED LANDS PROTECTION ACT 1901 and  released myself from Trespass charges unlawfully used by the Police, under the influence of the University Administrators. When a person is unlawfully punished, the right to give form as to ‘why’ belongs to the victim until proven otherwise through external measures. The reason I attributed  - ‘Racial Discrimination’ – is yet to be proven false and hence holds  good as a heritage value to all seekers using the bottom-up pathway.
I naturally invoked the ancestors of this State and through such faith I invoked also the power of the ancestors of the Land on which the University of NSW stands. The University of the Sunshine Coast explains the way we now more actively attribute to our elders of this land- ‘Cultural practice is to acknowledge traditional custodianship of the land at the commencement of functions, meetings and presentations of government departments and various organisations. This acknowledgement pays respect to the traditional custodians, ancestors and continuing cultural, spiritual and religious practices of Aboriginal and Torres Strait Islander people. Further, it provides an increasing awareness and recognition of Australia’s Indigenous peoples and cultures.’

The Police merely used the name of the INCLOSED LANDS PROTECTION ACT 1901 to suit the decision they had already made, despite being informed by me logically  that it did not apply in my case. I, the victim, paid my respects to the makers of that law to whom also that Land was ‘Home’.  I was able to so invoke, due to my Hindu culture which seeks the blessings of Elders and Nature at the beginning of an activity. I thus became part of that group of owners and all those who punished me were naturally demoted from their then existing positions.

In the above two examples of those of Sri Lankan Tamil origin, Mr. V. Rudrakumaran as per his own declarations through  TGTE mandate represents the militant groups that openly opposed and murdered politicians associated with the intellectual pathway to declaring our independence which culminated in the Vaddukoddai Resolution of 1976 which was confirmed by Parliamentary Elections in 1977 when Tamils became the Equal Opposition in National Parliament not due to separation of Land but due to the  failure of Administrators to practice the Doctrine of Separation of Powers with others who govern Sri Lanka through completion of their cultural pathway without interfering with other’s pathways.

Militants who acted to attack instead of defending, diluted their own governance powers at the community level. Their ways apply to those within the Sri Lankan Army who acted as individuals. But militants who went outside these borders to attack including Tamils – have proven to be lowest level participants in self-governance. By killing the architects of the Vaddukoddai Resolution, the LTTE whose heritage the TGTE is carrying forward, disowned the investment made by Tamils through the non-violent pathways of Politics and Intellectual Administration.

Mr. Kathirgamanathan Narenthiranathan mentioned above has proven by his pathway that he is also a descendent of this group and brings shame to Nallur where I understand he was groomed and Vaddukoddai  where he married.

They are both negative forces that lead to  manifestations against self-governance in the areas that have accommodated them.
Posted by Austms at 13:53