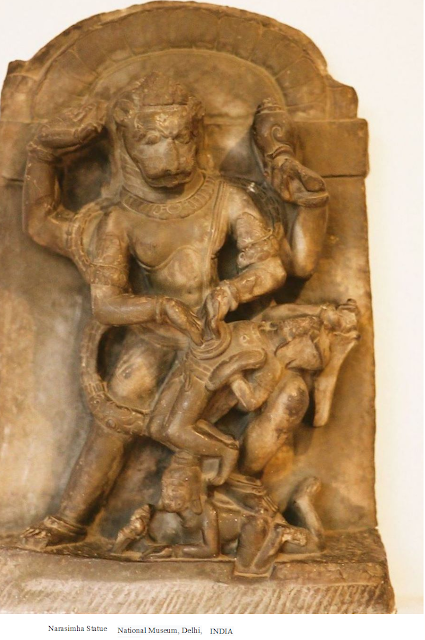 From time to time, when the vaccine rollout did not happen as promised, despite me completing my duty as a citizen – I wondered whether the King-virus was indeed an Avatar. As per my belief  as a Hindu – Lord Vishnu took Narasimma (Nara=man; Simma=Lion) Avatar to eliminate Asura (brawn driven) King Hiranyakasippu who claimed he was god and tried to force his son Prahalathan to worship him instead of worshipping Vishnu. Hiranyakasippu had the boon of exemption from death in sky,on land, in sacred area, in the underworld by any weapon, by man, god, asura or animal. Hence the combination by Vishnu in man-animal form. Narasimman appeared when young Prahalathan was challenged by his father to ‘show’ the Omnipresent Vishnu in the pillar. Prahalathan  invoked and Vishnu came.  The form was ferocious due to the Lion half. The above picture confirms that the other requirements were also satisfied. Lion is the king of animals. The Corona virus is the King of viruses.

Just because Corona takes lives, it does not mean that it is an evil virus. My thoughts led me to identifying with the following declaration by Dr S.B.Asoka Dissanayake:

[I welcome the Coronavirus the equaliser of human religious civilizations and its eventual destiny.]

If the Virus is an Asuran then we need a young (not necessarily by age) person with unshakable belief in Omnipresent Divinity / Positive Energy – to invoke that Energy. Such a virus would seem ferocious by effect but would eliminate those rulers driven by immediate benefits in Politics than by Governance in their areas of leadership. This includes leaders who are politicizing the vaccine. Those who invoke their own positive Energies would self-govern at the end of this – including through death.