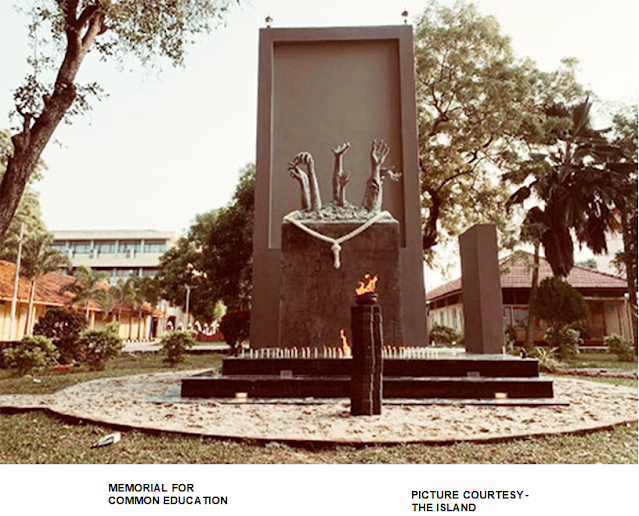 HONOURING THE HEROES OF GLOBAL EDUCATION

We Australians celebrate ANZAC day today. I thought of my uncle Ratnam Durai who was an agent in the Office of Strategic Services, during World War II. The statement about his torture (Appendix) was recorded by the officials and was preserved by my other uncle Lionel Durai who sent me the records from Myanmar, before he passed away. Strangely, yesterday we registered a call from Myanmar. When I answered – the phone got cut off. I dialled the number but no one picked up on the other side. My search said it was an advertising agency. But the timing seemed to remind me of my uncle who died in the war. This morning when participating in the ANZAC services, I remembered my uncle who joined the Allied Forces. It is highly doubtful that my uncle identified with the Government’s motive. Back then, Burma was under British rule. But by effect we know that my uncle contributed to uphold family values – so his sister would get married and maintain the independence of the wife who brings dowry as per share of the capital of the new family. My mother honoured that until her death. Now I continue to honour my uncle and by effect the value he contributed to – towards upholding the self-respect of a woman.

After the above call, I read also about the new war-memorial at University of Jaffna war Memorial  which like ANZAC would mean different types of relativity to various groups. As per the Island report :

[Undergraduates of the Jaffna University yesterday unveiled a memorial. But the Vice Chancellor of the University, who was scheduled to attend the opening was absent. The monument is in memory of those who had been killed at Mullaivaikkal in 2009 during the final days of the war between the LTTE and the security forces.]

Those who were killed included fighters from both sides. Earlier in the year, when the original memorial was demolished:

[A memorial constructed in 2019 in the university premises was declared an unauthorised construction by the University Grants Commission and Prof Satgunarasa ordered its demolition. That memorial was demolished on Jan 08. Following the demolition students began a protest.]

I opposed the protests on the basis that the monument was not in line with the core purpose of the University. The protestors have had their way and now we have the official memorial – which to me is the parallel of the excessive punishment to the officer punished over the death of George Floyd, which gave birth to the ‘Black Lives Matter’ movement. Both are strongly influenced by emotions and fail to uphold justice in which neither side gains nor loses but both sides bring their own minds to a balance.

The University of Jaffna came about due to Tamil contribution to Education as well as Politics. Education without Politics / Belief based governance is as damaging as Politics without Education in a global environment. Now that Jaffna Tamils have become a smaller minority not only in Sri Lanka but also in the region and beyond, we need to work harder to raise our standards through global laws and not global politics.

Like my uncle, Australians who fought in World Wars did so largely to defend their own family values. By following the rules of war – they raised their contribution to the highest common level of their side. If protecting the self-respect of Tamils was the goal of Tamil leaders – that happened through our politicians who were well educated and were respectful of the laws that prevailed in Sri Lanka. If the memorial was built to appease the would be rebels then the government is luring the youth for whatever reason.

STATEMENT OF CAPTAIN RAYMOND A.MALONEY OF

Q:        Do you have any information concerning the death of one RATNAM DURAI at the New Law Courts Building, Rangoon, Burma? If so, please state what you know of your own knowledge concerning the incident?

Capt. Maloney: When I was placed in the New Law Courts Building, RATNUM DURAI was already confined in a cell adjacent to the one to which I was assigned, and was moved to my cell in about 10 days. On nearly every day for several weeks after I arrived, one or more interrogators, usually the interpreters, would come to the cell and ask him questions. I understood from the questions that they were seeking information as to the radio frequencies and codes he used as an agent for the United States intelligence, where he was trained, and the names of other natives trained with him. The interrogators would frequently beat him with a heavy club or rubber hose while in the cell. At other times he would be taken from the cell and be gone for a period of from a few hours to 2 days. When he was returned to his cell his body would show evidence of very severe beating, and frequently he had been so badly mistreated that he could not walk. About half the time he was given nothing to eat and did not recover. He died in January 1944, about 6 weeks after I arrived. He had no diseases or injury, except from apparent beatings, when I first arrived.

Q: State what was told to you concerning this mistreatment and of the background of RATNUM DURAI?

Capt. Maloney: I was told that DURAI was a Hindu and a citizen of Burma, but had been trained by the United States Intelligence and dropped from a plane behind the Japanese lines in Burma as an agent; that he was captured during the latter part of November 1943 and immediately brought to the New Law Courts Building.

DURAI told me that he was always beaten when he was taken from his cell for interrogation and that on several occasions he was hung by his feet from the ceiling of the interrogation room, so that his head was barely above the floor, and that water was then poured in his nose.

Q: Can you give any information as to those responsible for the mistreatment resulting in the death of RATNUM DUARI?

Capt. Maloney: There was one Japanese interpreter who was on the case continuously and gave many of the beatings. He was about 25 years old, about 5’5” tall and could speak good English. He said he knew a little about boxing and that he was one of the few Japanese there who wore their hair long as in Western style.