On 21 March ABC reported about the city of Vo in Padua Province, under the headlines

‘Coronavirus is devastating Italy, but one town says its testing regime is containing the outbreak’ :
“Researchers from the University of Padua, along with Veneto regional officials and the Red Cross, decided to test all residents for COVID-19.” - ABC
[Vò became the center of the 2019–20 coronavirus pandemic in Veneto when two people were found positive on 21 February 2020. The next day, one of them, a 78-year-old man, died, the first coronavirus death in the country. The number of infections had also risen to 29. On 24 February an "iron-clad sanitary cordon" was created around the town and a testing program for all of its residents initiated. As of 29 February, 3% of the population was found to test positive, most of them asymptomatic. People with positive test were placed in isolation. By March 23, the spread of the disease had been stopped and no new cases could be identified. It was concluded that mass testing of people with no symptoms in conjunction with isolation of infected persons was critical to control the spread of coronavirus cases in Vò]

To my mind, a big part of the solution came from faith in Saint Anthony of Padua.  I am a believer in St Anthony and during last year’s Easter Bombing in Sri Lanka – I experienced pain as a common believer in St Anthony. Hence my reasoning for the successful prevention of the spread of Coronavirus in Vo was its Sovereignty through this common faith. In contrast Bondi became a strong spreader of Corona infections due to its ‘Tourism’ attitude which seriously dilutes the feeling of common Australian ownership. I believe that my belief in Coogee contributes strongly to prevention of the spread in this area.   Each one will find her/his own pathway to get infected or not to. If we abide by the law – and forego personal likes and pleasures – we share in the pain of the whole. If that law is common to other nations – including the UK - then we invest more strongly in Common Global values. Pain-sharing naturally develops common structure in the mind that so shares.

Now when many  individuals are blaming China for the virus, Chief of Political Section of the Chinese Embassy in Sri Lanka has written to the chairman, Wijeya Newspapers Ltd as follows: 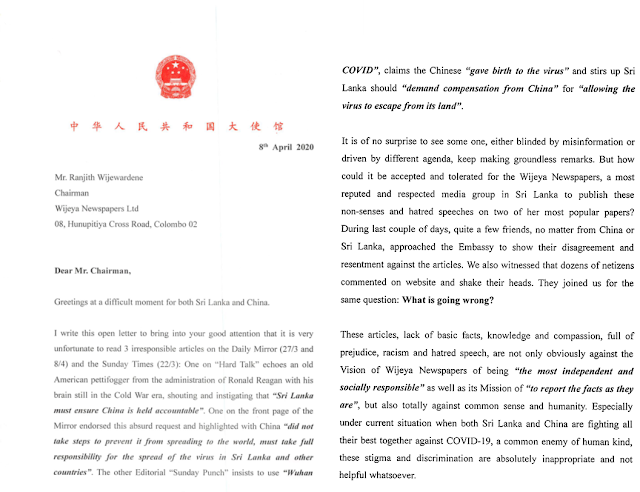 ………
All those nations that closed their borders to others limited themselves to their own Sovereignty. This includes Sri Lanka and all those who write on behalf of Sri Lanka. The above writers were therefore expressing judgments based on ‘hearsay’. Scientists would express intellectually. But in the absence one is entitled to express as per one’s own belief which is the basis of authority of any elected government.
To my mind, it is no coincidence that the above ‘experience’ by the Chinese government happened in Sri Lanka around the same period as the pain of Chinese Funded Lotus Tower is being celebrated instead of the Sinhalese-Tamil New Year during which as per current advice - the Curfew would not be lifted.
Adaderana reports under the heading ‘Lotus Tower to light up to salute those on COVID-19 front-line’:
[The Lotus Tower is set to be lit up with a special theme at 6.45 pm today (April 11).
This is to honour the selfless efforts of all medical and other essential service workers who are on the front-line of fight against COVID-19 pandemic.
The global death toll from the COVID-19 hit the grim milestone of 100,000 on Friday and over 1.6 million people have contracted the deadly virus.
A massive number of health workers and other essential service workers across the world are risking their lives in the crisis fight to save the lives of others.
Many landmarks around the world have been lit up to appreciate the tireless endeavours of the essential workers amid the pandemic outbreak.]

To the extent these countries used most recently built landmarks their claims of Sovereignty is weakened. In Australia, we did light up the Opera House to honour our Fire Fighters. One wonders about the level of faith, given that the current President took oaths at Ruwanweliseya – about which the Sunday Observer reported as follows on 26 May 2019:

The Ruwanweliseya is sited in the Ancient Sinhala capital of Anuradhapura in the North Central Province of Sri Lanka. It was built by King Dutugamunu (137 BC – 119 BC) and completed by his younger brother, King Saddhatissa, after his death. The Ruwanweliseya is ranked among the tallest ancient monuments in the world.
Legend has it that King Dutugamunu built the Stupa at a place where he found a rock inscription by Arahath Mahinda. The inscription says “In time to come a great king would establish a great stupa where the stone is established."
The Ruwanweliseya is adjacent to the Jaya Sri Maha Bodhiya in the Mahamevuna Uyana.
It was soon after the war with King Elara that King Dutugamunu started to build the great Stupa. Much money had been spent on the war and times were hard but according to the Mahavamsa the materials needed to build the Stupa miraculously sprang up from all over the island. For example, the Mahavamsa records one such incident thus: "To the westward of the capital, at the distance of five yojanas, at the Uruvelpattana, pearls of the size of “nelli” fruit, together with coral beads, rose to the shores from ocean. Some fishermen seeing these, gathering them into one heap, and taking (some of) the pearls and coral in a dish, and repairing to the king, reported the event to him”.
The Mahavamsa and the Thupavamsa state that the King obtained support from a thousand villages to build the Maha Stupa and that he insisted on paying them.]

Are we showing support to the Chinese Mr President? This gesture confirms that the Sri Lankan government is desperate for quick money. The Chinese-Lankan intuitive cooperation was confirmed by the W.H.O. chief and now this ‘artificial’ applause after natural and specific praise for the Armed Forces in relation to Coronavirus.

While I do not support anyone blaming China – I do expect appreciation for those who believe in Sri Lanka. They/we  have the capacity to cure fellow Sri Lankans. We do not know the scientific causes. But we do recognize the internal indicators that would help Sri Lankans cure themselves. The W.H.O. chief praise of  Chinese and Sri Lankan governments lacks faith. It needed scientific base of global Health Administration as per which premature and / or false praise without belief would promote complacency. In terms of transparency an observer using statistics  has the responsibility to use the completed outcome and not actively participate in the work in progress. The W.H.O.’s working body is limited to common global work. No individual has the authority to praise or criticize Separated parts of its whole.