As I read the following statement at https://edition.cnn.com/2019/05/21/asia/manus-island-suicides-scli-intl/index.html I asked myself as to whether Papua New Guinea had authority to prosecute Australian refugees:

[Attempting suicide is a crime in Papua New Guinea, and the detention centers are managed by PNG and Nauru on behalf of Australia.]

Any valid law that has the power of allocating higher status to one over another  needs to be belief based. Where there is no such common belief the law helps us to regulate ourselves and does not afford authority over another. Failure to follow this fundamental rule could lead to genuine jihads to protect one’s dignity. Those act in breach of this basic rule accumulate negative ownership karma in their own home-areas. That was how during  John Howard’s rule, Australia suffered from Bali bomb attack. To the extent the power of the voters in this issue became stronger than Mr Howard’s and his supporters, Truth intervened to weaken the fundamental values of ownership of the position held. Hence Mr Howard lost his seat. Other leaders including Mr Kevin Rudd faced strong leadership challenges due to this refugee issue.

Until proven otherwise, refugees who seek to make Australia their home through due processes have to be taken as believers in their right to refuge under UN principles. Beyond that Australians who did not get the official approval of Indigenous Australians to land here carry that negative karma to the extent they do not feel remorse. Any genuine refugee can invoke this karma. Where a genuine refugee is pushed to commit suicide the old karma would be invoked against all those who carry negative karma in terms of immigration. This could lead to attacks from the network of believers of the victims who were denied their due status despite being genuine.

I keep asking myself as to what the solution to this is – at citizens’ level. In relation to Sri Lanka which is known for exporting refugees, Economy Next reports ‘'Mother of Satan' bombs show foreign hand in Sri Lanka bombings: investigators’ while Al Jazeera reports ‘In Sri Lanka, Muslims say Sinhala neighbours turned against them’.
Finding the ‘foreign hand’ could be positive or negative to Sri Lankans. Discoveries that make us feel frustrated because we do not have influence over the perpetrators would be good for cheap politics but bad in governance. But at citizens’ level – Muslims who feel alienated need to make themselves distant relations of those who alienated them. I present this as follows in my book ‘Jaffna is my Heritage – Not Dowry’ 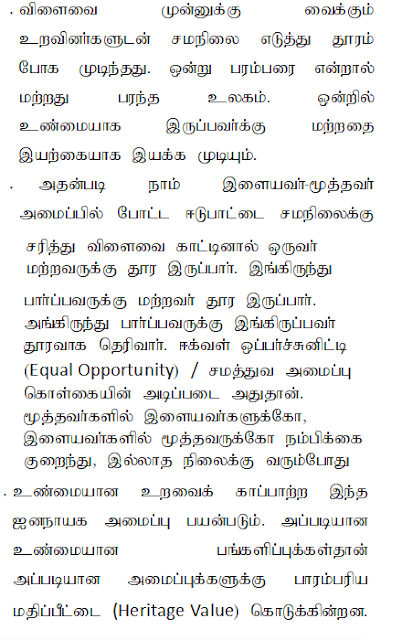 With Relatives driven by benefits and costs - I was able to take
equal position and distance myself. One is ancestral  and
the other is wider world One who is true to a system  has the power
to work the other naturally. Accordingly, when our investment in
junior-senior structure is viewed laterally – the structure would
confirm one would be a distant relation of equal status to the other and v.v.
This is the philosophy  from which Equal Opportunity principles flow.
When juniors trust seniors less and less and v.v.
and the belief tends towards zero – this democratic approach
would help preserve the actual relationship.
That is how heritage  value is preserved in such deteriorating relationships.

Like Tamils, Muslims in Sri Lanka have also been victims of Buddhist supremacy. When they found Terrorists amongst themselves and reported them to the authorities, they confirmed that they did not recognize the pain caused to Tamil civilians due to actions against the LTTE. Hence they overestimated the support that would come from such authorities who are majority Sinhalese Buddhists. Al Jazeera confirms this as follows:

[Kottaramulla, Sri Lanka - The stench of turpentine overpowered Jiffriya Ameer as she cradled her husband's head on her lap on the front porch of her home and watched the blood drain from the gaping wound on his head and neck. Her three children watched in horror as their father gasped for breath.
She screamed for help, but three police officers stood, looking on, in disbelief she said. The only vehicle which could take 49-year old Saleem Ameer to the hospital was engulfed in flames.
Minutes earlier, a Sinhalese mob had attacked Ameer with swords, fatally wounding him before pouring turpentine on his face.]
Sinhala Buddhists have certainly become distant relatives of Tamils as well as Muslims. If refugees who have not set foot in Australia feel let down – enough to commit suicide – one must expect worse from Muslims and Tamils who were let down in their home nation.

As per my premonition in 2006 this was meant to happen. The Appendix confirms this. The solution confirmed by that insight was presented as follows:

[To the extent Tamils keep criticizing the Sinhalese Government along the same vertical plane – they would not be able to establish their own independent opposition to the Sinhalese Government. Once Tamils show their independent view from the ‘other’ side (which is the international side) – on the same matter – they would lead the Sri Lankan government in the system of Democracy. Seeking separate state to rule through majority is to limit both sides to
lower level governance. This has distracted Tamils from taking the opportunity to join forces with the Judiciary in the current crisis faced by Sri Lankan leadership]

Muslims need to join forces with Democratic Global forces and not give up on their earned rights as a Diverse Community in Sri Lanka. Every diverse community is entitled to self-governance as a community.

As highlighted above,  I had the vision of  Sri Shridi Baba when I felt thoroughly dejected by the verdict delivered by Justice Sully of the Supreme Court of New South Wales.  In the dream, I was going to a place where my friend Rani Sritharan was with many women.  While I was talking to them – I noticed a Tamil child with a huge black Pottu – being chastised by a White person.  I quietly asked the child whether she had erred? The child looked blankly back at me.  Then I looked out the window and there I saw ‘farmers’ talking in Tamil.  With them stood Sri Shridi Baba.  Sri Shridi Baba did not open His mouth to speak. He just kept looking at me – and in my mind I heard the message ‘Help Muslims and Tamils’.

I had similar experience in Jaffna with Yoga Swami.  My mother reminded me of this years later.  We were standing at entrance to the residence of Doctor Pasupati – the father of Shiva Pasupati – former Attorney General of  Sri Lanka and also of my former boss Mr. Samy Pasupati.  Yoga Swami arrived and he was in a car. Swami did not get off the car – as he had hurt his hip while feeding his cow Valli.  My mother was carrying my brother – 13 years my junior. My mother lifted my baby brother Shiva up for Swami to bless my brother – the son that my father wanted very much.  As my mother recalled later – Swami kept looking past her to me – standing in a corner – as was my way before I started taking on responsibilities.  I still remember Swami’s eyes looking to me – and communicating silently with me. To me it was a Blessing from Swami – communicated in the stillness of Silence.

When I had the vision of Sri Shridi Baba in November 2006 – I had similar experience. The message was powerful.  But I still could not work out what I was supposed to do to help Muslims and Tamils.  A few days later I was invited by Mrs. Vijaya Amirthalingam - a devotee of Sai Baba to speak to their group at the Carlingford Sai Center on Ladies’ day. Below is what I wrote about this experience under the topic ‘Dissent & Opposition’ in Sri Lanka Guardian and is also published through our website http://www.austms.org/other_pdfs/EO_Dissent-n-Opposition.pdf  :

[Karthigai (Tamil November) month is the month of Muruga – the month in which Muruga was born. Muruga is the presiding Deity of Tamils. It is during this month that Karthigai Flower ( Gloriosa Lily )blooms in plenty in Jaffna. This flower is also the flower of the LTTE. I learnt about all this here in Sydney. In 2006 I was invited to speak at a Sai Center, on Ladies’ Day. I was hurting after the Supreme Court of New South Wales dismissed my complaint of unlawful racial discrimination, against the University of NSW, the State Government and the Commonwealth. I was in fact thinking of going and staying at the Yoga
Swami Aachram in Kilinochchi where my brother in law was already staying. On the morning after the verdict was delivered by the Supreme Court – I had a vision/dream in which I received the message to help Tamils and Muslims. I later realized that that was the solution to the Equal Opportunity pain and loss I was experiencing. That pain would be felt by anyone who had genuinely invested in Democracy but was continuing to live in autocratic
systems.

When the Sai Center called me to speak, I felt an intuitive comfort. I shared with the Sai devotees how I felt helped by Swami Sai Baba during this pain. I continued to go there even though that particular center is a distance away from our home. One of the senior ladies brought to me on the day of Karthigai Theepam 2006 a picture of Sai Baba – a big one to be hung on the wall. When we brought the picture home and hung the picture on the wall where
there already was a nail – I could see the lamps along the Coast of Coogee reflected through this picture. I felt that Lord Muruga Himself had come home. Later when I got to know that the son of this lady who gave me the picture, was in custody for supporting LTTE and was refused bail – I wrote to the Australian Attorney General and obtained signatures from the Tamil community in support. The President of the Human Rights Commission responded to
that communication – expressing support for my side. The LTTE supporter was granted bail during the following hearing. Eventually when this LTTE supporter was released, I was able to identify with my work also. I was able to write because I believed that I had credits with the Australian Justice system. The connection with Lord Muruga helped me use my credit in favour of the Tamil Community. I did not pause to separate the LTTE from the Tamil Community and therefore from Lord Muruga. I just shared the credits I had with the Australian system and that I believed added to the influence felt by the Australian authorities.

I do believe that when we work genuinely and independently – the powers work instantaneously. Like with God – surface readers are not able to ‘see’ the connection. Those who feel would know intuitively and share silently.

As for the Karthigai Flower - I came across this flower when I went to buy flowers for garlands for the Sai Center. It looked beautiful and I bought and took them to the Sai Center. There I learnt that it was the flow of the ‘Boys’ (LTTE) and another Indian lady said that it was the flower of Lord Muruga and it had 6 petals. It did have. I felt so very comforted feeling that Muruga was with me. Often we forget that we all have Divine powers. These powers work intuitively to balance the system of Natural Justice. To me that fact that Swami brought the message that the incident happened during Karthigai Theepam celebrations and at the University of Jaffna – meant that I could help through my credits with the University system. The form would evolve as I continue to seek.
……
.]