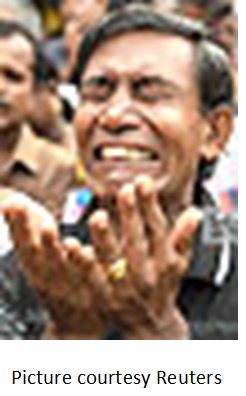 I don’t need to be a Sinhalese and/or Christian to feel the pain of these mourners. All I know is that it hurts and I feel as desperate as they do in their agony.

[“I did not want to come here,” said Gloria, one of those attending, as she wiped away tears.
“But we came to remember our daddy who left us,” added the 17-year-old, who was accompanied by her mother and 14-year-old sister, Sophia.] Reuters article headed ‘In tearful ceremony, Sri Lanka Catholics mark one month since bombings’

Just like in the Christchurch shooting, these victims were praying to the higher powers. The Christchurch Muslims were  attacked by an Australian of Christian origin. The Sri Lankan Christians were attacked by Sri Lankans of Muslim origin. The commonness in the two attackers is that they were not genuine practitioners of their religious faith. As in immigration if they carry the name without faith – and use it for selfish purposes - they curse themselves.  True believers have the ability to invoke that power against them. When victims cry as Sri Lankans all those who use the name of Sri Lanka to abuse other Sri Lankans would be cursed. Some of them were exposed during the inquiry into the Easter Sunday bombings. If they are Christians and most of them are – those who use the name of Christianity will be cursed. The global minded victims would naturally curse those who indiscriminately use global resources selfishly. One must include all of them and not just the attackers’ group in the cursed categories.

I believe that every true discovery I share expressly empowers the decision makers even though they may not have read my work. I know this because I am myself so helped when I need to make decisions. But more than that when I feel with victims as if I have had the experience, I contribute to the  universal power of oneness by which I am also empowered. As per my discovery  Separation is the cause of Sri Lanka’s unresolved problems.  Buddhist majority seeks to be senior and  also minorities who do not want to be juniors seek separation. Both are negative towards oneness. Democracy requires us to take Equal position where common belief is weak. Diversity requires us to physically stay together at the wider common level – for example in the path of law, secular work  and/or business.

Without belief based commonness we are limited to our own resources. Say as a separate person I produce 3 units and a Buddhist produces 5 units. Our inner satisfaction would be limited to 3 and 5 respectively. But if I submit my work to the Buddhist and the Buddhist accepts my work completely, together we would produce the square of 5 i.e. – 25 units. I will also feel that I have produced 25 units. Hence the saying that the value of the whole is greater than the sum of the individual parts.
Muslims in Sri Lanka when they feel the pain of Christian victims as theirs become common Sri Lankans. Where Buddhist civilians attack Muslims at this time – they separate themselves as terrorists in the making. Australian Prime Minister Scott Morrison’s attitude about lone attackers after the Burke St attack on 09 November last year (https://www.abc.net.au/news/2018-11-09/bourke-st-attacker-shot-after-car-fire-stabbings-one-dead/10483608) was revealed by the following:
[In the days after that incident, Mr Morrison described "radical, violent, extremist Islam" as the greatest threat to Australia's national security.]

The Christchurch shooting by a White Australian on 15 March 2019 confirmed that the above statement was about Australians of Christian origin and not about Muslims. The White Australian listening to the above description would have felt ‘senior’ to Muslims who as per his interpretation were ‘Terrorists’. In effect Mr Morrison’s claim which was about a man who ‘had a criminal history of cannabis use, theft and driving offences.’ In other words, if you are a Muslim criminal in Australia – you are a terrorist. Likewise,  if you are a Muslim or Tamil criminal in Sri Lanka you are a terrorist. It is often easier that way than to follow Due processes of the secular law.

To the extent the Sri Lankan government ignores the agony of victims whose civilian relatives died in the 2009 war – but instead celebrates victory – it curses itself. The Easter bombing is one such example of return karma. The leaders actions and expressions influence the minds of all those who voted them into power. When those leaders are wrong as per the common law – the victims become automatically right and v.v. When we become observers – we identify with the karmic connection.

Jesus showed us that death is not the end but to the noble, death of the physical is the ticket to true independence. We do not die but continue to live through our true heirs for better or for worse. When we come together through genuine pain sharing – we must know that the Lord has heard us and given us more loved ones through whom the dead live and support us.