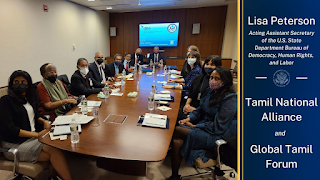 The power of One was demonstrated yet another time through my investment in Independence. This morning I was referred to the analysis at அமெரிக்காவில் சட்ட நிபுணர்குழு ஒப்புக்கொண்டதென்ன?/Kuna Kaviyalahan - YouTube . In essence, Presenter Kuna Kaviyalahan was stating that the delegation of Tamil Law experts - led by Mr M Sumanthiran were being ‘secretive’ and were accepting minority status, instead of independent national status. To those who directed me to the above, my question was :

[I think Kuna picked up the Energy sent by my article ‘DIFFERENTLY ABLED MINORITY’ two days prior to his program. Kula obviously failed to attribute credit to me]

Later when Maravanpulavu K. Sachithananthan wrote in frustration- with copy to Mr Ali Sabry -  that the TNA had deviated from the claim of Tamil Nationalism and has accepted minority status I responded as follows:

[On 17 November 2021, I highlighted Tamil Nation through my article ‘DIFFERENTLY ABLED MINORITY’ . The reference to the meeting referred to by you was published after that:

Advancing the protection and political representation of minority groups in Sri Lanka is a priority for the United States. We met with

As per the timing, I conclude that my belief automatically Opposed them – as happened in the case of Vaddukoddai Resolution followed by Equal status in 1977 elections. But only one Tamil leader expressed appreciation for my article. You also did not. Hence to you I am junior to TNA leadership. Truth takes Its own path and maintains the balance of Dharma even if the person is one person.

It is heartening to know our Energies are naturally connecting to each other to Oppose any compromise by this group. As per Sunday Times report ‘TNA team invited by US Govt. to discuss political issues’ :

A Tamil National Alliance (TNA) delegation is to visit the United States later this month to drum up support for the party’s stand on political issues.

[All these interventions were made to ensure the stability of maritime routes for Chinese vessels. This is very much in line with what is happening today, with the Chinese “Belt and Road initiative”…….

It is now clear that China is resuming its old policy as evidenced by Admiral Zheng He’s naval expeditions, and is once again engaging in expanding its military, political and commercial authority across the globe vide the Belt and Road Initiative.]

[The author of Conflict to Peace: Transition in Nepal, Brig Gen. Dr.Umesh Kumar Bhattarai, Nepal Army (Retd), who is a strategy and security analyst, tells Ceylon Today that no country would come to assist another country’s national interest and that it would be purely for political and commercial gains. He added that the QUAD considers Hambantota Port a backlog and Sri Lanka should not let China ‘use’ them in return for supplying weapons to wipe out the Tamil Tigers. He also considers that the port will be posed as civilian use for military capability in the next 96 years or so.] – Ceylon Today article ‘Will Hambantota Port Become a Chinese Military Base?’]

Is the US Administration seeking to bargain with the Tamil leaders to weaken the shift towards China?

To me it is about my participation through my Truth – to influence the outcomes to protect Tamil as well as Sri Lankan Sovereignty. If these direct participants represent a country / physical  group – mine is Energy of the group/s I feel is my ‘home’. That is true Nationalism, which when realised – leads us.