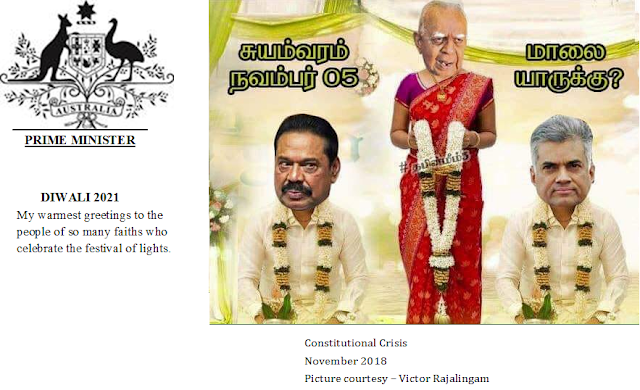 On All Souls Day, I received the message on the left from the position of the Prime Minister of Australia. Today, on Deepavali day, my nephew Arun rang to wish us and I felt happy. Later I read the thoughtful message from young Cousin Vathanee in Canada and blessed her wholeheartedly. Vathanee takes care of her parents and I appreciate that very much. Then came Nilantha Illangamuwa’s wishes with the note ‘You are an exception with all great qualities’ . To me that is a ‘merger of  minds’ . The best Deepavali wishes came from my own karma surfaced by the following in the Island article ‘Please don’t forget people who elected you, Mr. President!’ published on All Souls Day.:

[I was deeply shocked and disappointed when my eyes fell on the relevant gazette notification online within a few hours of its issuance on 27 October. ]

The Wikipedia account of the 2018 Constitutional Crisis includes the following:

[On 27 October President Sirisena issued a formal notice for Prime Minister Ranil Wickremesinghe to step down. Sirisena later issued gazettes formalising and defending the dramatic move. Wickremesinghe however entered Temple Trees, the Prime Minister’s residence, refusing to accept the appointment of Mahinda Rajapaksa and his dismissal, insisting in a letter to Sirisena that he was still in office. Sirisena and Rajapaksa announced their intent to form a new cabinet.]

It was on 04 November 2018 that I published the picture on the right. Interestingly the Island article refers to Mr Sivajilingam’s following advice:

[Speaking to the Jaffna media, Sivajilingam said that the President had earlier promised a new Constitution to safeguard the rights of every Sri Lankan.

“Everyone wants the President to come up with a new Constitution. There is pressure to address the issues faced by the Tamil people. However, the President has suddenly appointed a Task Force on One Country One Law. The task force is a joke. Appointing Ven. Galagodaatte Gnanasara Thera as the head of the task force makes it a farce,” he said.]

Back in 2018, when Mr Wigneswaran split from the TNA, Mr  Sivajilingam said that ‘the Tamil people do not want to have another party or new Chief Minister but they want to have a permanent solution to the ethnic issue.

For his part, Mr Wigeneswaran is reported to have said ‘TNA has forgotten its vision and is now working according to the whims and fancies of the government.’ – Daily News article – ‘Wiggie to form party, contest PC poll’

Taken together  - they confirm that there is no political solution to the ethnic problem. All they can do is to disturb here and there  through the English media.

But true believers would rely on the merger of Tamil, Sinhala & English minds – as was the case in 2018. When each one of us digs deep within, we will find that commonness that confirms we are Sri Lankans.