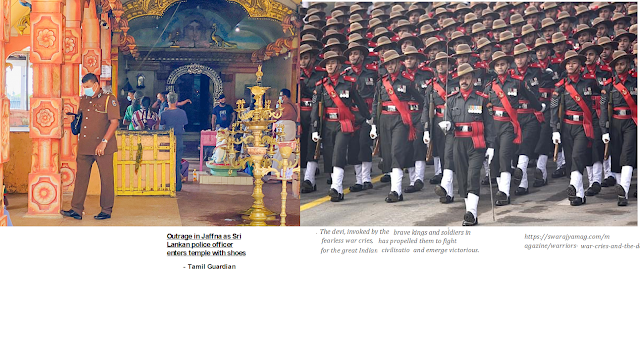 My attention was drawn to both of the above pictures around the same time. One is about religious faith and the other – of lack of faith. Amar of Swarajya referred me to the article that carries the picture on the right. I found the Tamil Guardian article headed ‘Outrage in Jaffna as Sri Lankan police officer enters temple with shoes’ with the photo on the left. As per the Tamil Guardian article:

[The officer, who was photographed with his shoes on at the Selva Sannidhi Murugan Temple in Thondaimanaru, is reportedly a senior superintendent of the Sri Lankan police in charge of the Kankesanthurai area.]

As per the Swarajya article:

[Worship of the female goddess as the primordial creative force on the Indian sub-continent is as old as the history of civilisation in the region. Terracotta figurines of the Mother Goddess found at various Indus Valley sites show that the notion of the primordial female spirit from which all creation has sprung, was popular in South Asia as early as 3000 BC. Through the vedic period, we see further development of this notion into male and female deities with specific roles in the pantheon. With time, the notion that male and female represented two sets of complementary forces, whose harmonious interaction sustains the universe, began to get codified in a wide variety of theological concepts –  ranging from the vedantic philosophical meditations on the nature of prakriti and purush to the theological depictions of Ardhanarishwara, Yama-Yami, Lingam, Yoni etc.]

The Swarajya article confirms the value placed in heritage as a motivational force. On 10 October, I highlighted as follows:

‘Minister Namal Rajapaksa together with more than 100 monks will leave in a fortnight on a special flight provided by the Indian government for Kushinagar, where the Buddha passed away and an important pilgrimage site for the opening of a new international airport…….’

The question is the relative value of Kushinagar in India to Selva Sannidhi Murugan Temple in Northern Sri Lanka. To me, Selva Sannidhi Murugan temple is sacred due to our family experiences there. Removing footwear outside the temple is a tradition that Hindus have followed . During the war years – once when some soldiers walked with their boots on through our temple to the other side, I advised them not to do so. Each time a civilian has to so advise, the apparent status of the Officers would go down. Lord Murugan – referred to as Kataragama deity by Sinhalese is known as a war-deity. It is highly unlikely that anyone in the Indian army would walk through a Hindu temple with their boots on.

These are practices that carry heritage value. The value of heritage is the uniting Energy in the heritage. When we are disrespectful of such values – we tend to be scatter and become disorderly.

Reference is made to ‘the theological depictions of Ardhanarishwara, Yama-Yami, Lingam, Yoni etc.’ in the Swarajya article. They are different pathways through which man mates woman. They are all built into Hinduism – so there is respect through which sexual pleasures are regulated and are elevated as happiness. Had there been respect for women – the Sinhalese soldiers would not have raped women prisoners during the war, and earned the curse of good mothers. The shoes confirm why separation of powers are essential in Sri Lankan governance. The soldiers who raped would produce and groom disorderly heirs. Others who have different faiths are entitled to be free of the negative karma of these soldiers against motherhood.