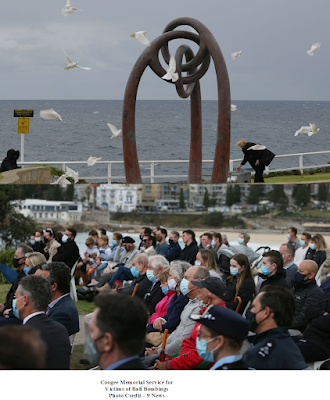 Today is the 19th Anniversary of Bali Bombings about which 9 News reports as follows:

[A memorial service has been held at Coogee, in Sydney's eastern suburbs to mark 19 years since the deadly 2002 attacks in the tourist district of Kuta, on the Indonesian island of Bali.

Over 200 people were killed in the Bali Bombings including 88 Australians, 20 of which were from the eastern suburbs, including six members of the Coogee Dolphins Rugby League club.

I did not need an invitation. That Memorial on Coogee Beach is my resting point during regular walks. As I do with family, I paid my respects through prayers.  I removed my shoes and paid my respects to all victims. I prayed to Hindu Bali, to prevent such pain in the future.

I was conscious of LTTE as well as the Easter Bombers who also caused similar pain.

In my yesterday’s article, I included the following:

A member of the Tamil Diaspora responded as follows:

[It is the most horrendous death. Much,much worse than self immolation,by other means. Slow excruciating death

To this end Thileepan must be worshipped by the Tamils, who are proud of their heritage ,as a god. I do ]

My response to this was:

[You seem to endorse suicide bombings also. Thileepan was in the armed forces.  I lived with them for a month through my UNDP project. . The girls had better living conditions than at home. As per insiders Thileepan was already injured. It was not an independent decision. If you felt so strongly – why did you not write publicly? Better still why did you not go over there and help them in 2002-2003 when ceasefire was declared? Also – in 2009 they kept many as human shields. It’s hard to know whether they made independent decisions.

I appreciate those who made their own decisions. Fasting is difficult and I can project on that basis as to how painful fasting to death would be. Gandhi was an example. To my mind, not Thileepan. I doubt that Thileepan had a choice. Thileepan earned the right to be celebrated by his group - as a hero. Not a martyr. There is a huge difference between the two]

There was, in my mind, the knowledge through the Hindu article headed ‘China’s presence in Sri Lanka raises concerns’ which presents the following picture:

[The Sri Lankan Tamil diaspora, including some former cadre of the defunct Liberation Tigers of Tamil Eelam (LTTE), are “seriously concerned” over the large-scale and long-term investments by the Chinese Government in Sri Lanka, Indian intelligence agencies have said.

Noting that “inaction” on the part of the Government of India had paved the way for China to gain prominence in Sri Lanka, the conclave decided to take all out efforts to establish contact with the Chinese Government to create a political and economic base for Sri Lankan Tamils.

“They assume that the Chinese will welcome such initiatives as it would assist them in northern Sri Lanka to have a hassle-free presence, besides facilitate them in their stance against India,” the note on security preparedness said, adding that the Sri Lankan Tamil diaspora was deploying its global resources to tap Chinese intellectuals to gain a groundswell of opinion favouring their efforts. However, the conclave had strong dissenters to the strategy as they believed that the Sri Lankan Tamils would lose the support of the Indian Tamils.

Adding to the Central inputs, Tamil Nadu Director-General of Police (DGP) C. Sylendra Babu wrote to the Commissioners/Superintendents of Police (SPs) on reliable information about the LTTE remnants regrouping and holding meetings near Thiruvanmiyur in Chennai “very often”. The alert was given days before the National Investigation Agency (NIA) arrested former LTTE intelligence operative Satkunam, alias Sabesa, 47, on charges of indulging in drug trafficking with international links and also funding the revival of the defunct organisation in Sri Lanka. Materials seized from his premises in Valasaravakkam, Iyyappathangal, etc., revealed evidence of a huge transfer of money to his contacts in Sri Lanka, investigators said.

At the meetings held in Chennai, the participants chalked out strategies for further course of action in the backdrop of the developments relating to the increasing presence of Chinese defence personnel in Sri Lanka. Since the Chinese presence in the neighbourhood could pose a threat to India, the DGP called for enhanced surveillance along the coastal districts.

The State intelligence, relying on the Central agency inputs, said some radicalised Muslims were brought from Pakistan and Turkey by senior Sri Lankan political leaders and made to settle in Batticaloa, Mutur and Kalpatti. They had started madrasas to spread their ideology in eastern Sri Lanka and had planned to infiltrate into India, police sources told The Hindu on Sunday.]

I was concerned about the pull towards China, when a Hindu Tamil leader wrote to me objecting to my claim that Buddhism came to Sri Lanka from India. This person claimed that it came from China. Both could be true. But then – that angle from this guy kept worrying me. Now the above report confirms that my concerns were authentic.

In the meantime, Sri Lankan newspaper -  the Island reports under the heading ‘Indian FM’s visit has jolted govt. into action – Sumanthiran’:

Participating in a talk show on a private television channel close to the Rajapaksa government on the 18 September Gnanasara Thero said tht “There is a possibility of another extremist attack like the Easter attack at any time. Weapons are ready to be detonated at any time. Information and evidence about the attack has been provided to the government.”]

It looks as if Tamils of North have invoked war heroes under the pretext of Memorials. One can fool oneself. But no one can fool Truth. Let us start praying for those who Opposed war – including through objections to memorials outside their territory. All nations that promoted this will be held accountable if there is another war that robs Tamils of their true heirs – the educated Tamil who sacrifices the body for Common Intelligence and is blessed by Mother Saraswathi.