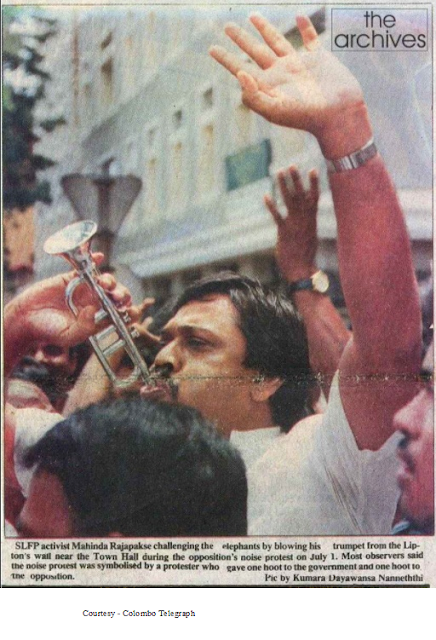 I thought of Dr Jayampathy Wickramaratne’s widely published article ‘The Right To Noisy Protest’. In his article Dr Wickramaratne quotes as follows:

[‘Stifling the peaceful expression of legitimate dissent today can only result, inexorably, in the catastrophic explosion of violence some other day.’ Justice Mark Fernando in Amaratunga vs Sirimal.]

My mind however took me to the common person’s version published by Asian Mirror on 01 August 2016 – under the heading ‘Pada Yatra Protesters Hoot At SLFP Headquarters: MR Looks Other Way’:

They dubbed the party headquarters as "Sirisena's Appa kadey" and chanted slogans against the President as they approached the party office.

Former President Mahinda Rajapaksa, a Patron of the SLFP, led the march when they walked past the party headquarters.

Rajapaksa, however, did not make any effort to control the situation although he holds a senior position in the party. However, the protesters did not cause any damage to the building or the properties of the party headquarters.

The majority of protesters who booed at the SLFP headquarters were members of the party.]

Two months after this was born the Sri Lanka People’s Party (SLPP).

A few days after the above March Cricketmachan.com reported as follows:

[SATIRE: MR ACCUSES THE AUSTRALIANS OF PLAGIARIZING HIS PADAYATRA CONCEPT

The Padayatra commenced yesterday from the middle of the pitch of the Galle International Cricket Stadium and ended in the visitor’s dressing room this morning. “The Padayatra has been a success. Our team showed immense commitment to our peaceful protest in support of the best spinner ever,” said an ebullient Darren Lehman.

Such was the corrosive impact of Sri Lanka Cricket’s rash decision to demean Murali on the Australian players, that at once stage three batsmen marched one after the other in quick succession from the pitch that they were almost walking in lockstep as they approached the dressing room.]

Mahinda’s Pada Yatra? That was how Hindu Kathirgamam  is/was occupied by Buddhists despite the constitutional requirement to be Buddhists foremost. I learnt about the Pada Yatra heritage through Yoga Swami devotees. The call to serve Tsunami victims came through my belief in Yoga Swami. Patrick Harrigan wrote as follows in this regard, in 2005:

[You will immediately notice the professional approach that Gaja and Julia have brought to our work in Mankerny, which hitherto had consisted of my occasional visits, including 18 annual pada yatra foot pilgrimages through Mankerny, whose poverty never prevented the Mankerny folks from feeding the multitude of pilgrims on their long trek to Kataragama. Gaja’s style also tells you something about her motivation in wishing to serve the poorest devotees of the inscrutable god of Kataragama, Lord Skanda-Murugan’]

As per my interpretation, the Pada Yatra represents Divine brother – Muruga who renounced the autocratic pathway to become democratic from zero base. This happened after his elder brother Ganesh was awarded the prize mango for going around His parents – as if they were the whole world.

If therefore a believing Lankan protests against Chinese autocracy, Lord Muruga of Kathirgamam would manifest Himself to make Sri Lanka global. The election results in Tamil Nadu where Mr Stalin who said that India ought to vote against Sri Lankan government in the recent UNHRC Resolution is a strong indicator of this.

The following report by ‘The Morning’ confirms that the President is separated from Tamils:

This month serves to commemorate the brave war heroes who sacrificed their lives for a free and independent country by putting an end to the terrorism that ravaged the nation for more than three decades.

The War Heroes Commemoration Month commences in the first week of May from the day the National War Heroes Flag was pinned on the President.

Whether we like it or not – Muruga is an inalienable part of Sri Lanka and will manifest Himself whenever there is a need for democratic leadership by a true believer in Democracy. If Politicians seek to be autocratic – then they have to go to Sella Kathirgamam dedicated to Lord Ganesh. The two should not be mixed indiscriminately. In Sri Lanka, Buddhist politicians who went to Kathirgamam were granted the boon of democracy. Hence when they went Tamils got the opportunity to go global while Sinhalese are becoming more and more local in their standards.