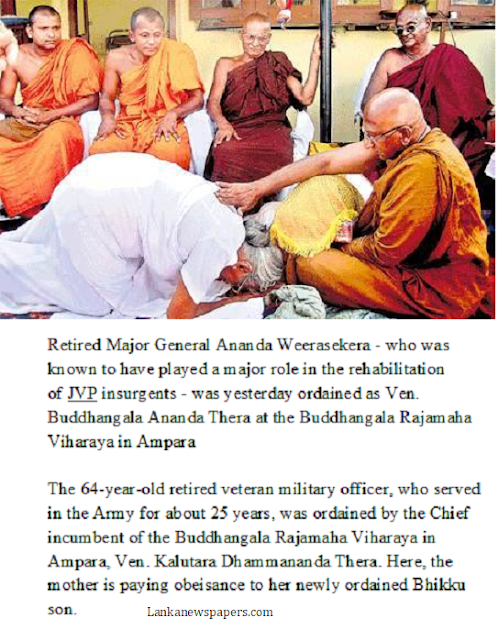 NO BURQA; YES BUDDHIST ROBE FOR MY ARMY BROTHER

NDTV reports under the headlines ‘Burqa "Sign Of Extremism, We Will Definitely Ban It": Sri Lanka Minister:

[Minister for public security Sarath Weerasekera told a news conference he had signed a paper on Friday for cabinet approval to ban the full face covering worn by some Muslim women on "national security" grounds.

"In our early days Muslim women and girls never wore the burqa," he said. "It is a sign of religious extremism that came about recently. We are definitely going to ban it."]

Is that to protect or to show Political power without true need?  A search of the driving force of the proposal – in this instance Minister for public security Sarath Weerasekera – would indicate to a genuine seeker – the connection between the said manifestation (effect) and the cause in a ‘free’ environment. Sri Lanka has been made a ‘free’ environment to Buddhists. The globally free mind has published the following details about  the brother of Minister for public security Sarath Weerasekera:

Major General Ananda Weerasekara was the Commanding Officer of the North Central Province.

Ananda was educated at Nalanda College Colombo. While at school he Captained Nalanda soccer team with distinction and was the goalkeeper. He was also a member of the college Cadet platoon.

On 1 May 2007, he entered the Buddhist Order by the name of Buddangala Ananda. Currently he is living in the Buddhangala Forest Hermitage, in Ampara district.]

Minister for public security Sarath Weerasekera’s elder brother was 64 years old when he joined the Buddhist Order. That is the parallel of post war Diplomatic Postings for Army leaders.

The depth of religion based discrimination is confirmed by the shrinking space in which minorities can operate. In the early days of Buddhism in Sri Lanka – followers in Sri Lanka were influenced by the mind of Emperor Ashoka who converted to Buddhism after becoming an emperor through invasions and takeovers after armed wars. Wikipedia presents the following about this Buddhist pioneer:

[The Mahavamsa also briefly alludes to Ashoka's cruelty, stating that Ashoka was earlier called Chandashoka because of his evil deeds, but came to be called Dharmashoka because of his pious acts after his conversion to Buddhism. However, unlike the north Indian tradition, the Sri Lankan texts do not mention any specific evil deeds performed by Ashoka, except his killing of 99 of his brothers.]

Army Generals becoming Buddhist monks is in the genes heirs of Ashoka. When  Minister for public security Sarath Weerasekera’s brother became Buddhist monk he confirmed that about Buddhism in Sri Lanka carried the war experience as genes. It is therefore logical to conclude that Chandaweera would one day become Buddhaweera in time to come and that he would kill his own fellow citizens in the process of realising the evils of war.

The Burqa ban is part of that killing by Chandaweera. Wikipedia’s following report confirms this:

[In 2002, when the government signed the peace accord with LTTE, he was the Commander Northern Naval Area . The LTTE was given full freedom to enter any Army, Navy camp but Admiral Weerasekera never allowed LTTE to enter Mandativu island which was a very important military strategic location. He also never allowed LTTE to come in wearing the cyanide capsule and he was categorized and warned by the government as " anti peace element" in the peace process. In 2003 when he was the Commander Eastern Naval Area, during the " Peace Accord" , the LTTE vehemently protested to the placing of a Buddha statute in Trincomalee town on Vesak day by the Sinhalese. The terrorists brought the entire town to a standstill by forcibly closing all shops, fuel stations, public transport and tried to destroy the Buddha statue by throwing grenades. When the police and the Army were under orders not to interfere as it was peace time, on the third day Rear Admiral Weerasekera, on his own initiative, took charge of the situation, proceeded to the town with naval troops, guarded the Buddha statue and brought back the town to normal. Within two days, at the demand of the LTTE, the then President Chandrika Bandaranaike removed him from the Eastern Naval Commander appointment, and brought him to Colombo. However, after few days, a new post was created at NHQ as Deputy Chief of Staff and posted appointed him in it.]

The three islands targeted by Chinese in Northern Sri Lanka are -  Nainativu, Delft or Neduntheevu, and Analaitivu. All three are close to Mandtivu where Admiral Weerasekera overruled the Ceasefire agreement as presented above. I made my own contribution to that Peace through a UNDP project. This renders me deeper insight into the minds of those who ‘blocked’ peace. The question is whether Mr  Weerasekera who is anti LTTE is seeing Muslims as an extension of the LTTE and hence the Burqa Ban proposal?