Thank you for your invitation to provide feedback including on ‘Community misconceptions’ and “Instances of misinformation or scams targeting my community”.  I attach copy of a letter from Dr Harold Gunatillake ; 20/499-505 President Ave: Sutherland NSW 2232 .

The letter is addressed to the Hon. Dr. Hugh McDermott MP for Prospect. The subject matter is stated as ‘ Your talk delivered at the Tamil Congress’.

Originally, I received this letter on 26 May and was headed ‘Mullaitivu massacre’. That communication was to a forum which is more or less neutral in this issue. They discuss ‘general’ topics as ‘general Sri Lankans’. Today’s email came to me through the Global Tamil Diaspora.

Dr Gunatilleke states in his letter to an elected leader [  LTTE terrorist movement headed by Prabhakaran was banned and condemned by all governments of the world, as a ruthless killing group to create their own State called “EELAM”]
As per my knowledge, this is not factually correct. Even if it were talking about them now is disrespectful of all soldiers who died in combat. Such expressions could be abused by others who are looking to reinvoke the war.  The parallel of this is a publication about me as an LTTE Agent. - https://ltteagents.wordpress.com/2012/03/01/p/

My picture of LTTE leader is not one formed by direct interaction or part of the LTTE structure. I got to know many in that structure during ceasefire time – through a UNDP project. I had the duty not to ‘judge’ either side but share my wisdom in Public Administration that would suit Tamils of North-Eastern Sri Lanka. I continue to provide this service through Australian Tamil Management Service. I actively promote self-governance at the level of the local structure of the person/group. As per the individuals who believed in the LTTE – they did consider their leader to be a ‘Freedom Fighter’ . To my mind, no one has the right to mark it right or wrong publicly, unless  they have been personally affected one way or the other. Belief alone renders us Universal franchise to express our judgments.
My work to reconcile and develop fellow Australians of Sri Lankan origin is therefore seriously damaged not only by the above source abusing media power but also Dr Gunatilleke’s intent of separation as indicated. The picture below taken from  Dr Gunatilleke’s letter shows Separation and not unity: 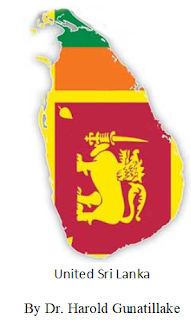 Dr Gunatilleke highlights as follows from the speech by Hon. Dr. Hugh McDermott:
[Today, May 18th is the 11th anniversary of the Mullivaikal Massacre. Part of the Genocide that targeted the Tamil Community in Sri Lanka and resulted in the deaths of 160,000 innocent, unarmed men, women, and children. Many were murdered because of their culture, faith, language, and traditions. The Sri Lankan Government must acknowledge and accept responsibility for this Genocide. ]

The above expressions are valid by someone who by belief is connected to victims who believe that they were specially targeted and are not aware of any law in their environment through which they can mark themselves ‘wrong’. In democracy this belief based marking of rights and wrongs are expressed  by the elected candidate. Such expressions are beyond Public criticism by others. If it were believed to be unlawful by a fellow Australian, then such action needs to be taken through Due Processes as per the powers of relevant authorities in whom those powers have been lawfully vested.

At the primary level, we tend to use ‘likes’ and ‘dislikes’ as our measures of judgment. At secondary level, we use rights and wrongs as per common intellectual measures. At tertiary levels we identify with and are empowered by the truth WE discovered.
Tamil victims of war empower Australian politicians to escalate issues to global level.  That was how the UN Resolution against the Sri Lankan government happened. Sinhalese Sri Lankans had equal opportunity to share their pain with Australian politicians who represented them. That is true Democratic politics which eventually will contribute to laws that would prevent divisions and separations.

Like in the case of Covid19 – we have to work from the effects backwards to find the cause. Where there is no independent evidence the path to the root-cause is led by belief. The solutions would work for the believers who continued to seek a solution for themselves and their heirs.

Dr Gunatilleke states ‘ You are blindly sympathetic to this defunct terrorist movement, rousing again and joining the second generation of Tamils in Australia who fled from the country to escape from the ruthless killer, killing innocent civilians, including Tamils, and you should be embarrassed yourself for joining such a group.’

This confirms the current government’s claim that they ‘liberated’ Tamils from the LTTE. LTTE did kill Tamil politicians – the same way the current Sri Lankan government is imprisoning its political opposition through their power over the armed forces. That is the language of enforcement at that level. But Tamil civilians are the authority to proclaim that the Government liberated them from the LTTE. If they so proclaim – they are making orphans of the hundreds of thousands who died, were injured and continue to suffer trauma due to the war. To the extent the government lacked the power to control them the government failed in its duty to facilitate a secure environment. The test was in Colombo where LTTE had no direct power. All the ethnic riots that happened in Colombo where minorities were not protected by the government – empowered the LTTE through belief based network – which like the Covid19 infection is exponential in power. Unless Dr Gunatilleke’s community is more damaged than ours due to the war – he has no priority rights to be heard by the global community, leave alone speak on their behalf.

The 2009 pain and loss is the manifestation of cumulative pain and loss that Tamils accumulated over the years. Unless addressed during this generation, like the Coronavirus – it will mutate to produce far more damaging outcomes which would have global impact.

China’s current government’s interference with the Silk-Road heritage towards current economic benefits invoked exponentially the cost at that time at present values. Such interference cause exponential damage when so invoked by non-believers. One who seeks the blessings of the past would not interfere with the heritage. The fact that Coronavirus began in China and spread from China confirms that the Heritage has been disturbed. Likewise, the Sri Lankan government celebrating victory instead of remembering and paying its respects to all those who died and/or were damaged due to the war  -  invoked the Heritage of Democracy towards which many Sri Lankans forewent their existing autocratic powers. At today’s value this is something that is far in excess of the skills and abilities of the current government which made itself dependent on China’s handouts – including by selling Hambantota port.

Sri Lanka has become a state that is dependent on regional powers. India supported the LTTE out of common belief. If China also had helped the government through Buddhist belief – then Hambantota would not have been sold potentially to carry Coronavirus by sea. On the basis of effects – the indicators that the sleeping dragon that the Silk Road is – is killing all outsiders to that heritage.  A Chinese who desires current outcomes without paying her/his respects to ancient China is an outsider to the Silk-Road.

Ms Craven, I do believe that Dr Gunatileke is driven by desire for current profits out of the pain of Tamils. In common terms this could Australians who seem to be rough and less educated than him in terms formal pathways. On the basis of my belief as illustrated above, I urge you to assess both our communications and take appropriate action.