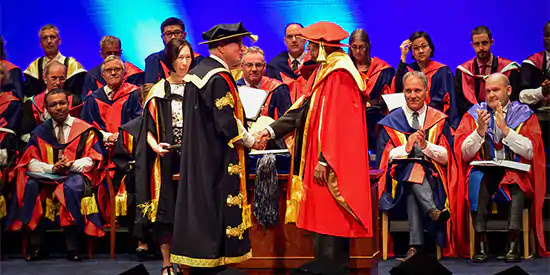 In recognition of his distinguished contribution to economic, education and human rights reform in Sri Lanka, Prime Minister Dr Ranil Wickremesinghe has been awarded an honorary doctorate in law from Deakin University. – February 2017

Whether is it one’s educational qualifications or other achievements – those who depend on their past fail to live the present. As per the philosophy of rebirth - we  carry forward only our Truth from the previous life into the next one. This is also the reason why Dual citizens are not allowed to make laws in Australia and in Sri Lanka. When we migrate from one country to another – if we take the benefits  derived  in the first  country into the second one – they would have difficulty merging. But Truth being Universal – will manifest into the mind of the migrant to take new form needed in the new nation.

When my Sri Lankan Chartered Accountancy was not recognized in Australia, by employers looking for cheap labour I did get upset. But because I studied and practiced Accountancy with firm commitment to fundamentals – I was able to perform well. Some promoted me whilst others   were reluctant. The University of NSW was one of the latter.

While despite my contribution – I was punished by the Australian University system, Prime Minister Ranil Wickremesinghe was awarded honorary doctorate in law by Deakin University of Australia – for the reasons stated by them as follows:

[ In recognition of his distinguished contribution to economic, education and human rights reform in Sri Lanka, Prime Minister Dr Ranil Wickremesinghe has been awarded an honorary doctorate in law from Deakin University.]

A professor from the same Deakin University ‘told me’ to take him off my email list after I was critical of his criticism of Mr Rajapaksa as if Sri Lanka was junior to Australia. For example I wrote as follows on 23 October 2012:

[More and more Australians of non-Sri Lankan origin – (for example – Professor Damien Kingsbury , Director, Centre for Citizenship, Development and Human Rights, at Deakin University )  are engaging at the human level in the Sri Lankan issue. The real value of such engagement cannot be objectively measured – largely due to confidential sharing. Relative to Transparency, this Confidentiality   has  lesser value in Democracy. In terms of Sri Lanka,  the investment in Democracy is far weaker than the investment in Autocracy. Hence who says something is of greater value than what is being said. The more Equal the Opposition we have – the closer the matter gets to the democratic level. That’s when it is ready to be measured objectively. That is when it contributes naturally to the system of Democracy.] Sri Lanka Guardian article headed ‘Australia-Sri Lanka relations.’

Professor Damien Kingsbury also threatened to take legal action against me if I did not remove him from my email list. As Mr Ranil Wickremesinghe did recently and as Mr Sampanthan is doing right now – I refused to leave my position vis a vis Professor Kingsbury in terms of Sri Lankan issues presented to the Australian Public. I asked Professor Kingsbury to go ahead and take legal action. He did not. Relative to me, as an individual , Mr Ranil Wickremesinghe did not have the courage to take legal action against his boss – the president.  I did, against the Vice Chancellor of the University of NSW and as expected lost in Court to his legal team but the Governing Council sacked him. I learnt about the sacking through Court staff who connected the dismissal mainly to me. To me, I was the second last straw – as the carrier of the consolidated belief of migrants in that University that invoked the total migrant power of that University – including overseas students, and empowered the last straw to break the back of the VC. Law expert Sir Anthony Mason who was Chancellor of UNSW, recognized the Truth in my complaint and ordered an inquiry. Eventually the Courts did not deliver at the higher levels but global powers brought my book Naan Australian to the National Library of Australia. That is the way of Truth.
As per the Deakin University report :
[Opening his address with reference to Alfred Deakin’s historic visit to Sri Lanka in 1890, Dr Wickremesinghe concluded with a verse from the Dhammapada – a widely-read collection of Buddhist sayings:
‘All that we experience begins with our thoughts. Our words and deeds spring from our thoughts. Therefore discipline your thought process, train your mind to be detached, the way forward will then be clearer.’]

Sorry Dr Wickremesinghe. The base is our Truth. When we become messengers of Truth – the mind is bypassed. To the person strongly influenced by the ‘external’ the influence is from outside. That also can bypass our thought when we become the medium of the devil. ‘In through the ear and out through the mouth’ is known as hearsay and is inadmissible in a court of law.
SPUR   (Society for Peace, Unity and Human Rights for Sri Lanka Inc), Australia published the following about the above ‘experience’
[The ‘Island’ newspaper article of 10 March 2017 entitled “UNP makes light of UPFA question on Tamil Diaspora using internet to spread racism” has reported that Prime Minister Ranil Wickremasinghe stated in parliament that “a group of Joint Opposition (JO) members had joined hands with LTTE cadres to stage a protest against him while he was in Australia when Deakin University conferred an honorary degree on him” and that “the JO activists and LTTE extremists had protested against him and they were together shouting at him using public address systems”.  The article also stated that the PM claimed that “Because when I was in Australia some 20 persons, supporters of the Joint Opposition and the LTTE protested while I was coming from  Deakin University. So, there are occasions these two groups work together”.]
As per my Belief – Dr Wickremesinghe lost the Presidential elections because he did not have the Tamil votes. As mentioned above that was the occasion when the two worked together and as a Tamil I have felt deeply sorry for such. That was ultra anti-democratic . But it is also the Truth that majority Sri Lankans are anti-democratic  – often by ‘buying’ others’ rights. I felt upset because – in 2003 –when I was invited to work with the LTTE Administration through a UNDP project, in war-affected areas, I concluded that it happened due to my belief in Mr Wickremesinghe’s leadership above that of Mr Rajapaksa’s. That investment was seriously damaged in 2005 when Democratic rights of Tamils was denied by the LTTE. To me it was a debt owed by our Community to Democratic Sri Lanka.
I included LTTE as part of my community through the members I had direct experience with.  This  ‘settled’ the above debt naturally through my own contribution to democracy, stored and carried as Reserve. I was therefore rewarded by the indicators that Mr Wickremesighe  was friends with Tamils which I shared two days before Mr Wickremesinghe was overtaken by Mr Rajapaksa:
[During the early hours of the morning I had this dream in which Mr.Ranil Wickremesinghe was comfortably socializing in our social circle. In physical terms this is not likely to happen. But in real terms this has already happened.] Pain of Lanka’s globalization – at https://lankanewsweb.net/featured/33942-pain-of-sri-lanka%E2%80%99s-globalization

After the events since 26 October, I realized that I had the premonition of a believer. This confirmed to me that I was also a medium through which Truth manifested Itself in this regard. It was therefore upsetting to me to read the following:
["I didn’t take any steps to enter into any agreement with the LTTE in order to win a presidential election.] Mr Wicremesinghe – as reported by Island of 18 December

Majority Sri Lankans use horoscope for guidance. I believe that when we are born we start life with zero advantage or disadvantage. The horoscopes  confirm the structure of our sovereignty  - particular to the individual. But if the past is invoked as is for current benefits – they invoke with interest the other side of our Truth in the past. Likewise in immigration.

Some said that Tamil National Alliance came to an agreement with the UNP during the recent political turmoil. It did not make sense to me. But as part of the Tamil community – I rejected any quid pro quo and kept sharing as per my Belief.  Hence when TNA was recognized as  the balancing power I felt as if I had strongly contributed to that. May be not many  read my articles. But by now I know that the god within me reads all of them and it is naturally shared with other believers in democracy.

By invoking LTTE – Dr Wickremesinghe was rejecting the militant parties within the TNA. The lord of democracy within TNA would manifest next time – not through Mr Sampanthan or Mr Sumanthiran of ITAK – but the militant groups within TNA. LTTE came about through the militants who were strongly affected by Sinhalese using majority power freely – as if they were the only the sole leaders of Sri Lanka. The pain was in the victims who did not retaliate. That would not go away through ‘shows’ of reconciliations and handouts. Every member of minority community who believes s/he is Sri Lankan – but is ‘told’ otherwise carries this innate power of belief which clears excesses by other sections of their respective communities.  When UNP fails to value them it would be sidelined by Tamils who would leave it to the militants to reinvoke militancy.

That is what happened with Central Bank when Mr Arjuna Mahendran – a Singaporean in mind, was brought in – a parallel of Deakin University Doctorate in law for the Sri Lankan President.

This is why Dr Wickremesinghe who does generally represent Sri Lanka as is – did not have the premonition that I had on 24 October. One who includes LTTE through their Truth would work the whole of the Tamil Community. Likewise, one who believes that LTTE are Sri Lankans would not use them or their community as door mats. Shame on you Dr Wickremesinghe.  Renounce that handout from Deakin University – and be true to yourself. That is the only way to preserve your Sovereignty and therefore lead Sri Lankans to realize Sovereignty through politics. If you are not able to – then you need to renounce your unitary state claim. If in Truth Federal structure has already happened – then unitary state becomes history. I believe that it is still unitary because of some of us – independent Sri Lankans including of Tamil origin. Seekers will find and keep the value.

The speaker needed time to make a decision on dual membership by members of Parliaments. The way we had two Prime Ministers, two Leaders of Opposition – we may in reality have two Parliaments – one to show and the other one as door mat. The believer already knows – that no SLPP member is eligible to sit in Parliament until s/he enters parliament through SLPP. But the Speaker elevated such a person to Leader of the Opposition position by pushing aside the Tamil leader. If believers are used as door mats the karma returns to the causer – to divide her/his party internally. UNP needs to learn from SLFP’s bitter lesson.