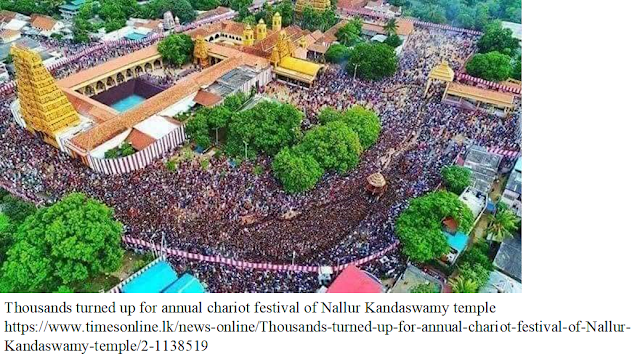 HOW SACRED IS OUR PARLIAMENT?

Last night, watching on TV, the main festival of Nallur, my mind went into that as reality. When the priests performed the sacred ceremonies, I felt that I was part  of their team. Later when the chariot was being pulled by civilians, I felt I was pulling the chariot. Ultimately, I was also one of the thousands of devotees without any higher portfolios.

This morning I thought of the protestors in front of the first Sri Lankan Parliament known to me, who later caused the invasion of the official residences of the President and the Prime Minister:

As per my discovery, belief renders the perfect order of Sovereignty. This order would be different in form to other orders but would be in harmony with its natural environment.

Nallur in Northern Sri Lanka and Kathirgamam in South are, for the same deity – Murugan. Nallur Murugan is known as Alangara Kanthan – richly presented Murugan. As per the Hindu :

[Kataragama’s main temple of the Maha Devala is dedicated to the Hindu God of War, Skanda. Said to have six heads, 12 arms, 20 names and 2 wives, Skanda is also worshipped by Buddhists as the Kataragama Deviyo.

According to legend, Skanda arrived in Sri Lanka and liked the gifts bestowed by the Sinhalese - a house of leaves and a beautiful consort. And it is the romantic union of Skanda and Valli Matha that is commemorated annually.

Every night of the festival, a procession takes place in which the yantra talisman is borne in a casket to the temple of Valli Matha and left briefly in its inner chamber.]

The belief of a Tamil elder is presented as follows:

[Sir Ponnampalam Arunachalam refers to those description and concludes (in his thesis on "Philosophical and Religious Studies and Translations") as follows:

"Muruka would thus appear to be a deity in whom were amalgamated many legends and traditions, many aspects of religion and modes of worship, primitive and advanced, and to embody the Hindu ideal of God immanent in all things and manifesting himself wherever sought with love." ] http://kataragama.org/research/neelakandan.htm

The ceremonies in Nallur – are based largely on South Indian Hindu structures. In Kathirgamam,– we do not ‘see’ the deity and the priests cover their mouths with masks. No mantras are chanted. Likwise, in Kathirgamam’s Northern parallel of Selva Sannithi – exept Vel which is a weapon representing Energy is at the altar.    Both are  in indigenous areas of South and North respectively. Their Murugan would appear to them as per their own forms of belief. The LTTE chief’s home is close to Thondamanaru, where Selva Sannithi Murugan is.

If the protestors included indigenous folks or Buddhists – the deity in the first parliament, in Colombo,  would not appear to them. That Parliament was built in 1930, under British governance. Indigenous folks are independent of the British under whose rule the Parliament at Galle Face was built. That is now the Presidential secretariat. The parliamentary power developed by a different mind structure would not work naturally in a Presidential structure.

In terms of Buddhists –   the Parliament at Sri Jayawardenepura Kotte    was the appropriate building  / place for their belief based protests. Protests are  Opposition and work naturally and exponentially when they are belief based.

Interestingly, the site - Sri Jayawardenepura Kotte, records the following ancestry – as per Wikipedia:

[1.      On 4 July 1979, then Prime Minister Ranasinghe Premadasa obtained sanction from Parliament to construct a new Parliament Building at Duwa, a 5 hectare (12 acre) island in the Diyawanna Oya (off Baddegana Road, Pita Sri Jayawardenapura-Kotte) about 16 kilometres (9.9 mi) east of Colombo. The island was where the palace of the King Vikramabahu III's powerful Minister Nissaka Alakesvara had been situated. It had belonged to E. W. Perera prior to being vested in the state….  It was officially opened on 29 April 1982 by then President J. R. Jayewardene.]

Alagakkonara (Sinhala: අලගක්කෝනාර, lit. 'Alagakkōnāra', Tamil: அழகக்கோன், lit. 'Aḻakakkōṉ'), also known as Alakeshwara, were a prominent feudal family that provided powerful ministers and military rulers during the medieval period in Sri Lanka. Although some historians say that the family was of Tamil origin originated from Madurai or Kanchipuram in Tamil Nadu, India. They arrived in Sri Lanka around the 13th century and naturalized themselves in Sri Lanka. One member of the family is noted for founding the current capital of Sri Lanka, Sri Jayawardenepura Kotte as a fort from which he waged a war against encroaching tax collectors from the Jaffna kingdom in the north. The family lost most of its influence after its leader was taken captive by the Ming Dynasty (Chinese) Admiral Zheng He in 1411.

3.       After Alakeswara’s death, established as between 1382 and 1392, there was disunity in his family with family members fighting each other for power and procession. Kumara Alakesvara, half-brother of king Bhuvanaikabahu V of Gampola controlled the region from 1386–87 and was followed by Vira Alakesvara of Gampola from 1387 onwards until 1391, when he was ousted by the rival claimants relative. He came back to power with the help of foreign mercenaries in 1399. He ruled until 1411 when he confronted the visiting Chinese Admiral Zheng He resulting in a war. Zheng captured and took him to China, returning him to the country a year later. However the humiliation suffered due to this incident, and the decades of infighting within the family, greatly diminished its political power

About the Silk Road

4.       Six hundred years ago, a Muslim admiral by the name of Zheng He helmed the famous treasure ships that explored Southeast Asia, South Asia, Middle East and East Africa during 15th Century Ming Dynasty, almost 100 years before Columbus and Vasco Da Gama explored the New World. He established a tributary system centered on the Middle Kingdom, along the maritime silk routes in the Indian Ocean.

In 2013, Xi Jinping resurrected this maritime silk road and economic belt as his “One Belt, One Road” development strategy, this time with the maritime route continuing past the Red Sea into the Mediterranean due to the Suez Canal.

Surprisingly the renowned admiral of the imperial Ming navy was actually not Chinese, but a Central Asian Muslim. Born Ma He, the son of a rural official in the Mongol province of Yunnan, he was taken captive and trained as an imperial eunuch assigned to the court of Zhu Di the Yongle emperor (1402-1424). Renamed Zheng He, he was promoted to lead one of the most powerful navies at that time.

5.       On his third expedition in 1409, Zheng He allegedly carried 30,000 troops, stopping at Champa, Java, Malacca, Sumatra, Ceylon, Quilon, Cochin and Calicut. On his fourth expedition in 1413 he went west of India, visiting Hormuz and Yemen.

6.       During a September 2013 a visit to Kazakhstan, China's Chinese President Xi Jinping introduced a plan for a New Silk Road from China to Europe. The latest iterations of this plan, dubbed the "Belt and Road Initiative" (BRI), includes a land-based Silk Road Economic Belt and a 21st Century Maritime Silk Road..

On 22 June 2014, the United Nations Educational, Scientific and Cultural Organization (UNESCO) named the Silk Road a World Heritage Site at the 2014 Conference on World Heritage. The United Nations World Tourism Organization has been working since 1993 to develop sustainable international tourism along the route with the stated goal of fostering peace and understanding.

Heritage is our legacy from the past, what we live with today, and what we pass on to future generations. Our cultural and natural heritage are both irreplaceable sources of life and inspiration. https://whc.unesco.org/en/about/

Conclusions as per my belief based connection to the above:

1.    the UN listing happened after ‘New Silk Road from China to Europe’ plan was announced by President Xi Jinping and hence was influenced by China’s power – consciously or subconsciously.

2.    The new Sri Lankan Parliament is on a heritage site and the heritage includes war against Jaffna Kingdom. This is an unconscious memory of believers in that place, which explains the active war after 1982 – beginning with the 1983 pogrom which many Tamils claim was ‘planned’. A heritage also has perfect order and ‘looks – planned meticulously’. An example as per my belief, is the Corona virus that spread exponentially, due to disturbance to the Peace of Silk Road heritage. When heritages are disturbed, they become dementing spirits. This is a belief held by Indigenous Australians also. If there is recognition of positive belief, there has to be equal recognition of lack of belief / followed by negative belief – often on the basis of science, which limits us to currently practiced  theories and laws. These may be intellectually  balanced but they would not result in Democratic Governance which is based on Equality of  belief – including that of a junior.

3.    The basis on which President Mahinda Rajapaksa was influenced by Chinese Government would have included the past karma of that place - Sri Jayawardenepura Kotte, due to belief in karma, activated by the practice of Astrology in Public life. This invoked the stronger activation of past karma which resulted in Chinese President Xi Jinping becoming the medium of  Admiral Zheng He’s spirit. This resulted in Hambantota Port being opened in 2010 the year after LTTE was defeated. The Chinese President’s declaration in 2013 would have been strongly influenced by his victory with the Sri Lankan president, thus invoking Chinese Admiral Zheng He in him. Both leaders were living off their past. It eventually resulted in the disunity within family which is now strongly indicated by the Rajapaksas.

4.    This year’s Sri Lankan protests were NOT belief based but were reverse Democracy which empowered Mr Ranil Wickremesinghe – one defeated by voters without belief in Democracy confirming the saying ‘man proposes, god disposes’