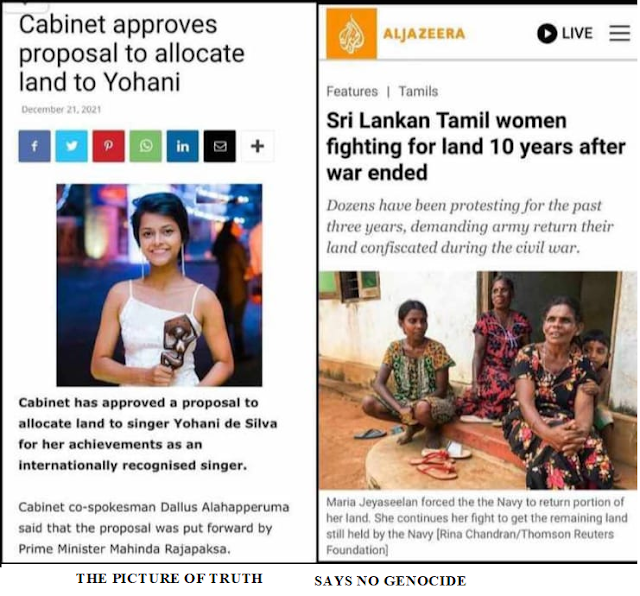 They say that a picture is worth a thousand words. As per my Tamil culture we carry our Truth as our Karma. As per my discovery – this karma surfaces when our mind is still or idle. When the mind is still, positive karma surfaces. Hence Yoga Swami of Jaffna said ‘Summa Iru’/Be Still. When the mind is idle negative karma surfaces. Hence penance is done to the Navagraha shrine in Hindu temples. The Corona invokes positive karma in the still mind and negative karma in the idle mind. The pattern of fall of political leadership confirms this through the pandemic. It is a pandemic due to exponential spread. The pandemic began in China due to the Silk Road Heritage being disturbed for current economic profits. All those who even ‘Thought of Profit’ paid the high price of exponential costs.

The pandemic happened in Sri Lanka after the end of the armed war. From then it ought to be a heritage and once that happens there are no separate costs or benefits / losses or wins. If the armed war was over – then it ought to have been of heritage value to all affected. Both side and their associates  keep invoking the war for their personal benefits without realising that they are invoking a war-pandemic. The above picture came to me with a footnote ‘WHAT A JOKE’. It would have been considered painful by a victim of war who continues to suffer. Rina fought the Navy and got her Land. We fought in Northern Courts for the higher heritage of Thesawalamai even though dowry was given to the daughters. One of them got the ancestral home as dowry but claimed it was ‘Donation’. Jaffna Court of Appeal upheld this and ruled us out of our inherited leadership position. When a junior genuinely respects a senior – the position of senior is instantaneously inherited by the junior. Relationships without respect are no relationships. They are mere associations without heritage value. The position of Administrator of the Estate would have confirmed the true position we held in the family. But the Courts took over the position and awarded it to the Petitioner – who got the Vaddukoddai ancestral home as dowry. How can such a community expect justice in terms of Land which is more visible and therefore less valuable relative to Rights?

Yesterday, I received an email that was according to which, the statement headed as follows was released to Media on 24 December 2021:

The above includes the following:

[The Complaint : That the LTTE is not a terrorist organization and that the Government has to be responsible for their transformation.

(Mr CVW): My comments:  LTTE was a political movement consisting of Tamil youth who fought for the freedom of the Tamils against Sinhala hegemony.

They were similar to Subash Chandra Bose’s military unit in India that fought for the freedom of India from the British.  If not for the planned colonization of Tamil speaking areas with persons brought from outside the Northern and Eastern Provinces, the passing of ‘Sinhala Only’ Act , Standardization in  Higher Education, the  1958,1983 and other pogroms against the Tamils where infants, youth and elders among Tamils were brutally killed and women raped,  burning  of the Jaffna Library, and militarizing the North and East,  the Tamil youth, some of whom had been selected to the Medical & Engineering Faculties of our  Universities, would not have joined the  freedom movement to militarily attack the Government Forces. Various Sri Lankan governments have held official talks with the LTTE from time to time. Governments have allowed the LTTE to visit and stay in all parts of the country, including Colombo. The government lifted the ban on the LTTE in 2002. I have also read in the media that the Sri Lankan government provided arms to the LTTE in the late 1980s. Therefore, from time-to-time Sri Lankan governments have referred to the LTTE as a Terrorist organization for their own needs and later refrained from doing so. This has created a situation of ambiguity among the people in terms of their long and short term memories.

Keppetipola Dissawe was called a terrorist or a criminal by the British and as a Freedom fighter and a Hero by the Sri Lankan peoples. LTTE cadres were freedom fighters against the cruel and brutal activities  of  successive Sri Lankan governments. Indeed it is the Sri Lankan Military who qualify for description by that expression. The Tamils of the North & East do not refer to the LTTE as Terrorists; only the government and some Sinhalese call them so.

I have the right of freedom of expression under Article 14 of the Constitution to state my views.]

Freedom of speech is a Human Right only if one believes. Mr Wigneswaran’s belief has been published as follows:

[…….A more mystical interpretation of the case surprisingly comes from a Supreme Court Judge in Sri Lanka, C.V. Wigneshwaran, who is a long-time devotee of Premananda and one of many defence witnesses rejected by the courts as a ‘wishful thinker’. The most important thing to recognise, says Judge Wigneshwaran, is not only the deplorable infringements of human rights, or even the manifest injustices taking place in the Indian legal system, but simply the prisoners who have transformed their lives after meeting Premananda in jail.]

If indeed, Mr Wigneswaran believed that his guru was wrongly punished by the Indian Judiciary, he had every right to state as above. If true – the Indian Judicial system would have been ‘cursed’. If false – then the curse would come back to origin.

If Mr Wigneswaran believed that the LTTE was a ‘Political Movement’ then as Chief Minister of Northern Province, he invoked military rule on Northern Province of Sri Lanka. The LTTE is known to be a military leadership that killed civilian Tamil Political leaders to ‘takeover’ power. That is the way of Asura’s – humans with animalistic tendencies. The LTTE churned the Tamil Community of  Sri Lanka with intellectual politicians on the other side as their Opposition. The poison from the churning came out before the nectar. The poison was the suicidal minds that led to the early death  of combatants through suicide. The nectar followed but was hijacked by the LTTE who took it to their end of the community. Then the Tamils of North did as  Vishnu did and took Mohini form to seduce the Asuras. That was how Mr Wigneswaran became their Mohini. But given that Mr Wigneswaran started living with them – he produced heirs who were Asuras. This we know through his time as the Chief Minister of Northern Province.

Now Northern Province is Asura dominated. To such a community – it would be basic right to fight without rules and die. Likewise, to mate with their own children – purely on the basis of physical attraction. Hence Mr Premananda would be right for them.

At the other end are those who forego at the physical level – and are blessed with the sweetness of Divine Love that the likes of Mahatma Gandhi realized through abstinence at physical level. He is not mentioned by Mr Wigneswaran.

Let us see what the People of North and East seek at the next Provincial Council elections. If they seek Asura leadership  – then they would accept early death of themselves as well as their children in the fitness test. If they seek to be Divine – then they need to accept the punishment that LTTE was produced by their own haste to enjoy physically and thus protect their intellectual heritage.

If the Tamil Diaspora ‘sees’ deaths – and does not know why but claims Genocide instead of ‘Suicide’ then as per their soul power they will produce more and more Asuras who would be the bodies in which Mohini Pisasu / Demon – has found homes.