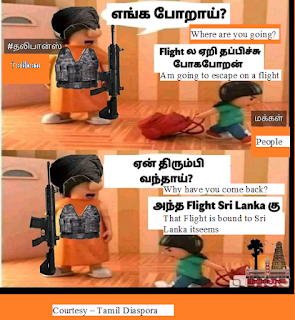 ‘Self determination is a Universal Freedom of Choice irrespective of any other reason to deny it. Religion or Ancestry  probably plays a sentimental or semantic role. Prison escapes cannot justify history and a matter master of survival. The Pottu is a Beautiful eye of Indian or Tamil Girls in the eyes of the beholder., and has tricked our Sinhalese Kings to bring them to Sri Lanka.’ – Trevor Jayatilleke

‘On what reasonable basis did the expectation of the promise of justice for Catholics butchered by smiling assassins carrying backpacks in 2019 rest, we may ask? This is a State that had killed children for ransom even after all the terrors of war had ended and moreover, made sure that any legal accountability for the same would be dissolved in the dry anguish of the tears of the mothers and fathers of the slain. This was all done remorselessly and in full knowledge of the sins so perpetuated. Now the Cardinal bewails the unfortunate result of conferring one man with too much power.

Along with him, senior Buddhist clergy who deepened the faultlines of majoritarian Sinhala Buddhist chauvinism underpinning the pathetic plight of this land, join that chorus of laments. Are these worthy religious men so bereft of common sense that they would not have perceived the consequences of their own actions? That hard question must also be asked from professionals, judges, lawyers, heads of industry and commerce and motley civil society outfits who sang hosannas in hailing this political set of rogues as opposed to the previous lot.  We are as much to blame as our politicians, let it be said.’ – Ms Kishali Pinto Jayawardene

As an independent Tamil citizen of Sri Lanka who respects Sri Lankan ancestry – I responded to Trevor as follows:

Thank you Trevor. You state:

‘The Pottu is a Beautiful eye of Indian or Tamil Girls in the eyes of the beholder., and has tricked our Sinhalese Kings to bring them to SriLanka.’

I take it that you would have considered a Pottu wearing lady to be attractive enough to be your queen. The kings of Ravana ancestry would have considered the Pottu to confirm the wearer’s chastity – Katpu in Tamil. The Pottu represents the Third Eye of Lord Shiva. Lord Shiva transcends the physical to experience eternal love. King Ravana worshipped Lord Shiva and he did not touch Seetha – Rama’s wife who was personification of Katpu. This was why Rama – the Avatar - had to come to defeat Ravana who was protected by his high mind structure demonstrated by his respect for such a lady. His heirs would have intuitively known about protection that such chastity renders to the husband. Hence their choice of queens from Hindu India.

But times are changing and so are feelings. My advice to the parallels of Ms Kishali Pinto Jayawardene – is this:

When we have wisdom in a subject matter at the higher level – and publish it at that level – it is like singing "Mari Mari Ninne " song, Composed by  Thyagaraja Bhagavathar, in Telugu – recognized as the sweetest of Indian languages.  My version of that song is Paadariyen Padippariyen  sung in Tamil – the language of those according to Tamil Poet Bharathi – build bridges to Sinhala Island.

When folks desire high status copy Ms Jayawardene’s views – the Energy does not sustain them. But  if juniors draw on that Energy and express at their level, the Energy is preserved as motivational Energy and Courage. Towards this we need to think like country folks who would enjoy Paadariyen Padippariyen ( I do not know music nor am I educated) when we are in the transitional justice mode.