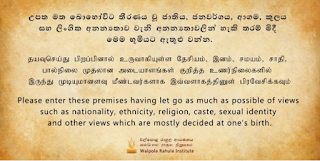 [The uniqueness of the Walpola Rahula Institute in Sri Lanka, begun by Venerable Galkande Dhammananda the only Monk pupil of late Walpola Rahula Thero, probably one the greatest visionaries of our time, is depicted by the above notice that greets all visitors to the Institute at its entrance.] Ritualism is not Buddhism – Venerable Galkande Dhammananda – by Raj Gonsalkorale – published by Elanka

As per the message – I need to let go as much as possible thoughts my particular nationality.  If I did so – would I be eligible to use Common Resources of Sri Lankans? In any case why would I need to go to such an institute when I could instead be sharing my realisations with fellow Hindus?

I got to know Raj through Sri Lanka Reconciliation Forum, Sydney. If we did not recognize that there were amongst us those who identified with one ethnicity more than Sri Lankan Nationality – we had no mandate to structure that forum. Raj states:

[Human Rights Advocate Radhika Coomaraswamy who was a guest speaker at an event conducted by the WRI a while ago said she felt “safe” in the environment of the WRI.]

I write practically everyday on Human Rights issues but thus far Raj has not mentioned my name to identify with or oppose my expressions publicly. This confirms that Raj is not practicing what he preaches through lessons of the Walpola Rahula Institute in Sri Lanka. I doubt that Lord Buddha would have asked us to discard relativity I do believe that Lord Buddha would have shown us how to transcend relativity.

This morning for example I wrote as follows in response to a Tamil medical professional educated in Sri Lanka, who was opposing rich Hindu temples & Brahmin priests:

[We have a Brahmin at our temple in Thunaivi. The money we earn through our own work – is shared with that Brahmin also. Usually the owners of temples are non-Brahmins. We become the outer supporters. The temple as a whole is an institution. Like a family we share Energies through common ownership. A government likewise shares Energy through various avenues. In turn it gets empowered by the citizens’ energies. It is like in family between parents and children. Any institution achieves this as the ultimate return. ]

If there is no relativity there can be no hierarchical structure or laws to regulate it. Hence there would be no difference in status between parent and child. Relativity confirms awareness of structure and its order. If we discard it how do we transcend it? In fact by discarding the higher common order, we may open the doors to be ‘free’ in our natural culture that we are not conscious of. This is often  the reason why ‘freedom’ fighters become cleverer than the law abiding citizens who are answerable to higher authorities in the higher common structure.

Buddha showed us that renunciation leads to transcendence of the physical. He did not discard the physical but raised it to the higher level where it becomes Energy accessible by all. That confirms that we have realized our Sovereignty – as individual or group.  One who draws benefits as a group has to work towards group sovereignty and not individual sovereignty.