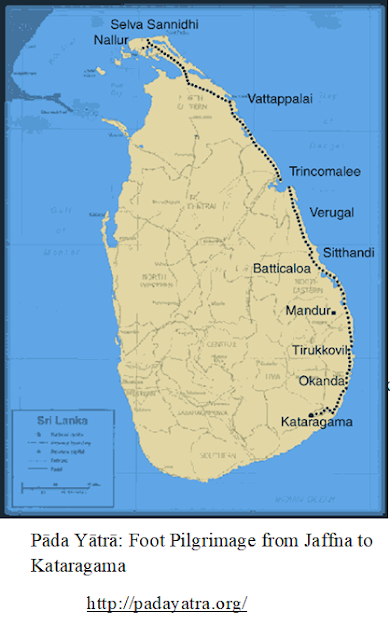 Often when one is focused on the benefits of position status and money, one pretends to be lawful. When such a person thinks s/he is ‘free’ s/he loses her/his inhibitions and tends to behave as if one’s word were the law.

Yesterday, I highlighted as follows:

[President Gotabaya Rajapaksa on Thursday  told Sri Lankans that he was the leader that they
searched for and openly flaunted his strong Sinhalese-Buddhist roots to  say that he was the right man to hold the highest office  .. in the country.
Addressing the nation on the occasion of  Sri Lanka's 73rd Independence Day, Rajapaksa said, "I am a Sinhala Buddhist leader and I will never hesitate to state so. I  govern this country in accordance with Buddhist teachings’..] Times of India

My recent contribution to Australia’s Immigration Policy would help interpret the above in an independent environment:

As a leading nation in the global context, I feel that Australia is responsible to ensure that Sovereignty of the Human Values is maintained through Permanent Immigration from one place/country  to another.

It is interesting that the ‘Partner’ category within ‘Family Stream’ ranks highest - at
72,300, in 2020-21. This confirms the importance of higher common law which often begins with marriage to form a family. The partner thus becomes the first member of wider society. Those who successfully mind-merge through such partnerships contribute strongly to Common structures in wider society.

Equal ‘other side’ is therefore essential in Democratic systems. A family that is democratic would promote democracy in the community and society it is part of.

In democracy, the tendency to take ‘freedom’ before one matures is a strong challenge against maturity and independence. One who is indebted to a person or group is not independent. When such a person thinks s/he is free and expresses it in words and/or actions, we have to produce the other side if it is not to slip into the Universal Energy and add to Global frictions and wars and/or to global disasters such as the current pandemic.

The rule of nature is such that it manifests the Equal ‘other side’ when we manifest on our own, when we are indebted. It is to prevent such catastrophes that we have laws to regulate our thoughts, expressions and actions. To the dependent person, the word of the person/group one is indebted to becomes the law. In a family, this is the person who sacrifices most  for the common good. Likewise in a Community.

In a democratic family between the two partners, this is taken to be the other, until known otherwise. In a nation, this is the government or its Equal Opposition. ]

When the Sri Lankan President made the above declaration, on the strength of his position status – and it is not opposed in the environment in which he made that statement – it would confirm – that the other side manifestation was being facilitated at the People’s level and v.v.

The March from Pottuvil in Eastern Sri Lanka to Polikandy in Northern Sri Lanka – began on 03 February – one day before Independence Day celebrations by the  Lankan government.

As per 2020 Parliamentary elections Pottuvil voted for SJB whose chairman is Mr Sarath Fonseka who led the Government military to victory against the LTTE. SJB is currently the leading opposition in National Parliament. As per my knowledge, the dominant religion in Pottuvil is Islam. Hence, one is entitled to conclude that the March is a protest against the way the Easter Bombing inquiry is being conducted by the current government and also the enforced cremations due to Covid19 which were seen as denial of rights of Muslims. To the extent both are in breach of the Sri Lankan Constitution, the March is legitimate in balancing the wrongs by a government.

Significantly, Pottuvil is between two points in the above map of Pada Yatra (foot pilgrimage) about which Kataragama.org reports as follows .

[The great ones who walked the Pāda Yātrā include, notably, the renowned fifteenth century Tamil psalmist Arunagirinathar, who composed at least one Tiruppukal hymn at Kirimalai (near Kankesanturai in the Jaffna peninsula), another at Tirukkonamalai (modern Trincomalee) and fourteen at Katir-kāmam, '(the place of) brilliance and passion', i.e. Kataragama. More recent well-known pilgrims have included Palkudi Bawa and Yogaswami of Nallur. The following account of Nallur Yogaswami's pilgrimage to Kataragama remains typical even today]

I fully believe that when we walk along the same pathway of  Realised Souls, we also get purified.

Hence I identify with the March as Hindu Foot Pilgrimage. Kirimalai is also the place where the memorial ceremonies honoring fathers are conducted by sons.

One then goes to Polikandy  in North which is presented as follows by Wikipedia:

This legendary town is well known for being the birthplace of Thillaiyambalam Sivanesan Soosai, the Chief Commander of the Sea Tigers of the Liberation Tigers of Tamil Eelam or the Sea Tigers, a Tamil nationalist militant group that waged a war for independence in the North and East of Sri Lanka. This town is also the place of birth of the leaders of the Liberation Tigers of Tamil Eelam, Lieutenant Colonel David, Castro (Manivannan) and Kadaapi (Athavan). Polikandy was the first town to introduce the Sea Tigers.]

The link here to my mind is to Point Pedro which is the Northernmost point of Sri Lanka. From Pottuvil to Polikandy, is coastal area.

The important question is – did the Government damage the belief based connections of Hindus who are bound to India through Lord Muruga ;  belief was strongly confirmed by Saint Arunagirinathar?

With this in mind, one needs to question whether the breach of agreement in relation to Eastern Container Terminal (ECT) empowered Natural Forces towards strengthening Northern ties with India to safeguard the provisions of the 13th Amendment which cost India the life of its own Prime Minister. The release of those accused in the case is now with the President of India. But Tamils from Sri Lanka seem to have been ‘forgotten’ including by those marching from Pottuvil to Pulikandy.

The 2009 war was Natural between two ‘free’ forces – neither of which was bound by common law.  The actions have been taken outside the boundaries of common law and hence one needs to look through the pathway of Belief.  The breach in relation to the ECT indicates a strong warning in relation to the 13th Amendment under India’s leadership. If the 13th Amendment is tampered with – the powers of Tamils would naturally strengthen India in the regional war. Keeping the Coastal areas in North & East under Tamil control would contribute towards this. One who abandons the rule of law, risks the attack of Natural Forces.