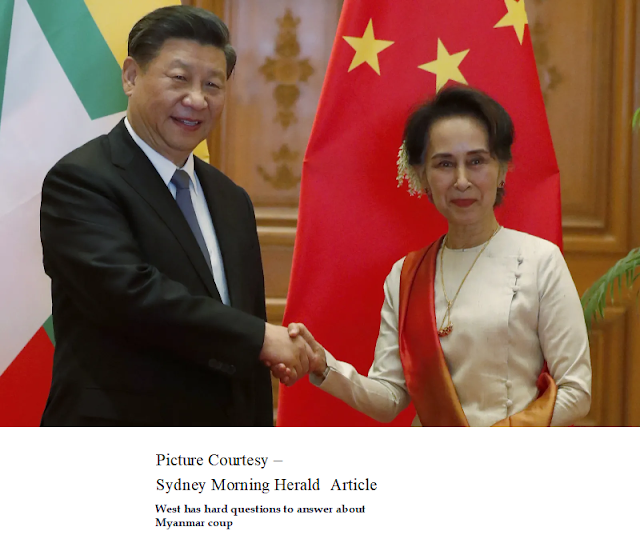 1.     [I used Myanmar not as being on all fours with Sri Lanka but as an example of a country, a state, that was subject to tremendous international pressure and escaped that encirclement by undertaking quite considerable domestic reforms of a democratic and democratizing character; by dramatic political dialogue and opening up. Since Sri Lanka has never been under a military regime, obviously we start at a much higher point, but what is important is the method and nature of the response to external pressure, namely dialogue with political opponents, reform, self-generated change, replacing a tightly closed system and a permanent siege mentality.] Dr Dyan Jayatilleke – April 2012 (Sri Lanka Guardian)

2.     [“The co-sponsorship in 2015 of the UNHRC Resolution 30/1 on ‘Promoting reconciliation, accountability, and human rights in Sri Lanka’ adopted by the UNHRC in October 2015, at the Council’s 30th Session, was an example of abject capitulation from the then-Government. From that position, we have now swung to the opposite end of absolute rejectionism, by withdrawing the co-sponsorship of the said Resolution. We have to find a middle ground,” Dr. Jayatilleke opined.

However, Dr. Jayatilleke claimed that while some administrations are capable of demarcating the middle ground, unfortunately – be it in domestic affairs or in foreign affairs – the administration led by President Gotabaya Rajapaksa has abandoned the middle path in favour of extremes.] Dr Dyan Jayatilleke – January 2021 (The Morning )

3.     [It’s Myanmar today and could very well be Sri Lanka tomorrow, or more correctly in 2024 if the election results are not to the liking of the military or the ex-military brass.

Coups are not always against Opposition parties; quite often they are against governing parties. The Myanmar coup was not against the Opposition; it was against the Aung San Suu Kyi who was the figurehead leader, and the party she leads.

The lessons for Sri Lanka are obvious. We are on the road to Myanmar and are already halfway there. Michelle Bachelet’s Report is helpful in the light it sheds on militarization. ] Dr Dyan Jayatilleke 01 February 2021 (Colombo Telegraph)

In contrast, I identify with the ‘intelligence’ of Mr Swadesh Roy whose ‘insight’ into Myanmar was through the pain of Rohingyas who were :

[After Chinese President Xi Jinping's January 5 visit to Myanmar, MoUs have been signed between China and Myanmar for construction of the Kyaukpyu Deep Sea Port in the Bay of Bengal, on the outskirts of Arakan state and for the construction of a Kyaukpyu Economic Zone. China has long been talking about the New Silk Route or the Twenty-first Century Silk Route. They are also talking about the China-Myanmar Economic Corridor as part of the Belt and Road Initiative (BRI).

According to the experience of Hambantota port in Sri Lanka, Myanmar will also be forced to lease the entire area to China once it becomes part of the port, oil reserve and economic zone. Myanmar will never be able to return the invested money to China through profits from this port. Following this policy of ‘build up infrastructure and occupy it’, China has been successful earlier in areas like Sri Lanka, Laos and countries in Africa. They will be successful in Myanmar too. Another aspect of this Chinese economic expansion is that Chinese citizens gradually settle in wherever they invest. As a result, their citizens stand to benefit from the employment opportunities at these places. Chinese citizens will also come to Arakan in future. The Rohingyas have been ousted by Myanmar's army to create space for the Chinese.]

In his Sydney Morning Herald article ‘West has hard questions to answer about Myanmar coup’ Anthony Galloway confirms ‘insight’ similar to that of Swadesh Roy:

[But soon after her election in 2015, Suu Kyi turned from angel to pariah over accusations the military was waging a genocidal campaign against the Rohingya minority. At times, it appeared the West had assumed the Nobel Peace Prize winner would live up to the version of her we had created in our heads: liberal democratic, progressive and multicultural – rather than a nationalist with authoritarian tendencies.

As global condemnation rightly grew over the Rohingya issue, sanctions were imposed on senior commanders in the Myanmar military and Suu Kyi was shunned on the international stage.

Considering the army was responsible for the apparent genocide, the takeover by the military for at least a year won’t do anything to solve the Rohingya refugee crisis.

The development is a sad indictment of the world’s decline into authoritarianism and the West’s ineffectual policies to stop it.]

When Ms Suu Kyi joined the military against Rohingya refugees the lady became their junior. Instead, if Ms Suu Kyi  had ‘felt’ for the victims, the lady would have developed a protective facility within, which would have connected her to the global powers of democracy. After Rohingya refugee crisis, and in fact due to it – we learnt about the hypocrisy of this lady.

The likes of Dr Dyan Jayatilleke tend to project intellectually so they seem to ‘win’ or be on the winning side.

Myanmar is a warning to the Tamil Diaspora which is also artificially boosting its side. When one thinks of ‘winning’ against military, one becomes its junior or senior at the end. Instead one need to take the alternate route of ownership which naturally brings the support of Universal Powers. Tamil Diaspora which funded the LTTE would continue to promote war and risk military takeover of Tamil & Muslim areas in Sri Lanka. Towards this they are likely to have secret partnerships with others who would help them ‘win’. When they are no longer connected to the nucleus of the pain of victims it is no longer common war but their war.

Be it the Burmese, Sinhalese or Tamils – when they elect those who seems to have the power to protect them from brawn power – they get military government. The  Suu Kyi government was military government and hence it was easy for the military to takeover. One who identifies with the victims accesses the nuclear power and transforms from within. This is the power of minority. This would have protected the BRI’s negative Energy  from its exponential attacks . Given the Pre-existing condition, the King-virus had its stage -  for better or for worse.