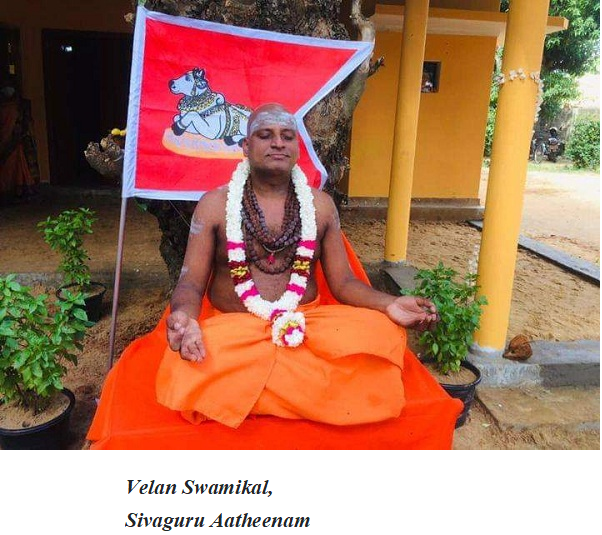 Saint Yoga Swami who is identified with Nallur, in Northern Sri Lanka, gave us Natchinthanai (Good thoughts) in addition to continuous sharing of his spiritual realisations. Many politicians and senior administrators went to Saint Yoga Swami for blessings. This included the son of Lord Soulbury, Santa Swami. Dr Vimala Krishnapillai writes about Natchinthanai and Santa Swami:

[Santa Swami along with a few others played a central role in translating them to English and getting them published by the Sivathondan Nilayam of Jaffna.

When Lord Soulbury died and Santa Swami inherited his father’s title, Yogaswami sent him back to England to do his duty, saying “Go back to England and be a Lord!” These words, like all of Yoga Swami’s utterances were pregnant with meaning. The pun made in English was on the word ‘Lord’ which can be taken to mean God – ‘the one who has no master but himself.’ ]

But Swami did not get directly involved in Politics. Swami was already One with Universal power.

I was therefore shocked to learn today that one of the signatories to the UNHRC was stated as ‘ Velan Swamikal, Sivaguru Aatheenam’

At first I thought with apprehension that it was Velan Swami in Hawaii. But some search confirmed otherwise. It is the person pictured above.

I am disappointed with all of the Tamil political leaders that they were so poor in support of the People that they had to resort to such men in religious robes. Tamil politicians are becoming more and more like Sinhalese politicians who desired the popular vote and ruined Sri Lanka in the name of Buddhism. This is what happens when we have premature freedom.

If we do not separate Religion and Politics by law, we would have more and more wars in Sri Lanka just like ISIS led wars. Each time we use religions status as a political tool – it weakens the consolidated value of our belief in the Absolute. This is the reason why we had the Easter Bombings. The Negative Energy was no longer within the correctable period. It had become Universal Sin. So sad!

The guy pictured above would have all the strength he needs from Nallur where the Administration is Perfect to the true seeker. UN is a mosquito in relation to Nallur - the Absolute