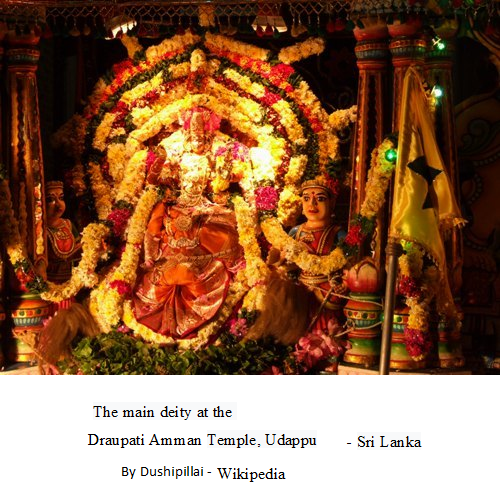 President has no authority to Make or Remove the Prime Minister

The Sri Lankan Parliament is demonstrating the resistance to Democracy, based on Business Unit approach. Using majority power to exert authority becomes negative power. This was the basic reason why I went to prison to preserve my Sri Lankan diversity. The President of Sri Lanka referred to ‘foreign powers’. This would be a manifestation of his own fears if he and/or his group had taken ‘free’ money from say – China. Borrowing without the ability to repay results in  slavery. One who is a slave does not have the capacity to work Sovereign powers anywhere anytime.
When my husband met my cousin Kathiravel for the first time – my husband said something nice about me. Then Kathiravel Anna said ‘You must not us about our own’. My husband valued that very much and elevated the status of Kathiravel Anna – who lived and died a fiercely independent Kilinochchi (political capital of LTTE ) farmer.

The message behind this is that one who ‘makes’ is the owner. My parallel of that is my Sri Lankan qualifications in education. They were made in Sri Lanka. Australian employers who paid me less than its Australian worth – as demonstrated by my performance – could not work my mind due to this declaration of ownership by me that ‘I am Sri Lankan made’. In other words I had to merge my Sri Lankan investment with my Australian investment in my own independent space. An Australian made person who ‘takes me over’ would confirm that I was ‘matter’ and could be possessed.

In Hindu epic Mahabharatham – Dharmar in an emotional state – stakes his wife Throupathi to his opposition Thuriyothanan, in a game of dice. When Draupathi was dragged to the Court as if she was a slave – Throupathi demanded justice by stating to the king and the ministers assembled there – that she was not ‘substance/matter’ to be used as stake in a game. Accordingly Throupathi declares that she was not the property of her husband and therefore was not owned by the ‘winning’ side. A stake has to be an objective matter/substance.

Likewise, any minorities. Wikipedia confirms the protective power of Throupathi in Sri Lankan war as follows:

Udappu village north of Colombo where the main deity is Throupathi Amman - Due to the continuing effects of the Sri Lankan civil war, there are also a number of Tamil refugees from rest of the country living in the village, specifically from the eastern Trincomalee district. People in the village are adversely affected by the effects of the civil war. – Wikipedia
Trincomalee is the home town of Tamil Opposition Leader the Hon Rajavarothiam Sampanthan. The above mentioned refugees crossed from East to West to live in the protection of their faith. That faith was established in that small village due to belief in Throupathi’s commitment to herself as a Sovereign being.

Matter is the outer form of Energy. In democracy, where each one is free to produce the outcomes of one’s work – consumption of that manifestation is also independent of the producer. Whoever produces goes first. In Laissez-faire  trading the customer who comes after the supplier – is taken as right to maintain the balance of sovereignty. Hence ‘the customer is right’ principle. The parallel of that in governance is that the ‘opposition is right’ where the law is produced by one side.

The product made first in the latest political experience – that resulted in chaos in Parliament was the dismissal of the Prime Minister. The order  was produced by President Sirisena. Given the separation of powers between the President who is like the Senate and the Prime Minister who is part of the lower house . The responsibility of the President is to the Parliament defined as follows by Article 42:
[42. The President shall be responsible to Parliament for the due exercise, performance and discharge of his powers duties and functions under the Constitution and any written law, including the law for the time being relating to public security.]

It is my understanding that the Senate in our system does not have the authority to make laws but only to approve the laws made by lower house. Likewise, the President cannot make decisions that are strictly within the responsibilities of the Parliament.

Article 42(4) of the Sri Lankan Constitution states:
[ The President shall appoint as Prime Minister the Member of Parliament, who, in the President’s opinion, is most likely to command the confidence of Parliament.]
The test of Responsibility is built into this Article. The President has to identify with the person who commands the confidence of the Parliament and not the confidence of the President. In this instance Mr Sirisena ‘stole’ the outcome produced by the Parliament through the defeat of ‘No Confidence Motion’ against Mr Wickremesinghe. Towards this he waited for a time when he was alone and isolated the position of Prime Minister from Parliament to possess and use it as substance  instead of the energy that the whole parliament pooled to produce a person in that position. This happens when one is driven by outcomes / money.

It is to prevent such ‘stealing’ that there are separations of powers including between makers and consumers. The Parliament makes the Prime Minister and as the first member of Parliament – the President gets to confirm that such Prime Minister has been made. No individual member of Parliament has the power to ‘dismiss’ a Prime Minister made by the whole Parliament. What is worse is that the President appointed one of his choice and took-over the Parliament’s responsibility.
The Dismissal is unlawful and that should be taken to court by any Sri Lankan voter. By failing to do that Mr Wickremesinghe also has confirmed lack of faith in the Judiciary. His peaceful assembly in Parliament with No 1 title – confirms his belief that he has not been terminated as per the law and that he continues to be the lawful Prime Minister of Sri Lanka. This must be upheld by the Parliament as a priority.


The Energy in stolen goods and / or knowledge will not respond to the person who stole it. It responds only to its maker. THIS is the message from Dharma which to majority Sri Lankans is in the form of Buddha. The President has violated Article 9 of the Constitution and thereby confirmed that he lacks the confidence of majority Sri Lankans. Had he adhered to Article 9 – he would not have ‘stolen’ the outcome produced by the Parliament and therefore the People.