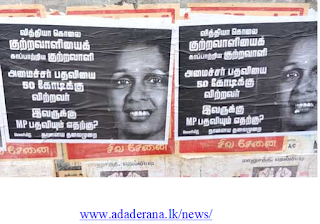 Today is the birth and death anniversary of my cousin Krishna who was stabbed to death in his farmhouse in Kilinochchi, in Northern Sri Lanka. As per reports from those close to Krishna – he was stabbed more than 32 times to death by militants to prevent Krishna from divulging information to the Army to whom he had to report after they released him. Krishna is part of my  heritage from Jaffna and I feel sad that Krishna is no longer alive.

During my Tsunami Reconstruction work in 2005 – the Officer in charge at the Australian High Commission in Colombo  asked me why I would write a report on behalf of TRO – Tamil Rehabilitation Organisation?  TRO  was initially established in Tamil Nadu in the year 1985 - the same year Krishna died. The purpose was to provide refuge to Tamils affected by the war. I did not know back then what the reason was. But I did write the report because TRO did not have the necessary human resources to do the report themselves. Now I realize that I was doing it to reduce the negative karma accumulated in that area through TRO which claimed to be an NGO but was diverting resources for war efforts. Whenever I was asked in Kilinochchi for money donations – I offered my services over which I and only I had control – naturally through my own sacrifices of enjoyment of pleasures at primary level. I was thus protected from any weaknesses in TRO reported as follows in Wikipedia:

[On November 15, 2007, the United States Department of the Treasury designated the TRO under Executive Order 13224, aimed to financially isolate US designated foreign terrorist groups and their support network. Under this order, the Department of the Treasury froze all assets held by the TRO and its designees in US territories, and formally prohibited US citizens from transacting with the TRO or its members.
The Department of Treasury stated that "T.R.O. passed off its operations as charitable, when in fact it was raising money for a designated terrorist group responsible for heinous acts of terrorism ... in the United States, T.R.O. has raised funds on behalf of the LTTE through a network of individual representatives. According to sources within the organization, T.R.O. is the preferred conduit of funds from the United States to the LTTE in Sri Lanka"]

Today, I heard confirmations from Rev Emanuel to whose speech at https://youtu.be/nb73Y58jJK0  I was directed to me, by a leading member of the Tamil Diaspora in Britain.  Rev Emanuel has revealed that monies collected by militants were in Switzerland also. To my mind, that is contaminated money to the extent they were not earned by Tamils for their Independence from Oppression. It was money for revenge attacks and for easy positions in Tamil areas in which the armed militants showed domination. Only the person who is independent owner in the structure through which s/he earns money would share that Independence heritage including through money but not necessarily through money. Those who donate money without feeling connection to the cause are ‘giving’ and not  sharing. Those who take that kind of  given money will ‘show’ more than they really have.
Today I identified with such a person whose pseudo name is ‘Th Th’. This person who to my mind, fears writing under his name wrote in response to my yesterday’s article shared with her/him under the heading’ LTTE Royalty’:
‘And l am not French Tamil. My identity Tamil comes first and the loyalty of the country which gave me protection comes after. I have not sold my identity’.
My response to that was:
[Please to enlighten me, Th Th - the heir of Tamil ancestors – what is Th Th? If that is not Tamil then whom are you fearful of? That person/group is your Master]
The penny dropped later when I read it more seriously. Th Th describes me as RSS ideologist:
[And we are not behind the Hindu ஆர்எஸ்எஸ் (RSS) ideology as you. We are more open in mind to moving forward out of a religious archaic mindset. ]
I did not know what RSS meant. I looked it up through Google which states:
[Hindu Swayamsevak Sangh (HSS) is a subsidiary of Rashtriya Swayamsevak Sangh (RSS) for supporting and mobilising Hindus living outside India. Founded in 1940s in Kenya, it is currently active in 39 countries and boasts 570 branches……….
The UK HSS organisation was established in 1966. Consequent on claims made in a television broadcast by ITV's Exposure programme in the UK on 18 February 2015, the Charity Commission for England and Wales announced that it was opening an investigation into the HSS and two other organisations that were featured. The two other organisations claimed to serve Muslim and Sikh communities.
Among the claims against the HSS made in the broadcast was that a tutor at a summer camp told children that "the number of good Muslims 'can be counted on fingers'" and that "to destroy Hindu history is the secret conspiracy of the Christians". HSS responded by saying that it "promotes diversity and unity" and that it was conducting an internal investigation into the alleged comments "to ensure that those who made them are better informed, trained or prevented from making statements which may be interpreted as anti another community.]

I had already registered in my mind – the anti Vijayakala Maheswaran poster in Jaffna – apparently by ‘Siva Senai’ – published under the heading ‘Posters displayed in Jaffna against Vijayakala’ – at http://www.adaderana.lk/news/48574/posters-displayed-in-jaffna-against-vijayakala-

One who sold her position of Minister for 500 million – Why does this person need Ministerial position?

So – the above picture helped Th Th ‘group me’ as Siva Senai supporter. Had Th Th asked me instead of ‘telling me’ I would have stated that I supported myself even when I am the only one seen to be doing so.  This is possible when we own our work and our inheritance.
With that in mind I read the following news about the Sri Lankan Government’s move in this regard:
[Law and Order Minister Ranjith Madduma Bandara, Deputy Minister of Law and Order Nalin Bandara Jayamaha and IGP Pujith Jayasundara are to visit North on Thursday to defuse the pro-LTTE mindset in the area.
Deputy Minister Jayamaha told a news conference today that he will visit North together with Minister Madduma Bandara and JGP Jayaundara to look into the recent violent incidence in the area and to defuse the pro LTTE mindset among the people in the area. “We will gather all stakeholders and will try to resolve matters,” the Deputy Minister said.
“There is only a pro LTTE mindset among the people in the area and that will be got rid of sooner or later. It will not be easy but we will do it. We will not allow the LTTE come back again,” the Deputy Minister added]

The pro-LTTE mindset cannot be diffused by external forces. At best they would be sent underground and that would result in them surfacing  as underworld activists – which was confirmed through the recent murder of Colombo Tamil Councillor not too far from where Mrs Vijakala’s husband was shot dead. One was within Hindu Siva temple and the other was new Kathiresan temple.
The common link could be calculated through the political prisoner Mr Anantha Suthaharan whose children were used by the Councillor as head of Navodaya People’s Front. Where sacred Energy is abused for lesser purposes – Siva Energy is invoked. When we seek to achieve at the policy level, any achievement at the individual level needs to kept confidential. The above attempt by Sinhalese politicians likewise, would dilute the efforts of Tamil Political Leaders – especially TNA leaders – in finding a political solution of consolidated value.
Today I was asked by a Greenpeace survey to vote against Adani (Indian) damaging the Great Barrier Reef. I said I did not know enough about it to vote one way or the other. The interviewer said that most Australians were against it. I said ‘We as Australians elected the Turnbull Government and I believe in letting them Govern’. At the end of the survey the lady asked me for a donation. I mentioned that I already donated for common needy causes – recognized by me as per my research  and hence contributed to prevention of terrorism here in Australia. If we seek to micromanage – we are really invading government space. That was the problem with Mrs Maheswaran and others. Our Truth renders the soul connection.
I dedicate this to the memory of my cousin Krishna who also became the victim of such micromanagement by militants.