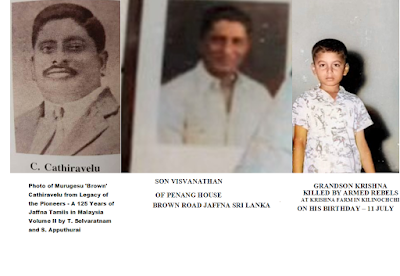 Today is Cousin Krishna’s birth anniversary. I wrote about Krishna’s family as follows on 08 October 2017:

[My father was the descendant of well-known Penang (Brown) Kathiravelu and Gate Mudaliyar Nicholas and my mother was from a much humble Samuel stock. Brown Road in Jaffna is a representation of Brown (Penang) Kathiravelu.]

The above valuation was to my mind, confirmation that my tribute to my uncle earlier yesterday, had been received by my ancestor. Belief in Ancestors is a deeply  hidden positive value. Abuse of history as if it were of heritage value is a hidden negative value. I responded to Mr. Rajasingham Jayadevan as follows:

[ My birth home was Penang House. My mother’s sister married Mr. Visvanathan. Your brother also has shared as follows:

“Penang House on Brown Road was inherited by Viswanathan a second son of Brown Kathiravelu from his second wife. The eldest in that family was ‘ Blacker’ Ponnambalam, the former MP for Killinochi. I do not yet know how the inheritance chain thereafter evolved.”

Mr. Visvanathan (known as Aiyah to us) fathered five children. The eldest Dhanalakshmi Thavasingham lives in the UK. Second  - Kathiravelu passed away this year  in Kilinochchi. Third, Ramakrishnan lives in the UK. Fourth Rathi Arulnayagam also lives in the UK. Krishna (Rathakrishnan) was butchered by the militants in 1985. I was very fond of him. Blacker Ponnambalam’s son Yoga committed suicide after Krishna died. I met his elder brother Rajan Anna in 2003 while on the UNDP project.

Do you know how you are connected to Aiya? Aiya was also a beautiful person and I think of him fondly even now. We moved from Colombo to Jaffna after the 58 riots because Aiya wanted us to.  But he had that terrible accident and got killed. My mother and Periammah became very close due to Periammah’s need thereafter.]] http://austms.blogspot.com/2017/10/gajalakshmi-paramasivam-08-october-2017.html

This family’s paternal ancestor & my great grandfather A M Pillai were blessed by Kadayit Swami (Yoga Swami’s Guru Chellappah Swami’s Guru) . Their legacies of global standards continue to empower our generation. That is real Jaffna and it stands on its own power.