Though I still have not watched this movie "Methagu" (I prefer not to), I agree with what you wrote and the feelings within!.

Given that the latter is based on my interpretation, and I know that I wrote on the basis of my truth, the identity represents the combined value of our truth, raised to the exponential value of the higher contributor. This is why in Democracy, it is important to facilitate participation by primary level investors.

Did the American group share its truth? An inquiry into their work in relation to the ethnic issue took me to the following about ‘Hindu’:

[G. Kasturi and the Eelam Issue

The tragedy of the Hindu is the tragedy of newspaper editors who allow themselves to be sucked into the decision-making processes of their governments! [Tamil Times, London, October 1988, p.12]

My verdict: Those who read the editorials presented in the Appendix can recognize that Kasturi posed as a wiseacre and his wishy-washy writing style was verbose, pretentious, repetitive, unimaginative and unrealistic to the aspirations of Eelam Tamils. Last but not the least, his written stuff was boring to read!]

The Hindu’s collection of mish-mash tributes 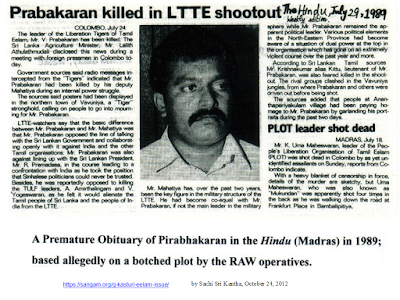 [We should not forget that it was when G.Kasturi was at the helm, that the Hindu published a premature obituary of LTTE leader Prabhakaran in July 1989. It was one of the biggest blunders in the history of Hindu’s 110 years of journalism. Those who sing elegy to Kasturi wouldn’t like this to be reminded. A responsible editor would not have permitted this sort of attention-grabbing gimmickry to adorn his newspaper’s pages, even at the insistence of nation’s gumshoes for whatever reasons. But, it did happen during Kasturi’s time!] Sachi Sri Kantha

As per my interpretation – the LTTE leader was not a hero back then and hence the ‘attitude’. The mistake through which  the Hindu was found fault with, by Sangam.org back then has happened – this time through Sangam.org publishing work in praise of Indian Tamils (through Methagu) above the interpretation of Jaffna Tamils whose interpretations were/are important in terms of Ethnic problem in Sri Lanka. In both instances hasty reporting is the reason.

The Ethnic war in Sri Lanka included India’s contribution. To my mind, it was to the ‘Common pool’ to the extent it was based on belief. Where money drove the relationship – India’s contribution went towards separation from the group that produced the sovereign group that we believed we were a part of.  The American Tamil group’s interpretation confirms their own truth in this matter. My responses confirm mine:

Alleged Declaration by LTTE leader published through Methagu – and interpreted by American Tamil Sangam and my interpretation:

Gaja: Why did you use weapons that destroy the environment – especially the Peace of the jungles

Gaja: Which part of your life taught you to kill Tamil politicians  who made the declaration of belief that they were self-governing

Gaja: Did the intellectual politician guide you to copy Armed Sinhalese who killed their leaders?

Gaja: Did you use Buddha Sasana to measure whether they were true or not? Or given that you converted to Christianity – did you measure them through the Christian Bible? If yes, why did you not turn the other cheek?

The indicator from within is as follows:

The director of the above film – Mr Kittu is reported to have been from Naam Thamilar Party in Tamil Nadu.

‘AMERICAN CONGRESS IS NAAM CONGRESS?’ which was based on the knowledge of US Congress resolution in reference to north and east of Sri Lanka as the “traditional Tamil homeland.”

Yesterday, I learnt that Tamil Sangam of America was also part  of the manifestation of  the above through its endorsement of the film Methagu.

Is Methagu getting the Sri Lankan Tamil ready for another war – this time against Chinese troops also?