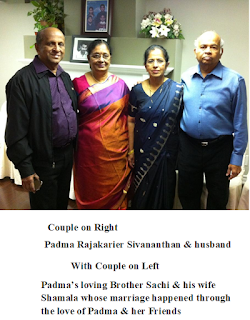 This morning I wrote the following in honour of my dear friend and relative in law Padma Rajakarier Sivananthan who left her mortal coil last morning:

[Thank you so very much Malar. I also have been reminiscing and going into virtual reality of our experiences at young age. In my case especially, this culminated in the marriage of my sister to Padma’s brother Sachi. Sachi in turn was all our brother, made more attractive by his Singapore flare and impeccable manners. You Padma and I were studying law – particularly Uppuma Fide/Uberrima Fidei – when Padma mentioned that Sachi was due to arrive soon. It was you who then asked whether they would arrange marriage for him. Padma was always a cheerful soul. I feel happiest going into that virtual reality with Padma and you. Our turns would come soon and I want to leave similar pathways open to others to whom I meant something. I thank the Padma in you for making this sharing possible.

(We remembered Uberrima as Uppuma – a semolina based dish)

The truth in our experiences, when realized makes it possible for us to go into those as virtual realities. Painful experiences are without anxiety in the virtual reality mode. They render sad comfort.

My attention was drawn this morning to the following report by Adaderana:

[Nearly 150 death-row inmates held at Mahara and Welikada prisons are currently engaged in a hunger strike.

They are demanding the authorities to commute their death sentences to life imprisonment, reports revealed.

A group of 70 inmates at Mahara Prison had launched an indefinite fast-unto-death on Thursday (June 24) and following suit, a group of inmates at Welikada Prison had also commenced a hunger strike later in the day.

According to reports, the security at Welikada Prison has been beefed up.]

The current President is reported to be committed to improving villages. In democracy, this requires the President to think like the villager – even though s/he may be a criminal.

On the same day the above strike started, Mr Duminda Silva was released:

[Former MP Duminda Silva was sentenced to death along with four others in 2016 for shooting dead a rival politician and three of his supporters in 2011.

Mr Silva, who was a political ally of Mr Rajapaksa, is among 94 prisoners to be given a presidential pardon.] BBC

If the President were truly a political friend of Mr Duminda Silva and was genuinely committed to the common villager, he would have released all death sentence prisoners or continued to keep Mr Duminda Silva in prison, confirming Uberrima Fidei/Utmost good faith in their friendship even though the friend is in prison.

By pardoning his friend and not the villagers the President has seriously weakened his Governance power and that of the position of President. Had the President not pardoned him but spent considerable time with the friend in prison, he would have been seen as a just leader – deserving of the status of Buddha’s disciple. He had that duty on Poya day – a Buddhist religious day when a true follower of Buddhism would have heightened consciousness of Dharma which in essence is Faith based governance / Rule as per Uberrima Fidei.

If all were released then that effectively dismisses the work by the Judiciary and confirms that we are overregulated.

By mixing the two systems – the President is contributing to the higher risk of mental disorder – following in the footsteps of his predecessor who was caught between two opposing political parties and hence failed to uphold the law.

Ultimately, we develop our own karma and to the extent we are part of a community – our individual karma is shared with that community. The President would have realised this if he had gone into meditation as per Buddhism Foremost article (9) in our constitution. Effectively, the President has repealed Article 9 on Poson Poya  - the anniversary of the arrival of Buddhism in Sri Lanka.