[Gaja could you kindly say what you are trying to say in brief and in an understandable language. Effective communication is the high pathway to get connected for us to understand as equals.]

As per my understanding – the above leader speaks for the Common Jaffna Tamil in that group. As an individual his approach would have been more open to logic that his scientific mind would understand. But the above is the easier path for social purposes.

In contrast, Dr Subramanyam Chandrasekharan who was ‘Additional Secretary, Cabinet Secretariat (RAW) and was in charge of India’s Sri Lanka operations for many years’ wrote as follows:

[I recall another saying of blog by Gajalakshmi Paramasivam who said - I quote “Once we are true to ourselves - Truth does the rest”.  But will Xi Jinping and his CCP come out with the truth ever about the pandemic that has led to immense  loss of a million lives and we are still counting?] SAAG article ‘Corona Virus (Wuhan) and the Chinese Hypocrisy’

The difference between the two ‘attitudes’ is the level of investment that one makes in one’s home-environment. If Jaffna is that environment – then one needs to lose consciousness of time and connect to the oldest mind in that environment. This to me was mine due to my respect for elders from the time of Thesawalamai Law particular to Jaffna Tamils. As Dr Subramanyam Chandrasekharan has stated – my way is to be driven by my own truth. My response was :

[You must understand some parts. Others who respond understand other parts. A few identify with the roots. Even if you do not understand my contribution – but do understand others quoted – including the US Congress – then there is some value. Beyond that it is just keeping the line of communication, going within the community]

In the global context, I identify with Gen Gallage who was declined visa to enter Australia ( on the basis of war-crimes allegations) whose interpretation has been published by the Island through article ‘ Chagie picks holes in controversial US resolution’:

[Gen. Gallage dismissed much repeated public assertion the US policy had been influenced by the Tamil Diaspora. The outspoken retired officer said that the latest US resolution should be carefully examined against the backdrop of Sri Lanka-China partnership culminating with the Colombo Port City Economic Commission as well as collapsing of talks on MCC (Millennium Challenge Corporation) Compact and SOFA (Status of Forces Agreement) though ACSA (Access and Cross-Servicing Agreement) finalized in Aug 2017 remains intact.]

Australia would have rejected visa to Gen. Gallage also to tow the line with American Government. These are all kept in reserve when they have the big wars in small countries. The question is why Tamil Politicians failed to express similar belief. Is the clue in the Indian Cultural Hall in Jaffna Town that was recently completed ?

I first heard about the Hall, when I stayed at Jetwing Hotel Jaffna. From time to time I observed workers there but did not know how it was going to shape up. Locals also were curious. Then yesterday, my attention was directed to the report about the newly completed hall at https://www.youtube.com/watch?v=9_HUiyhGwRY. I was happy to note that while I was here in Sydney – unable to go to Jaffna due to Covid – that hall had been completed. It may be Dr Subramanyam Chandrasekharan’s spirit in me, sharing his wisdom in the issue.

My attention was promoted to Colombo Telegraph article  which included the following: 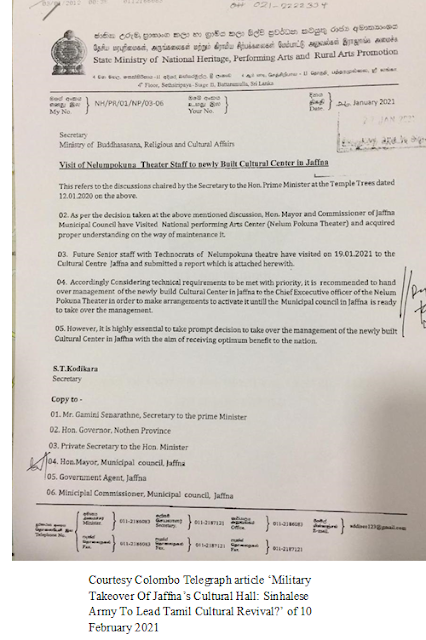 One wonders as to whether there is some connection between the above and the charges brought against Mr Visvalingam Manivannan who was reported to have become Mayor of Jaffna on 30 December 2020. One report stated that it was through EPDP – which is a Tamil party in partnership with the government. The above memorandum was released on 26 January 2021. On 09 April 2021, Manivannan was reported to have been arrested. Daily News of 09 April reported as follows:

[Jaffna Mayor V. Manivannan has been released on bail by the Jaffna Magistrate’s Court.

He was arrested this morning under the Prevention of Terrorism Act (PTA) after he had deployed a new unit clad in uniform similar to the one worn by the LTTE “police unit” during the war.]

Yesterday, Manivannan was part of the presentation mentioned above – of the Indian Cultural Hall in Jaffna. He mentioned that the Municipal Council has already recruited the personnel needed to Administer the Hall. He said also that he was liaising with the Indian authorities concerned in this regard.  Why is this different to Colombo Port City under China? Makes one wonder whether he is Karuna Amman in the making?

Both Manivannan and Mr Wigneswaran have been advised of my book Naan Australian which was appreciated by a few including Dr Subramanyam Chandrasekharan. A true Jaffna Tamil would have demonstrated preference to a Jaffna Tamil above foreigners.

[In 1993, China’s biggest airline, state-owned China Southern Airlines, paid the Western Australian government $1 to lease Merredin airport for 100 years to use as a training school for its pilots.

The rural airport, 260km east of Perth, only had two gravel airstrips – but after Chinese investment is now a multimillion-dollar all-weather airfield providing jobs in the region.

However, experts have raised concerns about letting a foreign government control airspace in Australia.

Local pilots say they have never been turned down when they request to land – but in theory China Southern could stop them using the airport at any time.]

Australia plays the big game, relative to Sri Lanka. The Tamil Diaspora as well as the Sri Lankan media may blind themselves to the trade wars in wider world. Makes one wonder whether the LTTE was part of such a takeover by India? But whoever is disrespectful of genuine owners driven by belief would become isolated. The Covid virus has confirmed this in the case of both – China as well as India.