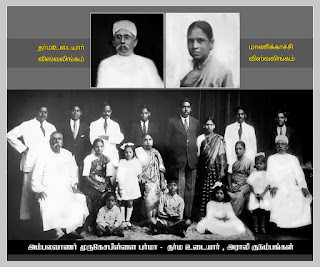 Today we Hindus celebrate Mother Saraswathi – goddess of Education. I inherited belief in that philosophy from my mother who grew up in Burma and therefore was strongly influenced by Indian Hindu culture. My father grew up in Northern Sri Lanka and was influenced by Jaffna Tamil culture. Between the two cultures - Indian culture celebrated Saraswathi poojah more elaborately than Jaffna  culture. We as a family became multicultural and merged both cultures at home. The picture above confirms that merger through marriage of my father’s sister to my mother’s uncle from Burma. To the extent I invoke through my belief, I feel their Energy. In our office in Vaddukoddai where we have this picture, it is my belief that I invoke the combined power which is regional family power. At the temple in Thunaivi-Sangarathai – I believe I invoke traditional local power as per my father’s side.

These passages are important in developing structures through which the folks of an area would mind-merge.

Today, I was directed to Capital TV’s interview with Mr Sugash Kanagaratnam – a lawyer politician whose office is on the way to  our office from our temple. https://www.youtube.com/watch?v=izWAuew5Xag&feature=youtu.be . Politically speaking we could say that the temple is in the area where majority support Mr Douglas Devananda who is a coalition partner of  Mr Mahinda Rajapaksa and our office is in Vaddukoddai which in TNA area and carries the spirit of the Hon Appapillai Amithalingam – under whose leadership Vaddukoddai Resolution happened and led Tamils to political victory in the 1977 elections. Mr Sugash Kanagaratnam confesses to inheriting the mandate of the LTTE which killed the Hon Appapillai Amithalingam and downgraded Nationalism as declared through Vaddukoddai Resolution to Separatism promoted through armed power. That is to aim Vaddukoddai to become like Thunaivi – in which area I have never seen Mr Sugash Kanagaratnam and to which area the ‘family’ of Mr Sugash Kanagaratnam mentioned below never came even to participate in the opening of the Development Secretariat on our temple land donated to the public.

I met Mr Sugash Kanagaratnam when we needed a lawyer when the High Court of Jaffna while accepting my appeal application in the testamentary matter required me to restructure it to suit the local practices. I asked a friend - Mr Sam Hensman and he  recommended Mr Sugash Kanagaratnam. As is my way, I took my turn in the long queue  to see Mr Sugash Kanagaratnam in his office. He was quite courteous and receptive but excused himself on the basis that he was related to our opposition. That opposition was made up by my husband’s sister and brother in law. The Sinhalese parallel of that would be the claim of Mr Mahinda Rajapaksa excusing himself because the  opposition is his wife’s relative in parliament. Mr Sugash Kanagaratnam recommended Mr Visvalingam Manivannan whose focus was strongly diluted by his political distraction, especially during the time Miss Vithiya Sivaloganathan’s rape and murder case was being heard in the Jaffna Courts. I believe that we lost the appeal due to lack of mind merger between client and lawyer which in turn connects to the judge. Mr Yogendara - the other side lawyer from Colombo was not so distracted and prepared his submissions in a way that was easy for the judge to copy. As per my discovery – this is the sorry state of affairs of  Jaffna judiciary – which in spirit includes the mind of Mr Wigneswaran who is an extreme example of the breach of the Doctrine of Separation of Powers between the Government and the Judiciary followed by religion and politics. He effectively copied Buddhist leaders.

Our NSW Parliament presents the root of this doctrine as follows:

[In his Second Treatise of Civil Government, English philosopher John Locke (1632-1704) noted the temptations to corruption that exist where “... the same persons who have the powers of making laws to have also in their hands the power to execute them ”]

Today when I watched the above program presented by Capital TV I felt the alienation by Vaddukoddai Tamil lawyer from this policy. It is that much more important that groups that claim two nations one country appreciate this Doctrine as if it is part of their very being. Mr Sugash Kanagaratnam who claimed that they were developing pan-nationalism needs to appreciate that Tamils within the Diaspora who practice democracy and therefore the Separation of powers between diverse cultures, would lead this development of pan-nationalism. If the local politicians who did not appreciate the value of the Doctrine of Separation of Powers led the development – we would end up with separatism. The Capital TV’s ‘The Politician’ program’s presenter was clever and brought out this truth about Mr Sugash Kanagaratnam through this program. One of the questions he asked was about the genuineness of the oath taken as a lawyer – which includes acceptance of punishment to any  claim of separate state (6th Amendment to the constitution) – by a politician who claims that the goal of LTTE separate country and that of his party were the same. One who is committed to pan-nationalism would have transcended separatism.  The program confirmed to me that which I already knew through my direct experience with Mr Sugash Kanagaratnam who has become bi-polar between lawyer and politician but without the separating space needed to be true to each profession independent of the other. This is an essential criterion to determine pan-nationalism.

Mr Kaviyalagan another young Tamil journalist in the Tamil Diaspora clarified that the Navarathri function at the centre of my yesterday’s article was actually conducted at Mr Mahinda Rajapaksa’s home (https://www.youtube.com/watch?v=VGAceouSs4M ) and not at the temple as claimed by Yoga Joseph who forwarded it to me under the title ‘MAHINDA RAJAPAKSA AT NAVARATHIRI PRAYERS IN TEMPLE’. But Kaviyalagan made false presentation that the head of Siva Senai Mr Sachchithananthan was Indian. I met Mr Sachchithananthan through my articles and later in person when he introduced himself to me at the Jetwing Jaffna foyer. We have common interests in Hinduism including through Thiruketheeswaram temple.  Maravanpulavu is in Northern Sri Lanka and yet Kaviyalagan failed to focus on the facts but distorted them towards his presentation about Indian influence in Sri Lanka. Wikipedia confirms the following about Mr Sachchithananthan:

[Siva Senai is a political group in Sri Lanka formed to protect the interests of Sri Lankan Tamil Hindus formed in October 2016. Maravanpulavu Sachchithananthan, a former United Nations official is the founder of the group, which has received encouragement from the Indian political party Shiv Sena.[2] Siva Senai spearheaded an initiative in December 2017 to allow Sri Lankan pilgrims to visit Chidambaram in Tamil Nadu, India. The group has also actively advocated against cattle slaughter in Sri Lanka.

In 2018, supporters of Siva Senai held protest in Jaffna against cattle slaughter]

Kaviyalagan goes on to present the picture that India is influencing the formation of Hindu nationalism as opposed to Tamil nationalism and indicates that as the reason why Mr Rajapaksa and other Buddhist politicians visit Hindu temples. Kaviyalagan claims it as a political strategy. Each one is entitled to form her/his picture and so long as it is based on belief it qualifies  to be presented to public without going through checks and balances. Hence Universal Franchise of democratic vote as opposed to ‘appointments’ which need to go through ‘checks and balances’ as per stated criteria. To present what happened as a fact beyond one’s belief,  one needs the checks and balances that satisfies the intellect. This is the reason why the Separation of Powers between the Judiciary and the Elected government is required. The latter is entitled to express to its electorate on the basis of belief. The Judiciary needs to believe in the law but apply the checks and balances to ensure that ‘facts’ presented are true and relevant. Likewise, the local Tamil population in Sri Lanka is entitled to express as per its belief when sharing locally. When the audience is global, it needs checks and balances to the extent of the diversity in cultures.

When we mind merge through Hindu belief – that alienates non-Hindus. The Jaffna culture that I grew up in and supported me in my global experiences is very much multi-religious. The founding education that Mr Sugash Kanagaratnam received is from Jaffna College which was established and resourced largely by Christians. Multi-religious structures are part of Jaffna fabric and it would be wrong to promote Hindu-nationalism as highlighted by Kaviyalagan. We have fought on the basis of Common Tamil culture – which includes multi-religious fabric. It has facilitated us to integrate with other cultures – especially Christian cultures in our new nations. If that is also the basis of merger with Sinhalese – I welcome that as a true Sri Lankan.