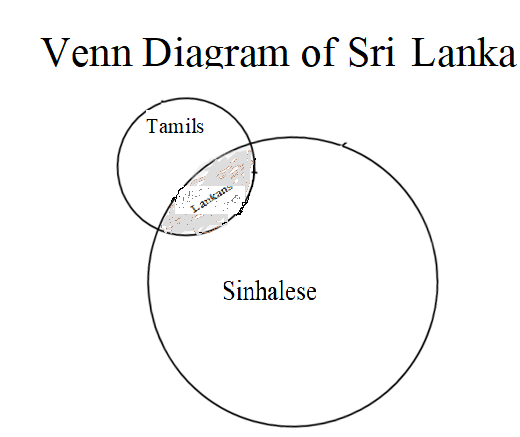 “Like POLLS repel the system, but very unlikely the successors of JRJ who vowed to repeal it, never did it;  Instead strengthened it. The question of voters right the franchise or frank choice is like a Frankenstein monster and remain the same, the centre retains its power base?” Australian Tamil Intellectual leader in a forum of Common Lankans.

Are Sri Lankans being Engineered more and more to become ethnically polarized? Is this a continuation of Bipolar Language system   that SWRD Bandaranaike tried to implement which   his widow converted to ‘Buddhism foremost’ in the Constitution?      Has this finally evolved   through the Quota / Standardization system to Preferential Voting system which makes some of us stateless?

Wikipedia introduces us to the subject background as follows:

Under the British, English was the state language and consequently greatly benefited English speakers. However the majority of Sri Lankan populace lived outside urban areas and did not belong to the social elite, and therefore did not enjoy the benefits of English-medium education. The issue was compounded further by the fact that in Northern and Eastern regions of the island, where a largely Tamil populace resided, students had access to English-medium education through missionary schools regardless of their socio-economy strata. This created a situation where a large proportion of students enrolled in universities throughout the country were English speaking Tamils and Sinhalese from urban centers like Colombo, particularly in professional courses such as medicine and engineering.

The effect of the law

In 1969, the Northern Province, which was largely populated by Tamils and comprised 7% of the population of the country, provided 27.5 percent of the entrants to science-based courses in Sri Lankan universities. By 1974, this was reduced to 7%. However, the hardest hit population group were the urban Tamils and Sinhalese in the Western Province, which contained 26% of the islands population. In 1969, the Western Province provided 67.5 percent of admissions to science-based courses. This reduced to 27% in 1974, after the law came into effect.

The net effect of the above was the shrinking of Common Urban population in Jaffna and in Colombo. One such member of the Common area wrote in relation to the group that gathered at the home of Mr V Manivannan who did not make it to National Parliament:

[Why don’t these fellows get together and plough the fields.  Thamilan  Emancipation  or castration or destruction? ]

My response was as follows:

[As you sow, so shall you reap. Manivannan represented us at the High Court in the Thesawalamai matter. He absented himself many times including when there were harthaals. But I went for all sessions and on one occasion when as per Parathalingam’s command, Judge Elanchellian said that he would dismiss our appeal because Manivannan was not there – I stood up and said that I prepared the Appeal Application and I was ready to argue the case. The Judge smiled and said to inform our lawyer about the next date. We won that round. Manivannan continued to represent us and we were failed despite strong evidence. But Manivannan did not bother to sit down and analyse it with us after judgment. I prepared the Leave to Appeal to the Supreme Court but felt that it was unfair to the heirs if the matter dragged on for years and years in Colombo – as happened with my Colombo Land case in which Parathalingam represented us initially. I terminated his services when he appeared without any intimation to us – for the opposition in the Jaffna matter. I did the arguments in the Colombo Courts which were given the legal flare by Harsha Fernando and Revan Weerainghe. During the Jaffna matter instead of being with me – Manivannan would go over and speak to Parathalingam and Yogendra. If he had been elected he would have promoted himself. He lacks ethics to stay focused.]

The wider the area covered by the Common urban group – the stronger the unity. Otherwise the two groups would separate like planets with two different solar systems. China is Sinhalese’s  Sun and India is Tamils’ sun and the UN is the common Lankan’s sun.

Given that that damage to the Sovereignty of the whole was NOT repaired within the due date, the residual negative value settled down as Lankan Government’s karma. This was awoken by President JR Jayawardene (JRJ) who was part of the ‘urban’ group but due to conversion to Buddhism became rural . JRJ used the more sophisticated language of Preferential voting without belief in it and ended up defeating the Sinhala Only policy of SWRD Bandaranaike with India under the leadership of the Hon Rajiv Gandhi as the Sun. This also brought out the real heritage of JRJ and restored English as the link language through the 13th Amendment. This 13th Amendment to the Constitution has provided for Provincial governance but the structure is idle because the rural folks both Tamils and Sinhalese lack wisdom in Common Public Administration. As indicated by the Australian Tamil above – they are artificial versions of local customs.

I responded to the above as follows to the Constitutional changes:

[There are two planets / circles here finally born after 1983 . The cause was not only the two constitutions – 1972 and 1978 but also Vaddukoddai Resolution without appropriate protection. Most of us – the so called educated Lankans are in the intersection of the two circles. We are taken as ‘show’ by each side. Ali Sabry is the latest example. All of us carry that risk until we declare that we are part of the Common and should not be double counted. Probability of an outcome can be projected through grouping the members of a culture into one circle – say Sinhalese who live in Sinhala only areas. Likewise circle B which is Tamil area. We belong in both and therefore in the Intersection. English in Sri Lanka is called the Link language. Those in this section would not be able to ‘show’ that they produced a particular outcome through physical majority. But we are able to influence both sides through issues that are important to us. It is our circle that would connect to wider world. That is how we brought India to Oppose China with the help of Silk Road heritage which is a Universal power.  In that common area we can either guess and gamble with or project as per probability theory. Param says that this is covered by Venn Diagram]

In law also we have the Balance of Probability rule in civil matters. That is based on belief which connects us to the Universal Franchise of law. When applied by a judge who does not have belief in law, but uses biological and/or community influences, the verdict contributes towards separate circles without links to wider world or to each other.

Mr Manivannan failed to demonstrate belief in Thesawalamai law in the testamentary case before the Civil Appellate High Court of Jaffna. Given that he contested on ‘Nationalism’ ticket he needed to breathe Thesawalamai law as his oxygen. When we were failed – that Nationalism claim failed – not only for him but the whole group – of AITC headed by Gajendrakumar Ponnambalam, who in addition to being a lawyer also claims to be a Tamil Nationalist. Tamil Nationalists in Jaffna have to have wisdom in the fundamentals of Thesawalamai law  which majority in Jaffna naturally practice in terms of marriage and heritage-rights.

University of Jaffna was the trade-off for the Quota system. We acquired the separatism genes back then and with it the lower standards in education and common culture. Now this government would do likewise if it withdraws from the commitment to Common global Culture in Defending National Sovereignty.

Gambling with votes as some did try - including through the failure of Ms Raviraj who was backed by Separatists like Mr Sivajilingam and Ms Ananthi Sasitharan – amounts to plagiarism in Education.

There is a Hindu Tamil poem which goes as follows as per my knowledge inherited from VADDUKODDAI:

Even if all the rivers produce rich gems

That which is meant for us is

As per the Lord of Divine Dance

Even if you go in search and enter the treasure-house

Will you get otherwise Oh King of Kings!

The underpinning story  is that a poor poet who desired the treasure  in the coffers was allowed by the king to choose one from three covered pots filled with gold, gems and bran respectively . The poet  picked the one with bran. Then he rendered the above. Wisdom and not money is the wealth if poets.

Sinhalese may be attracted to China-money; Tamils to Diaspora money; but as per the Lord’s system,  farmers without belief  will get bran which is better than the plagiarized Preferential Voting system through which mercenaries would who previously ‘bought’ votes would now use Artificial Intelligence to engineer the pawns.