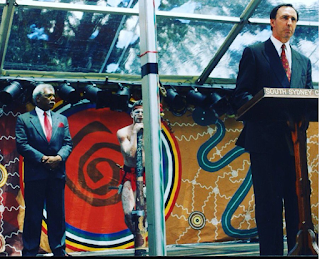 We often habitually refer to ourselves as per common understanding in our respective current environments. Those who live as part of Tamil community  with little knowledge of the outside world would have no reason to describe themselves as Tamils – be it as Sri Lankan Tamils, Eelam Tamils or as Batticaloa Tamils or as Hill country Tamils. The distinction is made largely by those who ‘fear’ loss of identity.

The Tamil Community of Sri Lanka is made up of various sub-communities. Indigenous Tamils are also one such group. Daily Mirror editorial on this subject matter includes the following:

[The UN says, indigenous people have sought recognition of their identities, way of life and their right to traditional lands, territories and natural resources for years, yet throughout history their rights have often been violated. Indigenous people today, are arguably among the most disadvantaged and vulnerable groups of people in the world. The international community now recognizes that special measures are required to protect their rights and maintain their distinct cultures and way of life. The 2018 Theme is ‘Indigenous people’s migration and movement’. As a result of loss of their lands, territories and resources due to development and other pressures, many indigenous people migrate to urban areas in search of better prospects of life, education and employment. Additionally, indigenous migrants face a myriad of challenges, including lack of access to public services and additional layers of discrimination, the UN says. ]

As a global Tamil, I carry the spirit of Jaffna with me. Likewise, the spirit of Sri Lanka. Structurally, I have the DUTY to express my Sovereignty in global terminology. Those who are unable to so express as individuals often form community groupings. These groups have the responsibility to express through global structures and language and not as per the current version of their origin.

[We non-Aboriginal Australians should perhaps remind ourselves that Australia once reached out for us. Didn't Australia provide opportunity and care for the dispossessed Irish? The poor of Britain? The refugees from war and famine and persecution in the countries of Europe and Asia?] The Hon Paul Keating – in his Redfern Speech in 1992 – the year for the World's Indigenous People.

The beauty of the above is the Consolidated form – ‘Australia’. When I recently provided advice in legal structure in Jaffna – I said to the person that I was doing it for Jaffna and the University of Jaffna. Despite the insults in Mallakam District Court in Northern Province of Sri Lanka, I paid my respects to the Law of Thesawalamai – which confirms the Sovereignty of those indigenous to Northern Sri Lanka. Yesterday, I was pleasantly surprised when an officer at Mallakam District Court Registry narrated to me the course they were following in terms of my brother in law’s Testamentary matter. Even our lawyer Mr Manivannan who is actively representing the Eelam Tamil cause in Geneva – lacked the wisdom that this Registrar demonstrated. The fact highlighted by us to the lawyers was that as per the Sri Lankan Civil Procedure Code, certificates of Heirship cannot be issued without consent from all heirs. This then requires Administration – which we applied for but were denied – including by Judge Ilancheliyan who heard the appeal. But indigenous part of Mallakam court – delivered. THAT is the value of Sovereignty.

Diaspora Tamils who fail to include indigenous Tamils as an intrinsic part of themselves but rather try to lead by showing off – are developing dependents. If they are dependent on outcomes produced by others – then they lack the capability to develop independents. Recently an Australian Tamil professional who is highly recognized in the Community complained that the current Administrators of his alma mater would not take advice from him and that all they want is the money. This is common to many institutions including the University of Jaffna.

Tamil net reports as follows under the heading ‘Coningham discovers Jaffna as premillennial maritime trade centre, but at which price?’ :

[Editor's note: Although the transcription is largely accurate, there could be inaccuracies due to inaudible speech/recording. Readers are urged to verify the details with the author before using the current version as a reference]
First of all, in my capacity as the chairperson of this pleasant event, I would like to emphasise the significance of the Fort archaeological studies.
Under the Jaffna Fort Post-disaster Archaeological Project, archaeological studies were carried out during the period from 25th June to 20th July 2017, and 1st July to 27 July 2018.
These studies were headed by Professor Robin Coningham Department of Archaeology, Durham University, UK, in collaboration with Central Cultural Fund, Government of Sri Lanka and Archaeology Unit, Faculty of Arts, University of Jaffna.
The financial assistance to conduct these studies was provided by the British Academy, the Central Cultural Fund, Government of Sri Lanka, and the Institute of Medieval and Early Modern Studies, Durham University.}

One does not find any Tamil Diaspora Group funding the above. Could it be because the current University Administrators want the Funds but not the intelligence of the Tamil Diaspora groups?

As I said recently to an Australian Tamil who seemed to have difficulty overriding his elders in the indigenous culture – when we juniors pay our respects to the elders in our indigenous structures we complete our relationship. Any monies paid thereafter needs to be towards satisfying our needs which would also be their needs. Any more than that amounts to reverse Administration which many members of the Tamil Diaspora practice . As per my observations that is because they plagiarize foreign governments that ‘buy’ power.

Even nations in Europe have their own indigenous communities. Non-Indigenous Australians often try to – ‘buy’ status without feeling ownership. The likes of the Hon Paul Keating – through whom we connect to Common Australia – are blessed by the Sovereign Spirit of Australia.  Once we are Sovereign in our current environment,  we would naturally include our indigenous origins in all our work and structures. We thus empower each other.