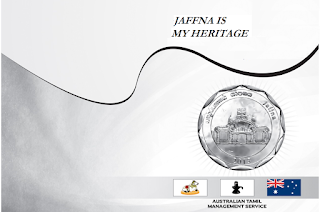 They say that ‘behind every successful man there stands a woman’.  In Hinduism we call such a woman Shakthi / Energy. Taking one individual, one half of the individual needs to be Shakthi to support great achievement by the other half. In terms of a Nation – where majority are the face of great achievement minorities need to be  recognize as Equals. Hence Equal position for a minority power that is self-sufficient, through Opposition position in Parliament. Following is an excerpt from my book:

[Vaddukoddai (pronounced Vattukottai) being the birthplace of Vaddukoddai Resolution 1976, about which a popular Tamil website  reports as follows:

[The first National Convention of the Tamil United Liberation Front meeting at Pannakam (Vaddukoddai Constituency) on the 14th day of May, 1976, hereby declares that the Tamils of Ceylon by virtue of their great language, their religions, their separate culture and heritage, their history of independent existence as a separate state over a distinct territory for several centuries till they were conquered by the armed might of the European invaders and above all by their will to exist as a separate entity ruling themselves in their own territory, are a nation distinct and apart from Sinhalese and this Convention announces to the world that the Republican Constitution of 1972 has made the Tamils a slave nation ruled by the new colonial masters, the Sinhalese ,who are using the power they have wrongly usurped to deprive the Tamil Nation of its territory, language citizenship, economic life, opportunities of employment and education, thereby destroying all the attributes of nationhood of the Tamil people.] as published by  www.sangam.org

To my mind, the above was a political declaration on the basis of the core purpose  of establishing a Separate State within the Nation of Sri Lanka, similar to Quebec Province in Canada. If there are no firm and continuous  boundaries – the ‘Nation’ is abstract and has no particular ‘State’. It is rather a State of Mind. Given that it was made by Tamil United Liberation Front (TULF), one is entitled to conclude that it covered the areas represented by TULF.

In the National Parliamentary  Elections that followed in 1977, TULF became the leading Opposition in National Parliament. Within the TULF, the highest percentage of votes was polled by the Hon Murugesu Sivasithamparam  in the Nallur district. To my mind that outcome confirmed not only the self-governing heritage of Nallur – where God of Democracy – Murugan - is strongly worshipped, but also the investment made by the class represented by the Hon Murugesu Sivasithamparam  who was Deputy Speaker of the House of Representatives of Ceylon when the Hon Dudley Senanayake was Prime Minister, raised the investment of all to whom Northern Province is home, to the National level.  With that kind of combination, Northern Province will always be self-governing. One does not need anyone else to endorse it. Nor does one need to shrink it through Separatism.  One who seeks to separate confirms lower mind.

Belief is expressed by different persons and groups in diverse forms. Mine in Jaffna is depicted through the above picture. The above resolution was interpreted by armed militants in a different form to the politicians who gave birth to it. It’s like the dual-citizenship issue currently (2018) being faced by the Australian Parliament. The depth of our investment in an issue determines the strength of the base of our reception.

When Tamils became the Equal Opposition in Parliament in 1977, to my mind, that manifestation upheld the Political form as expressed by Tamil Politicians. Such manifestation despite Tamils being a minority group as per headcount, confirmed to me that Tamils were supported by Natural forces. It confirmed also the need for us to make declarations of belief to earn such support from that land itself. ]

Where Sri Lankan Muslims believed in burial of the dead AND they declared it in their home environments, the Buddhist government has the natural right to oppose it but not override it. Only a secular government common to both has the authority to make laws on common basis and use them on equal footing.

As per Ceylon Today report headed ‘Preserve the bodies of 11 Mahara prisoners including 9 COVID-19 positive: Motion filed in Court’:

[A motion was filed before the Wattala/Welisara Magistrate’s Court yesterday (2) in connection with the deaths of 11 prisoners at the Mahara Prison on 29 November, requesting Court to ensure criminal justice by preserving the physical evidence from being destroyed, especially the bodies of the dead including those of the nine who were found COVID-19 positive. The motion was filed by Chairman of the Committee for Protecting the Rights of Prisoners, Attorney-at-Law Senaka Perera, and Attorney-at-Law Namal Rajapaksha made submissions before Wattala/Welisara Magistrate Buddhika C. Ragala. The hearing related to the inquest is to be taken up again tomorrow (04). ]

The question needs to be asked as to whether Muslims whose belief was forcibly overridden by a Buddhist government were released from the bondage to the government and therefore their belief-based practices became free to join the Universal Energy. Universal Energy transcends time and place boundaries to support or oppose of its own free will.  Coronavirus is such a King who acts independently. It is a natural opponent of good health.

The current Sri Lankan government claimed credit for taming this virus, using its Armed Forces who have little belief in the theory of Medical science.  So it came back in the form of thuggery within the prison system. Isolation & Confinement to a particular place leads to that place becoming a place where natural energies would be freely manifested. The Muslim Energy, free of  government control and free of current Muslims who lacked belief, joined forces with Sinhalese who lacked belief in their government.

It will be interesting to see how Wattala/Welisara Magistrate’s Court would rule in this instance. Muslims have been part of the minority force that empowered every successful government of Sri Lanka. When they are punished unjustly, Sri Lanka becomes an ungrateful county and loses its sovereignty unless it self-demotes to the Buddhism only level.