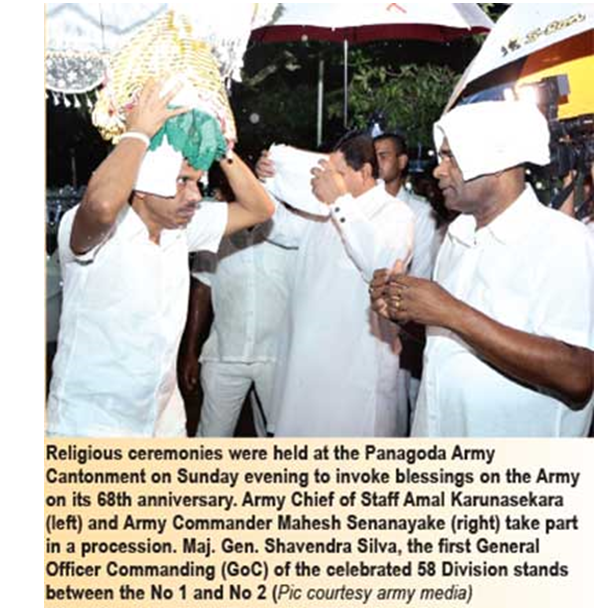 [In addition to those who had commanded fighting formations, war winning Army Chief the then Lt. Gen. Sarath Fonseka was repeatedly denied a US visa. Last month US deprived Field Marshal Fonseka an opportunity to join government delegation to UNGA.

Australia recently denied Maj. Gen. Chagi Gallage a visa for commanding 59 Division towards the end of its mission.] Island report - ‘War crimes charges made against troops unfairly’
There is a saying in Tamil – ‘ Arasan Andru Aruppaan; Theivam Nindru Arukkum. (The Ruler punishes immediately; the Lord punishes cumulatively).  The English parallel to my mind, is – ‘Millstones of the gods grind late, but they grind fine.’

When we say the Lord, it is us – the Truth within us. It may take time for the Truth to face Truth but it happens. Greek Philosopher Celsus is reported to have stated ‘The mills of the gods grind slowly', even 'To children's children, and to those who are born after them.’ We Hindus call it Karma. Many Hindus perform good deeds to dilute and neutralize the negative effects of past life. Where we fail to rectify wrongs within current period, they become sins. Such sins make us heirs of the ancestors carrying stronger sins. Hence soldiers who failed to follow the Common law against Terrorists / Criminals could be born as relatives of those very Terrorists / Criminals in their next life.

Where one is not able to follow the law for whatever reason, one is safest by acting as per one’s Truth. Those who are driven by desire, would tend to use their own system to win. If Sri Lankan soldiers acted as per the orders of their commanders and those commanders did not use the rules of war nor their personal Truth – they would lower their thinking and their minds become disorderly. This happened in the case of militants as well as military.
Tamils who suffered most due to the war and who became law abiding citizens in their new nations have the power to punish through their new Governments. Likewise Sinhalese who are law abiding citizens in their new ‘home’ nations – have the power to influence their new Governments to reward those who are heroes in their mother nation.

The above mentioned rejections by the Australian and American Governments confirm that at the global level, the Tamil victims’ power is stronger than Sinhalese hero power. I wrote recently in this regard:

[When ordinary Sinhalese held victory parades on the streets of majority Tamil suburbs in Colombo, after the 2009 declaration of victory over the LTTE, by the Rajapaksa regime, I heard some young Tamils who identified with the militants – say that such celebrations  would  pave the way for many more Prabhakarans to be surfaced. Prabhakaran would,   by belief reproduce himself exponentially,  due to the Soul value of his work. Likewise, those who already had developed bridges with other communities , including with the Sinhalese through other activities – especially Higher Education related activities.  Prabhakaran ‘s make up could be discerned from the following excerpt from the ‘Time Magazine’  article ‘Prabhakaran: The Life and Death of a Tiger’, published on 19 May 2009 :
["My childhood was spent in the small circle of a lonely, quiet house," he said in a 1994 interview. He described a deep-seated anger against the military and remembered an eighth-grade teacher who exhorted students to take up arms against it. "It is he who impressed on me the need for armed struggle and persuaded me to put my trust in it," Prabhakaran said. Jaffna was then considered the heart of Tamil culture and literature in Sri Lanka, and also the center of the growing Tamil nationalist movement, which called for greater autonomy for Tamil-majority areas to protest what they considered discrimination against Tamils by Sri Lanka's Sinhala-speaking majority. The most radical groups wanted complete independence and struck out at symbols of the Sri Lankan state, including fellow Tamils whom they considered collaborators.’]
The militants led by those who killed politicians – especially well educated politicians, would naturally produce those driven more by brawn power than by higher mind order. We reproduce exponentially our own true heirs. That to me is Soul power. ]

The Tamil Community also needs to clean itself – especially of the wrongs by militants as per the Common Law of the Tamil Community taken as a whole. Then and then only would our heritage have positive value to our heirs/ children and their children for generations to come.