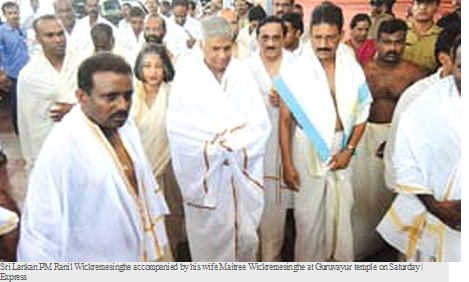 It was irritating to note the headlines ‘Do The Jaffna Tamils Have A Culture?’ I noted that the author was Mr. H. L. D. Mahindapala – who as per my knowledge is Australian by law. I decided to ‘dismiss’ the article from my attention. But about a day later – I received communication from a valued Diaspora Leader and decided to respond to the article. My mind was refreshed by the Divine message from a dear friend – definitely a Jaffna Tamil – that ‘nothing happens without a reason’. The ethnic war in Sri Lanka was meant to happen – due also to such irresponsible statements. But Mr. Mahindapala being himself – could not have made a more positive contribution.

So let’s work backwards from the outcome/effect to the cause. What kind of personality does Mr. Mahindapala reveal? Let’s use our Common Australian culture through which to analyze Mr. Mahindapala who is not alone in his structure of who Jaffna Tamils are?

‘Like the Aborigines of Australia, for instance, a closed society stagnates while an open society flourishes with the new and invigorating input of outsiders.’

So to this Australian of Sinhalese origin – Aborigines are a closed society. To me, Aborigines who remain/ed within their own tradition – are self-sufficient. In essence therefore Mr. Mahindapala is confirming that the Jaffna Tamil is as self-sufficient as the genuine Aborigine to whom Australia is the only Home. Hence in his own way Mr. Mahindapala is confirming that if one were to relate and ‘grade’ – Aborigines are more Australian than any  Prime Minister of Australia known to me. They certainly are more Australian than Mr. Mahindapala who seems to have migrated to Australia for economic reasons – the outer form of generic  culture. The way a big body may hide a small mind, Mr. Mahindapala may be trying to hide the small status of his own home community by using big economic rulers.  Those who show more economic prosperity than they have actually earned – end up contributing to mental disorder in themselves as well as in their community.

Australia is made up of many independent indigenous cultures as well as Common Australian culture developed by every person to whom that Land called Australia is Home. The indigenous part is carried in the heart as feelings. The Common part is expressed to relate to each other. Such expressions need to be regulated through common law – towards a common mind. Common minds work in harmony.

It is true that there are parts of Northern & Eastern Sri Lanka which until recently were  largely untouched by Common Law and its custodians. But, to the extent such groups were largely self-sufficient – no one has the authority to enforce an ‘outside’ law on them. To the extent these traditional communities were interfered with by ‘outsiders’ the karma is returning to them.

I am currently in Thunaivi – which has its own unique culture. People of Vaddukoddai town ask me whether I do not get disturbed by the  open expressions of dissatisfaction by the People of Thunaivi and  – I say – ‘no’ - that I am an observer of such culture and not an ‘insider’. But I am also insisting on MY rules being followed when the folks use our temple facilities – which are legally ‘private’. Initially there was resistance but gradually when they realized that I did not seek the Police except when they went to Police – there was acceptance that the Temple was not general but Common as per MY policies. In turn I am particular not to be seen to be favorable to one over the other for similar offenses.

Marriage and its laws are not firmly practiced by the folks of Thunaivi – especially by young ones. Australians have De Facto principles and laws to support them under such circumstances. But the folks of Thunaivi are driven largely by their own local culture which would rank rather low in Jaffna cultural hierarchy.  The caste system facilitated the older generation to connect to the mind of various cultural groups within Jaffna society. Even now, the Thunaivi folks who respect the higher caste living around this area – demonstrate a stable mind order. Not so the younger generation which has very little leadership beyond economic measures.

As per current news, our Australian High Commissioner to Sri Lanka, is reported to have stated as follows:

[In the future, Australian development cooperation will be used to help create job opportunities in the private sector for unemployed women and men", she revealed adding that  her government  would continue to support women’s economic empowerment through better access to training and work as well as by helping to tackle gender based violence, which  would not only address inequality but generate significant economic and social dividends.]

To me – as an Australian, I have already achieved this in Thunaivi – not by ‘external’ method but by being part of them to the extent I am able to project their expansion through their own internal motivation. If Australians to whom Jaffna is not home seek to use the economic pathway – they are likely to promote reverse discrimination. This morning when I needed general labor to lay pipelines for additional security-camera wires – I asked one of the guys who was disciplined by me to do the work. He came with his friend and I asked him to come alone – with his father in his mind. He tried to include his friend – but I declined to approve the friend. The job was completed satisfactorily before the expected time. The father respects me and that was shared naturally with the son. Thesawalamai Law unique to Jaffna Tamils was codified towards this Traditional mind connection through which the essence of the discoveries about their home-groups flow from one to the other. Without that hierarchy – we need to wait until independent, objectively measurable outcomes are published by the other side. If that Common mind had existed at the Political leadership level – we would not have ‘seen’ the war led by armed rebels.

Laws help us to become Common-minded. Likewise, when we are driven by the outcome in crafting  laws– those laws are separating forces. Hence Lord Krishna said ‘to do our duty and leave the returns to His system’. I am in Thunaivi when I am writing this and to the extent of my belief – Lord Krishna Himself is the basis of the culture of this part of Sri Lanka. The indigenous may call this culture – Thunaivi-culture and the likes of Mr. Mahindapala may call it Jaffna-culture. To me it is as global as Lord Krishna Himself. I felt that when Mr. Ranil Wickremesinghe made his declarations about International involvement in Sri Lanka’s war inquiry – while his feet touched the Sacred Land of Guruvayur – he was speaking as Jaffna Tamil – as if he was assuring me – reading his message as Jaffna Tamil - that he was also part of Jaffna.

The Jaffna Tamil who has sacrificed much for higher education has lost heavily due to the war. Any solution needs to balance the equation of cause and effect – including to the global minded Jaffna Tamil who harnessed global powers to escalate the conflict to global level, virtually from zero government support.  It must not take value away from indigenous Tamil groups to whom that local land is the only home known to them. In fact every person who uses this part of the land for current purposes – needs to attribute credit to those indigenous groups who are the root forces of manifestations on this land. Nothing happens without them.

I have been amazed by the depth of culture revealed by the Law of Thesawalamai. This law may not seem stylish and contemporary. But when studied deeply – it  guides the mind just as steadily as the best contemporary law would.

The hasty mind driven by cheap publicity – would have difficulty appreciating this deep value unique to Jaffna.

All indigenous cultures promote diversity and the paths would merge at the destination. It’s a shame that a migrant to Multicultural Australia is unable to appreciate this value and is promoting separation in both countries. A truly wholesome Sri Lankan would have identified with our  path of Diversity and Mr. Mahindapala is actually letting down Australia. Welfare mentality? Not for Sri Lanka please.  We are looking for Commoners and not Separators please!
Posted by Austms at 00:44